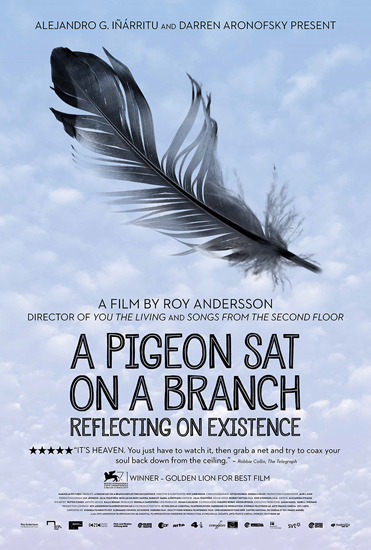 A PIGEON SAT ON A BRANCH REFLECTING ON EXISTENCE

It’s hard to describe the brilliant, life-affirming films of Swedish director Roy Anderson. It’s easy to say his films are comprised of snippets of seemingly unrelated moments showing ordinary people going about their often-benign lives. But that’s not really fair because his films are so meticulously constructed and crafted, the resulting accumulation of images and scenes triggers an oddly exhilarating emotion. It’s a powerful virtual experience that embeds itself into one’s own and rises at unexpected moments days, weeks, even years later. Does that make sense?
I was profoundly moved by Anderson’s last film, the perfectly titled YOU, THE LIVING, and have thought of it hundreds if not thousands of times since seeing it several years ago. His films seem to have no agenda but to show us in a fresh way the awe, wonder and strange paradoxes of existence itself, even at its most banal.  As a species, it’s nice to be of reminded of fleeting moments an emotions so ephemeral, yet shared by the entire human family. 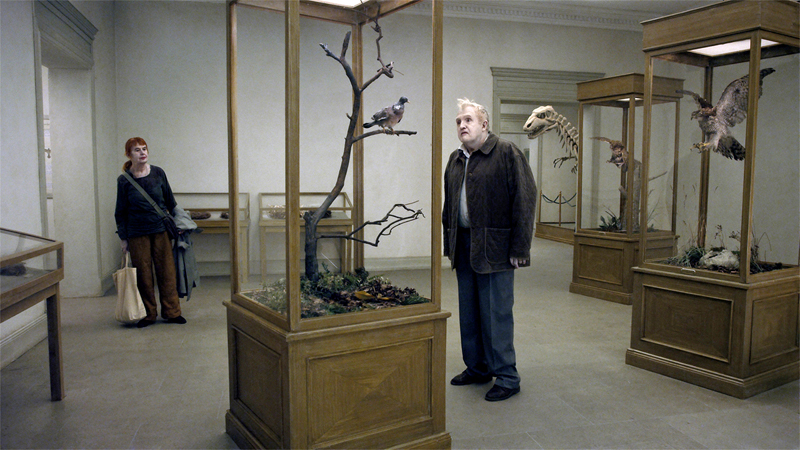 The always-static camera and the muted pastel colors of the artfully designed sets in which actors made their uniquely choreographed moves mesmerized me. The subtle ambient sounds further enhanced every scene.

Anderson’s latest masterpiece again lives up to the title. Metaphorically speaking, the entire film is as if a pigeon on a branch views human life.  An image established in a museum exhibit near the beginning.

The story, such as it is, is kind of built around Sam and Jonathan, two sad-sack salesmen peddling novelty trinkets.  This wondrous existential comedy quivers between the comic and the tragic, the grand and the minute, the essential and the hackneyed. I love how Sam and Jonathan meander through a dreamlike landscape of absurdist episodes that penetrate and spotlight the human condition. Are they manifestations of Don Quixote of Sancho Panza or perhaps Beckett’s Vladimir and Estragon? Or are they a variation of Stan and Ollie?

The surprise and delight of the scenes and images, some horrific others darkly comic, are part of the panorama of life itself — the essence of being is on the screen. It’s all a brilliant tapestry that resonates in a deep place. At least it did for me.

This non-narrative film is not for everyone, but it is a great example of a movie as art. It’s by far the most provocative film unspooling anywhere at the moment. And these moments are all we ever have. Now showing at Palm Desert’s Cinemas Palme d’Or. 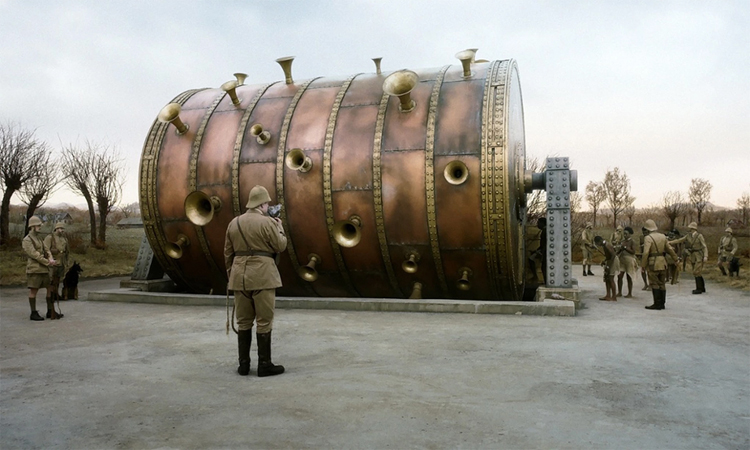 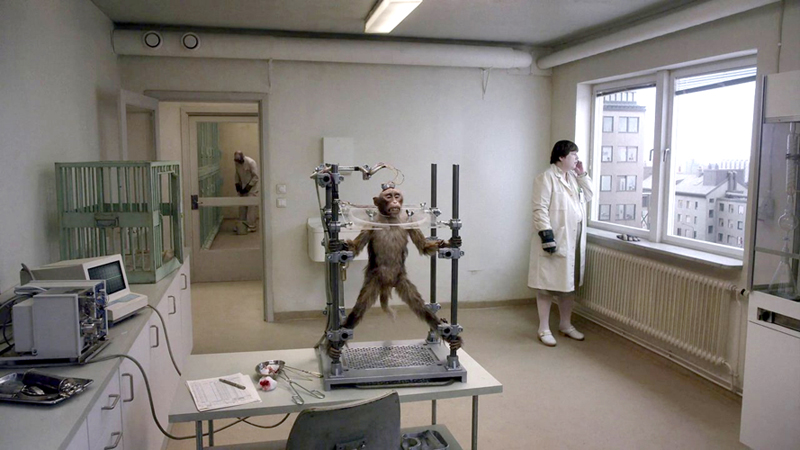 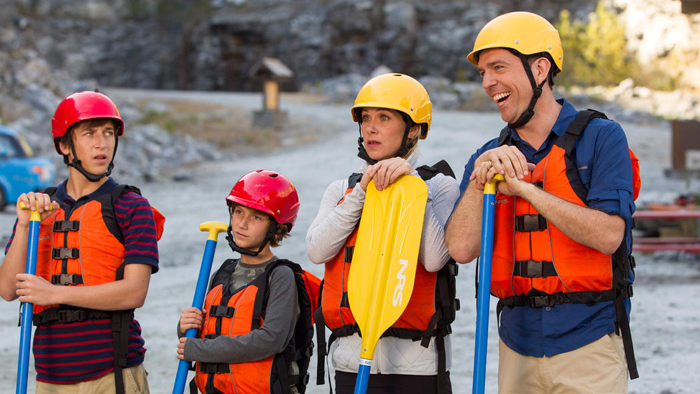 And now, for the other end of the wit spectrum…

How sad it was to see — or rather endure — such a monstrously unfunny reboot of a beloved and iconic comedy that has been embraced across generations since it was first released in 1983.

Harold Ramis’ big hit was adapted by John Hughes based on his original short story, “Vacation ‘58” in the National Lampoon. Who can forget Chevy Chase and Ellen Barkin packing the kids in the Wagon Queen Family Truckster and heading off to California’s most famous amusement park in a series of disastrously funny set-pieces all due to dad’s crazed optimism driving an insane determination to force his family to have a shared memory and bonding experience.

The new and decidedly grim aberration of the much-loved original plays on the good will of audiences. But beware: the tone is decidedly different. As written and directed by John Francis Daley and Jonathan Goldstein (co writers of the dud THE INCREDIBLE BURT WONDERSTONE, and intermittently funny HORRIBLE BOSSES 1 & 2), the movies seems to emphasize sexual molestation of kids and vile gags for its humor.

Ed Helms plays a grown up Rusty Griswold who tells his wife (Christina Applegate) that instead of their usual cabin vacation in Michigan, he wants to recreate his childhood road trip to Walley World.  Realistically, it makes no sense that he would even want to do this, the original trip being such a huge disaster. But Rusty mainly thinks it will revive their marital bliss.

The two young sibling brothers — Skyler Gisondo and Steele Stebbins, especially the latter – are naturals, in spite of the awkwardly staged and revolting attempts at humor the script demands. (I use the word ‘humor’ here very loosely since fecal matter and vomit vie for attention.) The brief cameo of a visibly bloated Chevy Chase and near silent Beverly D’Angelo further saddened me.

I did kind of like the next generation Griswolds’ choice method of transportation — the “Tartan Prancer,” or as Rusty calls it, “the Honda of Albania. The mutant hybrid has two gas tanks and a zany assortment of dangerous key-fob controls. But it’s a very long, unpleasant haul amidst a stream of gross gags that finally goes nowhere.  I was relieved when this barely funny, cringe-inducing road trip was over.  Now playing. 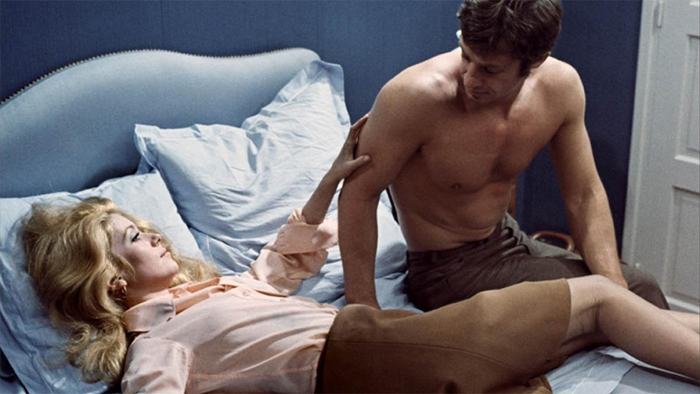 I had just finished screening Francois Truffaut’s 1969 Hitchcock-like twisty romantic thriller that takes place on Reunion Island, a remote place far off the coast of Madagascar, and one I had never heard of, when the news of a piece of a Boeing 777 wing debris, likely a piece of long missing Malaysian Flight 370, was found on the same island. It was a strange coincidence perfectly fitting the movie’s central mystery in which plantation owner Jean Paul Belmondo’s beautiful mail order bride (Catherine Deneuve) may not be what or whom she seems. In fact, she’s probably worse. Based on Cornell Woolrich’s “Waltz Into Darkness,” Truffaut’s dazzling, romantic, color noir is compelling and satisfying. It was filmed on Reunion Island locations, a nice touch of authenticity. I had no idea where the story was going but knew I was in good hands from the start. It’s vintage Truffaut and a treat for those who are not familiar with this title. This limited (only 3,000 units) Blu-ray is from Twilight Time Movies, a terrific resource for film buffs and collectors. Check out their other previously unavailable BD titles at screenarchives.com