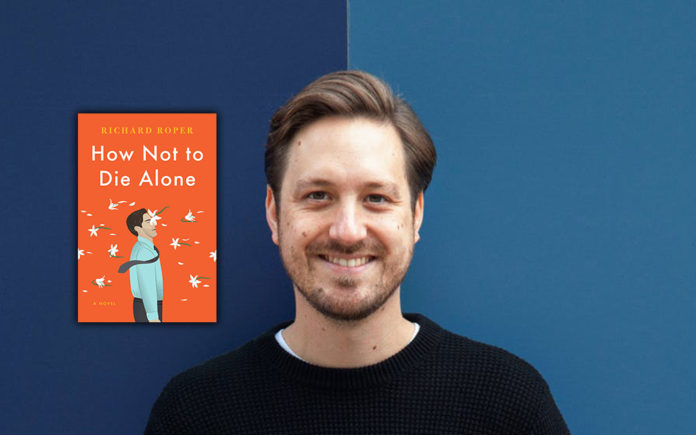 Some studies show loneliness is increasing to potentially epidemic levels.  Older folks as well as younger people are feeling more isolated resulting in chronic health issues – depression, obesity, heart disease and early death.  In Richard Roper’s How Not to Die Alone (Putnam, 324 pages) one man must leave his comfort zone in order to embrace life.

The story takes place in England where Andrew works for the public health system in the “Death Administration” department where it is his job to find the next of kin for those who have died alone and have been forgotten.   If he cannot find family, he sees to the funeral arrangements and the removal of belongings.

When Andrew’s work in another area of the health department was eliminated, he moved over into the death services unaware of the job description.

As difficult as the job is, Andrew is good at it.  He goes to funerals, not because it’s required, but because he believes someone besides the Vicar should be in attendance.

Andrew’s few colleagues are a quirky and socially awkward bunch.  In order to keep his distance, while at the same time to engage in inane office small talk, Andrew inadvertently invents a family for himself.  It’s perfect to keep from talking about his own actual life.  But when the boss wants to bond with his “team” at dinner parties, Andrew is desperate to keep his job and his secret.

Life for Andrew begins to change after Peggy is added to the team.  She’s normal, is married with children, has a good sense of humor and has respect of the profound nature of the job.  She seems to understand Andrew and they get on splendidly. But as their relationship becomes more personal, matters get complicated since Andrew is “married.”

Stuck in a dreary routine, Andrew begins to see his own isolation and loneliness.  As he and Peggy talk about their work and the sad lives of those they must bury, he realizes he too will die alone – unless he chooses, and is able — to engage with the world.

This story is filled with beautiful, poignant and life-affirming moments.

Author Roper does a fantastic job making Andrew a real, well-developed yet sadly flawed individual.  Andrew is an eccentric loner who has been traumatized by life events.  He is surrounded by death, not only in his work, but within his birth family.   He is haunted by the past and he hides himself away avoiding people and relationships, while creating a fantasy life for himself of which he cannot let go.

I liked all the off-beat, odd-ball, out-cast personalities (and the dead) in this story and the challenges the living face in their own lives being so close to death and trying to make the most out of life.

This is Roper’s debut novel and he writes about death — and life — with humor, ease and courage.  He structures the story so the reader is quickly pulled into the strange world of death and those who must care for those who have left this world alone and forgotten.  I appreciate that Roper lets the themes surface naturally as the characters work, interact and face their personal demons.

Roper reminds me of the wonderful author and fellow Brit, David Lodge. Both writers bring a charming authenticity to our human condition.

Is loneliness a choice?  Being vulnerable is uncomfortable and takes courage to engage with the world’s strange human inhabitants.

Death is coming for us all.  Will you be alone and forgotten? How will you be remembered?