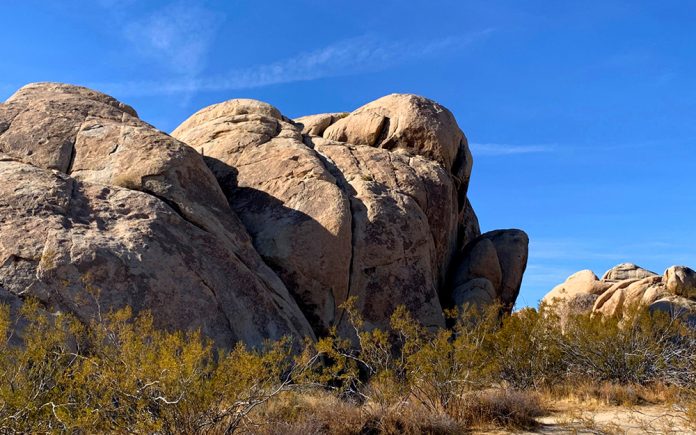 As you walk across the spectacular landscape that is Joshua Tree National Park you can’t help but to be captivated by the impressive rock formations. Massive rock piles cover the park’s 800,000 acres. They’re arranged in such a way that it seems more like intentional art than natural erosion. These remarkable rock formations came to be in their present state over the course of millions of years.

HOW DID COLOSSAL BOULDERS END UP AT THE TOP OF TALL ROCK TOWERS?

Plate tectonics and volcanic activity are responsible for what we see today. Present day Joshua Tree sits on the edge of the North American Plate. Over 200 million years ago, the North American Plate collided with the Farallon Plate that sat under the Pacific Ocean. The denser r Plate was forced under the North American Plate- a geological process called subduction. The friction from the subduction caused the surrounding underground rocks to melt and form magma plutons. These magma chambers eventually cooled underground into granitic rock. While still below the surface, the hardened rocks cracked as the result of pressure, plate movement and groundwater. Cracks formed both horizontally and vertically, creating rectangular pieces. Ground water then seeped into these cracks and turned the nearby rock into a soft clay which was eventually washed away.  These rectangular pieces rounded at the edges much like what would happen if you were to put an ice cube under running water. The result was individual spherical pieces of granite. Above ground, the top soil began to erode away. As the granitic rocks made their way to the surface, they settled into piles on top of each other creating the extraordinary rock towers we see today.

As the cracked granite made its way closer to the surface, it continued to erode as the result of groundwater and acidic soil from decaying plants. Skull Rock- perhaps the most famous rock in the park- formed its deep eye sockets this way. While still below the surface, Skull Rock’s vulnerable edges eroded away. Soil and water sat in shallow pools around the rock’s “eye sockets” and changed the chemical compound of the granite, which eventually eroded away. By the time the rock came to the surface, it already resembled a human skull sealing its fate in its future name.

IT’S NOT OVER YET

Geological processes are continuing to transform Joshua Tree National Park and eventually more rock piles may reveal themselves. The north-west slope of Ryan Mountain is an excellent example of this. Here, you can see granite rock piles protruding out of the overlying soil- a metamorphic rock called pinto gneiss. As flash floods, wind, and other severe weather continue to carve away at Ryan Mountain, the granitic rock formations will eventually reveal themselves. More of Joshua Tree’s hidden treasures will be unearthed.

Contributing Writer and Photographer for:

Conservation Ambassador for The Living Desert