The best show in town, certainly the most entertaining, is the Academy Award© nominated short “Animated,” “Live Action” and “Documentary” films now playing at Cinemas Palme d’Or. In spite of their abbreviated running times, these films have the power to astonish, provoke and delight. I was surprised by the sublime humor and fierce morality of several stories and delighted by the often beautiful composition and design of others. I can’t recommend these often hard-to-find, wonderful, compact films from around the world strongly enough. I’ve included images and brief descriptions of the films that especially impressed me. 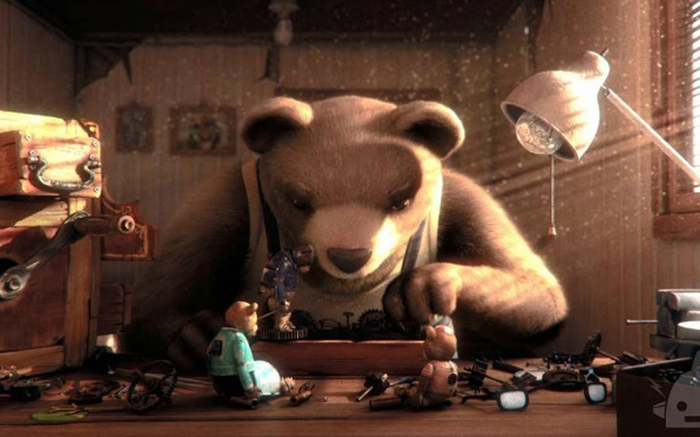 A bear wants to escape from the circus and reunite with its family. 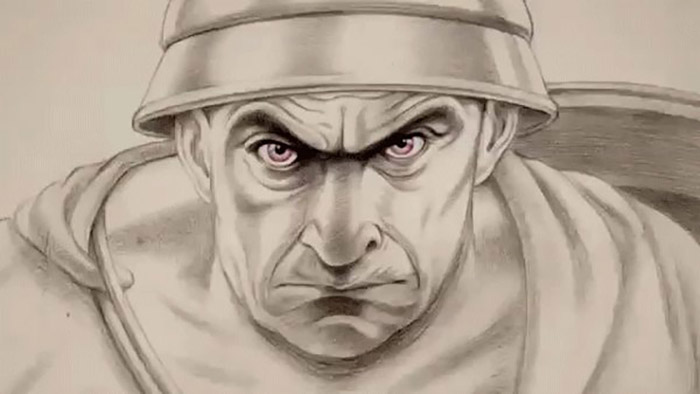 With no dialogue and an emphasis on natural sounds, a small girl bears witness as warriors battle to death during the Spartan-Athenian wars of 2,400 years ago.

WE CAN’T LIVE WITHOUT COSMOS

Two best friends have dreamed since childhood of becoming cosmonauts, and together they endure the rigors of training and public scrutiny, and make the sacrifices necessary to achieve their shared goal. (Konstantin Bronzit) – 16 minutes/Russia. 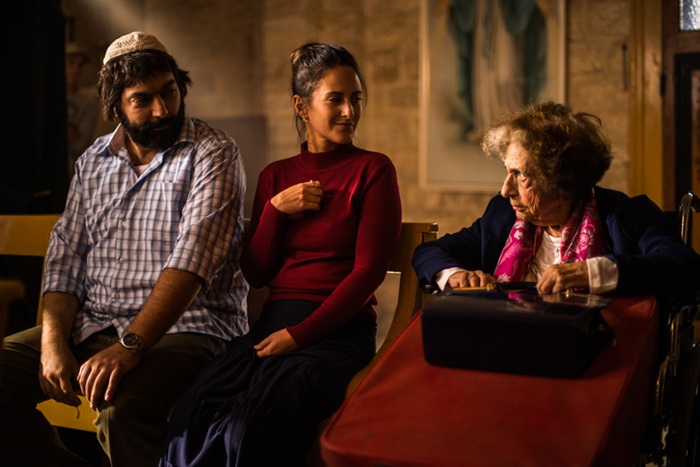 Five nuns living in the West Bank find their routine disrupted when the car of a family of Israeli settlers breaks down outside the convent. Unable to use the telephone due to Sabbath restrictions, the family needs help from the nuns, but the sisters’ vow of silence requires them to work with their visitors to find an unorthodox solution. (Basil Khalil and Eric Dupont) – 15 minutes/France, Germany, and Palestine/Arabic, English, and Hebrew. 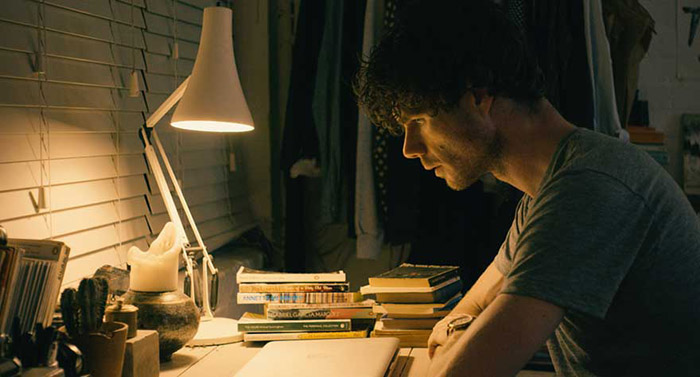 For a lonely typographer, an online relationship has provided a much-needed connection without revealing the speech impediment that has kept him isolated. Now, however, he is faced with the proposition of meeting his online paramour in the flesh, and thereby revealing the truth about himself. (Benjamin Cleary and Serena Armitaget) – 12 minutes/UK/English.

EVERYTHING WILL BE OKAY? (Patrick Vollrath) – 30 minutes/Austria/German 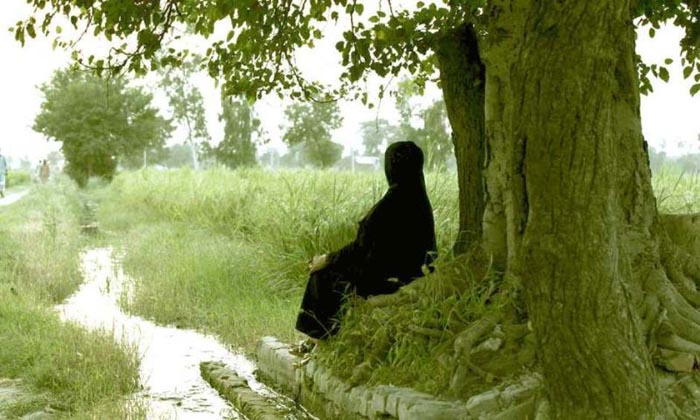 A GIRL IN THE RIVER: THE PRICE OF FORGIVENESS

Every year, more than 1,000 girls and women are the victims of religiously motivated honor killings in Pakistan, especially in rural areas. Eighteen-year-old Saba, who fell in love and eloped, was targeted by her father and uncle but survived to tell her story. (Sharmeen Obaid-Chinoy) – 40 minutes/Pakistan/Panjabi. 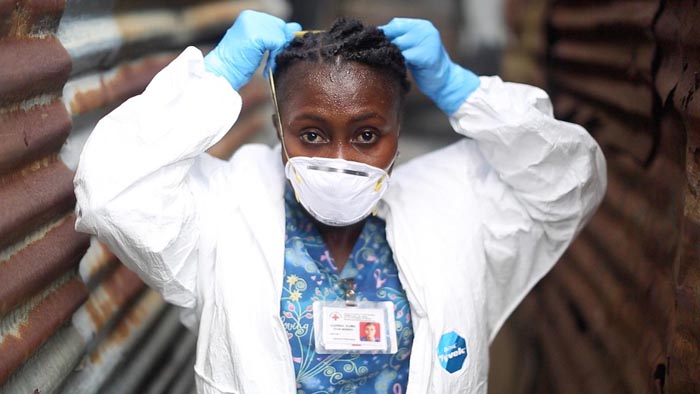 Tasked with collecting the victims at the height of the Ebola outbreak, these body collectors have arguably the most dangerous and gruesome job in the world. Yet despite the strain they emerge as heroes while the film explores their philosophy and strength. The story is told on the ground in Monrovia, Liberia through the eyes of the only female member of the team, who reveals the heartbreaking, lifesaving work of removing bodies from loved ones in order to halt transmission of the disease. (David Darg and Bryn Mooser) – 13 minutes/Liberia/English.

Also: CHAU, BEYOND THE LINES (Courtney Marsh and Jerry Franck) – 34 minutes/USA and Vietnam/Vietnamese.

Don’t miss this special showing of these remarkable short films that are not afraid of confronting fear or conveying joy.  Cinemas Palme d’Or.

FOR THE HOME THEATER: 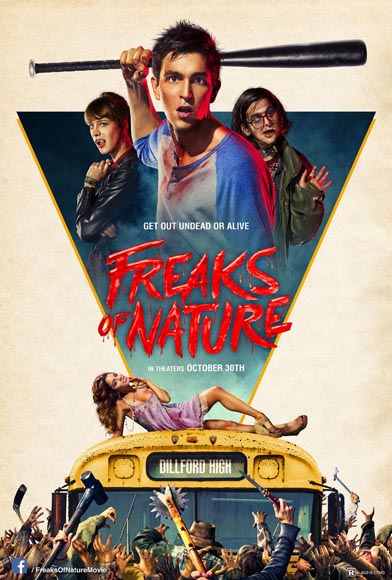 Welcome to Dillford. Three days ago everything was peaceful and business was as usual. For Dillford that meant the vampires were at the top of the social order, zombies were at the bottom and ordinary humans were getting along in the middle. But this delicate balance was ripped apart when the alien apocalypse arrived and put an end to the near perfect harmony of Dillford. Now, it’s humans vs. vampires vs. zombies in an all-out blood-sucking, brain-eating, vamp-staking mortal combat – all of whom are on the run from the aliens! Will three teens – one human, one vampire and one zombie – Dillford’s last best hope — be able to fend off the illegal, interplanetary alien visitors and restore order to this “normal” little heartland American town?  Sony.  Blu-ray. 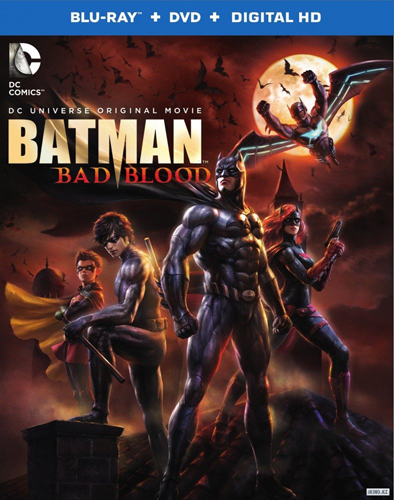 When Batman goes missing, it will take the entire Bat family to keep the peace in Gotham City and unravel the mystery behind the Dark Knight’s disappearance.

The sudden emergence of powerful and malevolent new villains – Firefly, Tusk and Killer Moth — in Gotham City forces Nightwing and Robin to take crime fighting into their own hands – all the while simultaneously searching for their missing leader. But they are not alone for long. New super heroes Batwoman and Batwing – each armed with his or her unique sensibilities and powers — arrive in Gotham to assist in the cause. But as this new “family” strives to find its own dynamic, chilling clues lead the group to suspect the unthinkable: Has the Dark Knight gone to the dark side? Now it’s up to the Bat team to uncover the truth before Gotham City falls prey to its greatest threat yet. The combo package includes featurettes “Putting the Fight in Gotham” and “Expanding the Family of Batman” plus two bonus cartoons.  Warner bros.  Blu-ray.