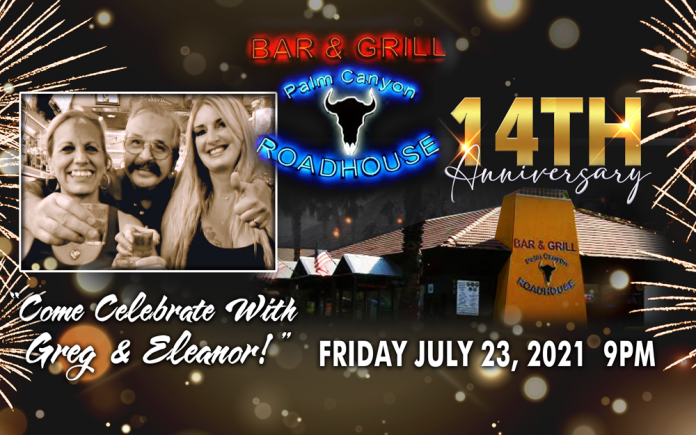 For the last 14 years, Palm Canyon Roadhouse in Palm Springs has been regarded as a local hotspot for high-end entertainment with the longest running jam session in the entire desert empire. From hosting numerous charity events to being presented a prestigious award by Anheuser-Busch that very few bars are given, this desert venue is among the best in the Coachella Valley. 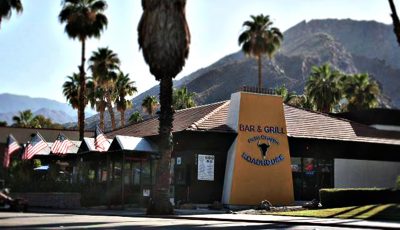 Owners Greg and Eleanor Rivers are excited to celebrate the 14th anniversary of Palm Canyon Roadhouse and are hosting a celebration on Friday, July 23, starting at 9 p.m. with live entertainment provided by the Lucky Tongue Band. While Palm Canyon Roadhouse has garnered an impressive reputation, it goes to show that the staff, patrons, and musicians all collectively worked together to make the bar the powerhouse of a venue that it is today.

“I have to say that I and my staff owe a debt of true gratitude to my wife Eleanor for her never-wavering guidance. Whatever the cost, she always gets the job done and stands ready to rise to each new challenge—countless years of being the first one there in the morning and the last one there at night and she’s still game. For being the calm voice of reason during the frequent storms that are by nature my personality, I love her,” stated Greg. 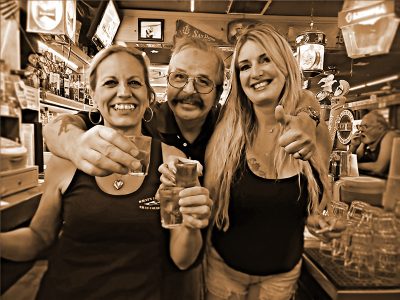 The coronavirus pandemic has greatly affected live entertainment over the past year, but Greg is grateful to see all the musicians who regularly play at the Palm Canyon Roadhouse returning after such a long absence. He insists that the venue could not have survived the last 14 years without the help of some of its veteran players like Eddie Larkin (bass), Andy Fraga (drums), Tim Mcfall (drums), and Brad Mercer (guitar/vocals).

“These are guys who’ve been in the game forever and are perpetually happy musicians and consummate professionals. They’ve seen it all and always bring their A-game. Nothing shocks them and I’m lucky to count them among my friends,” said Greg. 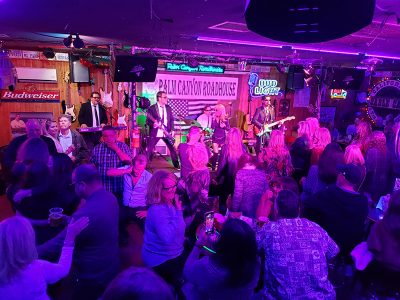 Local artists have voiced their appreciation for the Palm Canyon Roadhouse and the support the venue’s owners have extended to the music community. Singer/songwriter soloist and frontman for The Hive Minds, Derek Jordan Gregg, has hailed Greg as the unsung hero in the Coachella Valley music scene. He has credited hanging around the jam sessions when he first came to the desert as giving him a foot in the door to the local community, getting him to where he is at now. 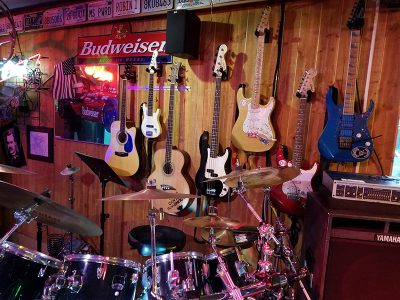 “From sending the Palm Canyon Roadhouse Van to pick up Sean Poe [Hive Minds drummer], myself and the five thousand dollars-worth of gear that we had played to win, to taking me to the hospital to get stitches that one time after things got a little out of hand, I’m glad Greg’s getting a little recognition. He’s a class act and the patron saint of local musicians,” praised Derek.

Sunday jam sessions have been a staple of what the Palm Canyon Roadhouse has offered since its inception. Afternoons start off with Mikole Kaar’s show and his personal brand of jazz, as he is Greg’s favorite sax player. Then at 6 p.m., the vibe changes over to a more rock and bluesy country-oriented jam session. This is hosted by a new guest each week to keep the jams fresh with Gene Beavers holding down the bass line and Jay Lewis on drums. 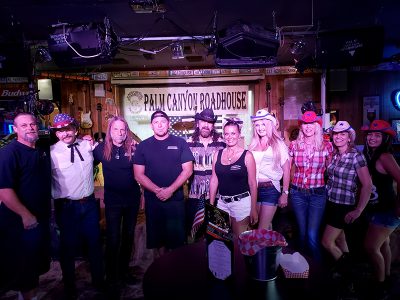 There have been many celebrity guests that made unscheduled appearances at the Palm Canyon Roadhouse over the years. The Marshall Tucker Band has dropped in to jam a couple of times as well as members from the New York Dolls, Vixen, Trini Lopez, and Beau MacDougall. Christina Millian even filmed a video at the Roadhouse. Other artists like Steve Miller, Phil Rudd from AC/DC, Mickey Thomas of Starship, Cindy Williams, and Cheech Marin have dropped in just to hear the music, or enjoy a bite to eat and a cocktail. Greg has a fond memory of encountering Nora Jones one afternoon as he was tending the bar and she came in by herself for lunch, and was delighted to find her personality sweet and down-to-earth. 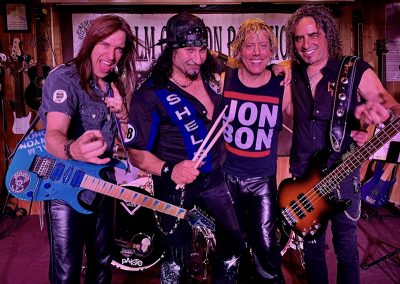 “Every now and then we’re blessed with real virtuoso moments by the likes of someone like Mike Finn or Pete Sutter, two very differently styled but equally talented guitarists. They’re the kind of guys that, without seeing it coming, will get into a moment where they just transcend the stage they’re standing on. You look around the room and see people with their drinks poised halfway to their mouths and nobody is moving, they’re just staring, wide-eyed at Pete or Mike and you know you’re in the presence of a truly great musical moment. They have taken possession of every soul within hearing range of that riff. It finally passes and the only acknowledgement of it even having happened is perhaps the ghost of a smile on the drummer’s face. Very subtle, but you know something intangible, a tiny slice of excellence, something you’ll never be a part of, passed between those men with ease. And that moment makes it all worth it for me,” explained Greg. 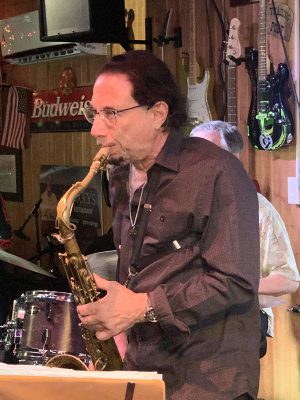 The Palm Canyon Roadhouse also plays some of the best country music, with the likes of Roger Lemieux and Greg’s good friend Marc Valverde, who toured the country as bass player/backing vocals for Johnny Lee back the 80s, as well as crowd favorite, Grady James, who is taking the country world by storm since he moved to Nashville. Grady will also perform onstage for the Oasis Music Festival scheduled for this coming October.

There are two people that Greg considers to be his secret weapons and who work tirelessly behind the scenes to keep all the big wheels and cogs turning. Matt Barnes is the go-to guy for anything and everything sound-related. The Palm Canyon Roadhouse has invested a pretty penny in their house sound system, which Greg likes to run personally on the weekends, but he never purchases a piece of equipment without Matt’s input. 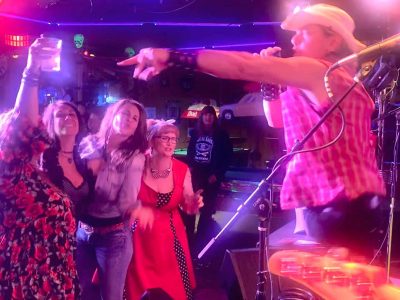 “Many has been the Saturday night, five minutes to show time with a packed house when suddenly something in the main system goes down and we are without sound. Naturally I feel instant panic, but put in a call to Matt who’s always finds me the solution in minutes via telephone and nobody is the wiser. He is a fine tech, a sincerely good friend and true gift from above.  If he’s smart, one day he’ll block my number,” revealed Greg.

The second person in Greg’s arsenal is Steve Johns, entertainment director of the Palm Canyon Roadhouse, without whom none of this would be possible. Steve and Greg met just shortly after the Roadhouse opened, and struck up a fast and easy friendship. Steve hires all the entertainment, Saturday night shows, Sunday guest hosts, tribute shows, fundraisers, and festivals. 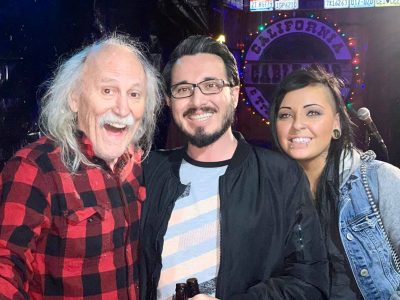 “His insight into the bar/club business is remarkable. He even wrote a book about it! Rolling up countless miles on his car, traveling from venue to venue always looking for a new act, contracts, negotiations, phone calls, e-mails, social media, videos, it never ends.  Where others would crack under the strain of the sheer volume of it all, Steve just keeps that same easy, low-key manner, never raises his voice, steers the ship and gets us all to the place he knows we need to be, even when others can’t see beyond the fog.  I learned long ago not to second guess him!” said Greg.

With the endless support the Palm Canyon Roadhouse has received, Greg only hopes that the venue will continue to prosper and that people will still be talking about the Roadhouse for another 14 years. The memories created by the talented and hardworking individuals inside the venue are more than Greg could have ever anticipated.

“We could never have made it this far without the best staff an owner could ever hope for. I don’t always understand them, nor do I want to. It just works better that way. Bartenders Dale, Melody and Michelle function on an ethereal plane I’ll never reach and that’s probably best. They know what they’re doing and who am I to stink up their game? Security head Bobby keeps us all safe, Chef Steve keeps the kitchen running smoothly. You couldn’t find two men better suited to their jobs, always ready with a laugh, and there are no bad days when they’re around,” stated Greg.

Sunday night Jam starts at 6:00pm (The longest running Jam in the Desert Empire) Hosts this week are Jason Zembo and Aiden Schaefer of Pescaterritory.