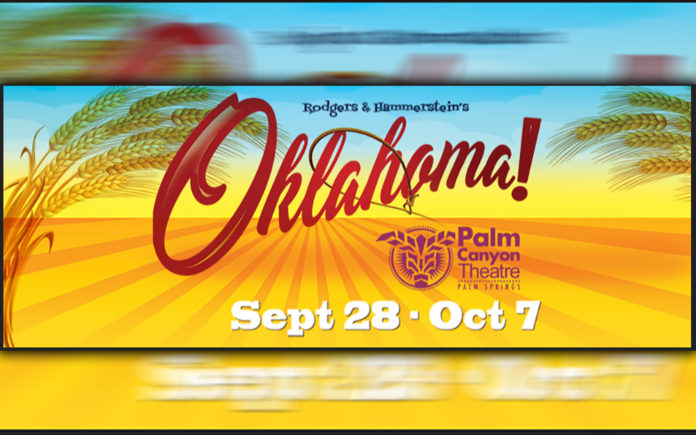 The Palm Canyon Theatre (PCT) is riding into its 22nd season in uptown Palm Springs with Oklahoma! The very first collaboration between composer Richard Rodgers and librettist Oscar Hammerstein II, remains one of musical theatre’s most beloved and recognized productions. For PCT, this show will provide cultural entertainment with an emphasis on intergenerational education for which the theatre is known.

In 1997, the Layne Family (William, Sylvia, J.W., and Se) created the nonprofit regional repertory theatre on the foundation of offering live stage production education. As the family and community volunteers renovated the Frances S. Stevens School at the corner of Palm Canyon Drive and Alejo Road, PCT offered its first summer camp to children ages 6 and up. From that year, on, PCT’s artistic directors continually invite summer camp students to perform with professionals and talented community members in main stage productions during the regular season. This year is no different. 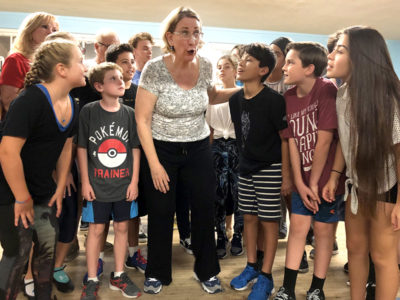 Oklahoma! opens on September 28 and will include a cast of 39. Sixteen of them are local kids, ages 8-15; twelve of them participated in the theatre’s 6-week summer camp this past June and July. One camper, Abby Berry is a third generation PCT thespian. The eight-year-old is following a Berry family tradition of participating in PCT productions that began when her grandmother, Marsha Berry, enrolled her kids (Abby’s future father and aunt) in the first PCT summer camp in 1997. Marsha and her kids, Justin and Kayla, were only 11 and 8, respectively, when they volunteered alongside their mother to remove the old gymnasium floor in the Frances S. Stevens School, which would become PCT’s 215-seat sloped auditorium. Abby is also quite literally following in her aunt’s footsteps in Oklahoma! as she is wearing the same shoes Aunt Kayla wore in 42nd Street on the PCT stage twelve years ago. Abby is part of the ensemble of dancers and singers, and she’ll be playing alongside her grandfather, Alan Berry (playing Andrew Carnes), 63, who has been an active company member and volunteer at PCT since 1998.

“I feel like I’m picking up where I left off with my daughter, when we would perform in PCT shows together,” said Alan. “It’s the thrill of my theatre career to have a third generation on stage with me! Knowing that I would get to ‘play’ with Abby almost every day at the theatre for the last five weeks… we have both been smiling from ear to ear since the first rehearsal.”

Also in the show are eight College of the Desert students. “Acting students at COD have discovered that also participating in PCT shows gives them the nonstop performance experience they crave,” said Se Layne, PCT co-artistic director and COD adjunct professor.

Included in the intergenerational cast of Oklahoma! are leads Christian Quevedo (Curly) 28, who is pursuing a degree in vocal arts with the goal of performing in the Opera and Kaitlyn Farley (Laurey), 26, who first performed on the PCT stage at age 12. Farley is a professional vocalist and teacher and was the 2016 Grand Prize Winner of McCallum Theater Institute’s Open Call. Suzie Thomas Wourms, 64, will reprise her role as Aunt Eller. Wourms has been acting and volunteering at PCT since 1998. Paul Grant (Jud Fry) is 50-something; he has made his living in professional theatre for 25 years and currently has a gig as singing cruise director. Anthony Nannini (Will Parker), 29, who has acted from Los Angeles to New York City, has been seen in countless productions at PCT. Emilia Jimenez (Ado Annie), 23, is in her fourth PCT production; she has also performed on several college stages. Frank Catale (Ike Skidmore), 65, has a long list of stage, film and television credits. Ashley Davies (Gertie Cummings), 20, is a COD student now in her third season with PCT who plans to pursue acting as a career. Herb Schultz (Ali Hakim), 56, is an administrative professional specializing in governmental affairs, but he has continually found time to fulfill his passion for theatre on stages from coast to coast. Brandy Valentine (Dream Laurey), 31, is an award-winning dancer who first put on the ballet slippers at seven years old. Sheldon Safir (Cord Elam), 70, is an east coast transplant who began performing at 10 years old. This is Safir’s first production with PCT, and he proudly claims the oldest cast member billing. Together, these talented actors, dancers and vocalists of all ages are teaching each other and creating a memorable rendition of Oklahoma!

Oklahoma! opens Friday, September 28 and runs through October 7. Show times are 7 p.m. on Thursdays, and 8 p.m. on Fridays and Saturdays. Sunday matinees start at 2 p.m. Tickets are $32-$36. Student tickets are $15, with valid ID; student tickets must be purchased at the Box Office. For tickets, call the PCT Box Office at 760-323-5123 or order online: PalmCanyonTheatre.org. The Palm Canyon Theatre is located at 538 North Palm Canyon Drive, at the corner of Alejo Road and Palm Canyon Drive. Box Office hours are Tuesday-Saturday, 9 a.m.-4 p.m.