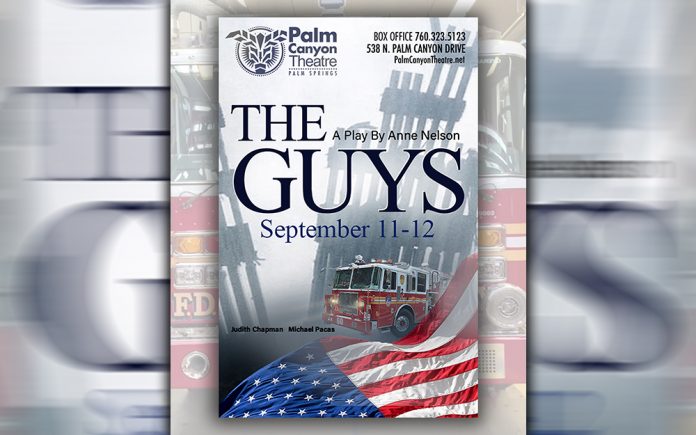 To commemorate the 20th Anniversary of 9-11, Palm Canyon Theatre (PCT) will present The Guys, a play by Anne Nelson about the aftereffects of the collapse of the World Trade Center on September 11, 2001. The show will run at PCT on September 11 and 12, 2021.

PCT’s production of The Guys will star Judith Chapman, who will reprise the role of Joan, an editor, and Michael Pacas, who will portray Nick, a New York Fire Department captain. After losing eight of his men in the collapse of the World Trade Center, Nick enlists help from Joan to prepare their eulogies. Hearing details of each of their lives, Joan helps Nick compile the difficult, heartfelt speeches that honor “ordinary, great guys in an extraordinary situation,” while he navigates his own emotional response.

Growing up the daughter of a retired Air Force General, Chapman understands and deeply respects the sacrifices of our country’s military and first responders. Chapman has performed on stage and screen since she was 14. She currently plays Gloria Bardwell, an ever-scheming mother, on “The Young and the Restless.” Pacas has appeared in countless valley productions since moving to the area in 2016. Pacas and Chapman are reuniting on the PCT stage, after appearing in the 2018 production of Blithe Spirit.

To honor all who responded to the call and those who perished on that tragic day, The Guys will run September 11 and 12. Show times are 8 p.m. on Saturday and 2 p.m. on Sunday. General admission tickets are $36; seniors are $32; students are $15. All active police, firefighters and military can call the box office for complimentary admission, based on space available.

The health and safety of our community, audiences, artists and staff is very important to PCT. Due to the recent increase of the Covid-19 Delta Variant, proof of vaccination or a negative test result (within 72 hours) is required for admittance into the theatre. Face masks are required indoors, per a City of Palm Springs ordinance.

Judith Chapman joined the cast of “THE YOUNG AND THE RESTLESS” in January, 2005, in the role of Gloria Bardwell, the scheming mother of troubled Kevin Fisher (Greg Rikaart) and longtime Genoa City resident Michael Baldwin (Christian LeBlanc).  Chapman, the daughter of a retired Air Force General, was born in Greenville, S.C. but spent most of her childhood living outside the United States.  She began her acting career at the age of 14, working in commercials and “Spaghetti Westerns” while living in Spain.  After graduating from Stephens College with a degree in theatre, Chapman headed to New York, where she began working in commercials and theatre.  She also joined the prestigious Actors’ Studio, and landed the role of Natalie Hughes on the daytime drama “As the World Turns.”  She went on to enjoy a long career in the world of daytime drama appearing as Charlotte Greer on “Ryan’s Hope,” Ginny Blake Webber on “General Hospital,” Sandra Montaigne on “The Fall Guy,” “Magnum. P.I.,” “Silk Stalking,” as well as the telefilms “Mortal Fear,” “Farrell for the People” and Five of ME.”  She also hosted the travel show “Hello Paradise.”  Chapman also appeared in several feature films, including “28 Days,” “The Sweetest Thing,” “Night of the Running Man” and “Scorpio One.

After teaching several semesters at College of the Desert in Palm Desert, California, Chapman returned to acting with a new passion, as well as a desire to direct.  She mounted the play “The Belle of Amherst,” based on the life of Emily Dickinson, which she successfully toured through the United States.  She also directed “Jekyll and Hyde: The Musical,” “Equus” and “Born Yesterday” and performed in “Sordid Lives” and “Blythe Spirit.”  She also played Vivien Leigh in the West Coast Premiere of “Orson’s Shadow” at the Old Globe.  In 2007, she was recognized by the National Academy of Television Arts and Sciences with a Silver Circle Award, which honors members of the television community who have contributed 25 years to the industry.

Chapman also founded “The Troubadours of Daytime,” a theatre company of Daytime Actors who utilize their time, talent and love of the theatre to perform and raise money for organizations such as Kiva.org.  The troupe’s most recent project was a staged reading of Tennessee Williams’ classic drama, “The Night of the Iguana.” In August, 2011, Chapman began a national tour portraying Oscar-winning film star Vivien Leigh in the Los Angeles premiere of Rick Foster’s critically acclaimed one-woman play, “VIVIEN,” for which she garnered rave reviews.  The Los Angeles Times lauded, “It’s hard to imagine anyone playing the role (of Vivien Leigh) more convincingly than soap opera veteran Judith Chapman.  Her mastery of Leigh’s mannerisms… is uncanny.”  Backstage stated that Chapman “possesses the poise and intelligence to capture Leigh’s star quality, as well as her frailties,” and labeled the show “a bravura performance.”  Projects for release soon include the biographical drama film “King Richard,” starring Will Smith as Venus and Serena Williams’ father and “Dial Emme for Murder,” written by soap veteran Eileen Davidson and produced in conjunction with Palm Springs Women in Film and Television (PSWIFT). She will also direct “The Beebo Brinker Chronicles” at Desert Ensemble Theatre in Fall 2021. Chapman lives in Palm Springs, California.  She enjoys practicing yoga and traveling, and has visited many exotic locations, including India, Thailand, Sri Lanka and Nepal. 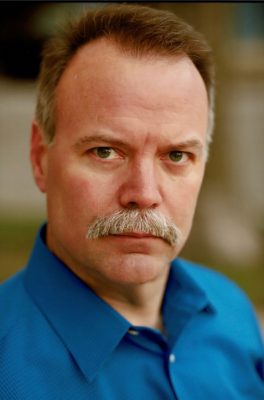 Michael Pacas recently appeared in Desert Rose’s production of THE GREAT AMERICAN TRAILER PARK MUSICAL. Palm Canyon audiences may recognize him as Charles from their production of BLITHE SPIRIT, which also starred Judith Chapman. Other local credits include Desert Theatreworks’ productions of THE WOMAN IN BLACK; THE SOUND OF MUSIC; THE 39 STEPS and HAIRSPRAY and Desert Rose’s productions of THOSE MUSCLEBOUND COWBOYS FROM SNAKEPIT GULCH; CLARK GABLE SLEPT HERE; TIMES SQUARE ANGEL and PAGEANT. Michael also appeared in Desert Ensemble Theatre’s musical revue, ON THE TWENTY-FIRST CENTURY. He directed Desert Theatreworks’ production of 12 ANGRY MEN and Palm Canyon Theatre’s production of WHO’S AFRAID OF VIRGINIA WOOLF? During the recent shutdown, Michael volunteered dozens of hours helping convert the defunct Zelda’s nightclub into the new Desert Rose Playhouse. He also arranged numerous online script readings utilizing actors from not only from the Coachella Valley, but from across the country. Later this season, Michael will appear at Desert Theatreworks as Max Biaystock in THE PRODUCERS and as Matt Drayton in GUESS WHO’S COMING TO DINNER. Michael dedicates his performance to the fearless and selfless first responders everywhere.