The Swedish pop group known as ᗅᗺᗷᗅ, topped the music charts from 1972 – 1982 with over twenty singles on the Billboard Hot 100 List and fourteen hitting the Top 40 List. Now, the Palm Springs Gay Men’s Chorus (PSGMC) will bring all of the Rock And Roll Hall of Famers hits to Palm Springs audiences in “Extrᗅᗺᗷᗅganza” for two performances only Saturday, April 25; 8:00p.m. and Sunday, April 26; 3:00p.m. at the Jewish Community Center, 332 West Alejo Road in Palm Springs.

With music and lyrics by Bjoern K. Ulvaeus and Benny Goran Bror Andersson and their female lead counterparts Agnetha Faltskog and Anni-Frid Lyngstad, their music found new life in the films Muriel’s Wedding and Priscilla, Queen of the Desert along with the smash Broadway musical, “Mamma Mia!”

The PSGMC will take you on a nostalgic journey with 17 of their incredible songs including: “Super Trouper”, “Fernando,” “Does Your Mother Know,” “Take a Chance on Me,” “Lay All Your Love On Me,” “Waterloo,” “Voulez Vous,” “The Winner Takes It All”, “Gimme, Gimme, Gimme -A Man After Midnight,” “Thank You for the Music” and everyone’s favorites “Mamma Mia” and “Dancing Queen.”

The foursome decided to record their first album together in the autumn of 1972, and sessions began on September 26, 1972. Agnetha and Annie-Frid shared lead vocals on “Nina, Pretty Ballerina” (a top ten hit in Austria) that day, and their voices in harmony for the first time gave the foursome an idea of the quality of their combined talents.

In early 1973, Stig Anderson, manager of ᗅᗺᗷᗅ, tired of unwieldy names, started to refer to the group privately and publicly as ᗅᗺᗷᗅ. Abba is also the name of a well known fish-canning company in Sweden, and itself an acronym. However, since the fish-canners were unknown outside Sweden, Anderson came to believe the name would work in international markets. A competition to find a suitable name for the group was held in a Gothenburg newspaper. The group was impressed with the names “Alibaba”, “FABB”, and “Baba”, but in the end all the entries were ignored and it was officially announced in the summer that the group were to be known as “ABBA”. “ABBA” is an acronym formed from the first letters of each group member’s first name: Agnetha, Björn, Benny and Anni-Frid. During a promotional photo, Benny flipped his “B” horizontally for fun, and from 1976 onwards the first ‘B’ in the logo version of the name was “mirror-image” reversed on the band’s promotional material and ᗅᗺᗷᗅ became the group’s registered trademark.

“This concert was a natural fit for our chorus, it’s fun, upbeat and our four sections of 1st Tenor, 2nd Tenor, Baritone and Bass are really enjoying harmonizing the lyrics. Now over 80 voices strong, our upcoming spring concert will be one of our best concerts yet,” said Douglas Wilson, Artistic Director, PSGMC.

For individual tickets and for best selection of seating in the Jewish Community Center, purchase your tickets now at www.PSGMC.com. 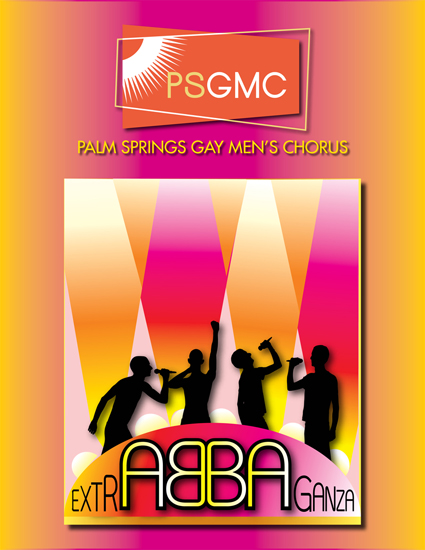