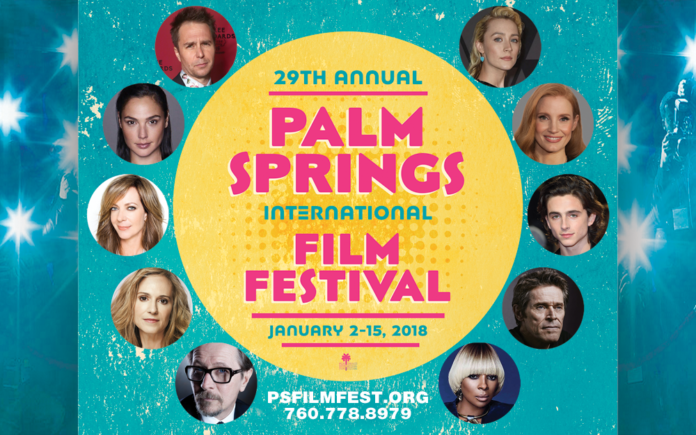 Argentina, Armenia, Mozambique, Kyrgyzstan, China, Canada and Japan these are some of the exotic places the 29th Annual Palm Springs International Film Festival will take you if you are willing to go.

This year, the Festival has 180 films from 77 countries across the globe with 31 genres to be shown during 433 screenings in 14 days at six different venues!

“For the next two weeks, we will be your tour guide, sharing insights and images from around the world, spotlighting diverse cultures from Africa to New Zealand,” said Harold Matzner, Chairman of the Board, Palm Springs International Film Society.

The journey begins Saturday, January 2, and runs every day, all day, through Monday, January 15.

Artistic Director Michael Lerman returns to the Festival for his second year.

“We try to speak to the current perspective, what’s happening right now in Buenos Aires and Tel Aviv, in Paris and Tultepec, in Brussels and Auckland,” said Lerman.  “The most important thing for us is to generate a dialog.  We want to be a place for discussion, a place of ideas and emotions surrounding film.  The program is packed full of crowd pleasers and thought provokers.”

The PSIFF is the place to be if you love cinema, culture and fascinating, well-traveled folks.

Over 135,000 people are expected to attend this year’s PSIFF!  So even standing in line is fun and a memorable part of the experience.  It’s a great way to make new friends while chatting with other moviegoers and film fans.

As is the custom, the GALA AND FILM AWARDS, kicks-off the Festival, Tuesday, January 2, 5:00.  It is the first award show of the season, and it continues to draw Hollywood’s best and most talented.

The Gala and Film Awards is the Palm Springs International Film Society’s biggest fundraising event.  The Film Society is a nonprofit organization that produces the PSIFF and operates other programs year-round.   The Gala event generates $1,000,000.

With all the glamor and glitz, the Gala is known for being relaxed, yet energetic and fun.   If you are not going to be at a table on the inside, there is the red carpet on the outside.

The OPENING NIGHT event is Thursday, January 4.  What better way to start a film festival than with a Steven Spielberg movie!

“The Post” stars Meryl Streep and Tom Hanks and tells the story of the first female publisher of The Washington Post.

Throughout the Festival, look for SPECIAL PRESENTATIONS in the PSIFF schedule or online.  It is quite possible that filmmakers and cast members may be present at selected screenings.

“The Polka King,” starring Jack Black screens only once on January 3, 7:00 at the Camelot Theatre.  This film is a comedy based in a true story.

There are two other Special Presentation screenings “Phantom Thread” and “In the Fade.” (See CVW PSIFF story page XX)

CINE LATINO — The 29th PSIFF is showcasing the year’s best Ibero-American films, which are eligible for the Cine Latino Award.

Each Festival has an international focus, and this year it’s Argentina with seven feature films.   In addition, there is a selection of over 20 Spanish-language movies.

The PSIFF print schedule at a glace is a beautifully color-coated and organized array of films, which makes it easy to find something interesting.

Check out the Modern Masters selections, which features seven films from international directors who set the bar for contemporary cinema.

There is a FREE COMMUNITY SCREENING sponsored by Desert Regional Medical Center.   “The Workers Cup” screens Saturday, January 13, 3:30 at the Annenberg Theater.  Check the PSIFF website for details on ticket availability.  In its eighth year, Desert Regional presents films that are uplifting and entertaining to a general audience.

NEW VOICES NEW VISIONS is an exciting competition, which showcases 10 films from emerging international directors bringing their first or second narrative features to the Festival.  PSIFF celebrates these filmmakers and selects a winner by a jury of festival programmers and U.S. distributors.

If you love a mystery, look for the PSIFF SECRET SCREENING.  No one will let on what the film may be, but Festival organizers guarantee it is a good one.

TALKING PICTURES is a PSIFF favorite.  This is what the Festival is all about at its core.  These programs include in-depth discussions with directors, writers and actors from the year’s top films.

A few to look for are: “Darkest Hour” with actor Gary Oldman screens January 3, 1:45 at the Annenberg Theater.  The directors of “An Inconvenient Sequel: Truth to Power” which follows Al Gore as he works to save the environment will talk about the film January 8, 10:00am at the Annenberg Theater.  “Three Billboards Outside Ebbing, Missouri” with actor Sam Rockwell is January 3, 1:00 at the Camelot Theatres.

The Awards Buzz section is selected by Festival programmers as the strongest entries in this year’s Oscars® race and will screen 45 of the 92 official submissions in the Academy Awards® Best Foreign Language Film category.

A special jury of international film critics will review these films and present the FIPRESCI Award for Best Foreign Language Film of the Year, as well as Best Actor and Best Actress in this category at the end of the PSIFF.

Another great program is the Eyes on the Prize: Foreign Language Oscar Directors in Discussion.  This is a creative group of international filmmakers talking about filmmaking and world cinema.  The event is moderated by The Hollywood Reporter’s Awards Editor.   Monday, January 8, 4:30, Annenberg Theater.

If you are a reader and a movie buff, the BOOK TO SCREEN component is for you.  This is sure to be a fascinating event as authors and filmmakers talk about the challenges to bring a book to the big screen.  These discussions are moderated by industry pros and there is often time for questions and answers.

There are four adaptations and you can’t miss no matter which you choose to see.  (For more on the books and the event turn to CVW Book Review page 19)

How about DINNER AND A MOVIE?  “Constructing Albert” is a film about chef Albert Adria and is followed by dinner at Bonitá in Cathedral City on January 8.  The film begins at 4:00 at the Mary Pickford’s D’Place.

The Camelot Theatre, Wednesday, January 10, 4:30, features “The Cakemaker” about a pastry chef and is followed by dinner at Eight4Nine in Palm Springs.

Look for PSIFF PARTIES!  Tickets are required so ask at a Festival box office about availability.  There is a party nearly every night so check for time and dates.   The parties start with “Truth or Dare” at the Ace Hotel & Swim Club.  The party “Argentine Flight” will be held at the Palm Springs Air Museum and  “Telefilm Canada” will party at Lulu California Bistro.

“Gay!La” is back at the Toucan’s Tiki Lounge, the Spa Resort & Casino is hosting “Sound and Vision Party,” and the Hard Rock hosts “Rock’n Film Party.”

The festival CLOSING NIGHT screens “The Last Movie Star” on Sunday, January 14.  Burt Reynolds stars as an aging screen icon who gets lured into accepting an award at a rinky-dink film festival in Nashville, launching him on both a hilarious fish-out-of-water adventure and an unexpectedly poignant journey into his past.

BEST OF THE FEST is celebrated on Martin Luther King Jr. Day.  Tickets are available at the office.   The films are announced the night before.  Can’t go wrong seeing the films that were adored by the PSIFF fans.

PSIFF is one of — if not the finest — of Palm Springs’ events.  This Festival provides an opportunity to see films you may never have a chance to see again.  Grab a ticket, stand in line, see a movie, and enjoy the adventure!

Be sure to check all the dates, times and availability.  For tickets, schedules and more information go to www.psfilmfest.org or call 800-898-PALM.