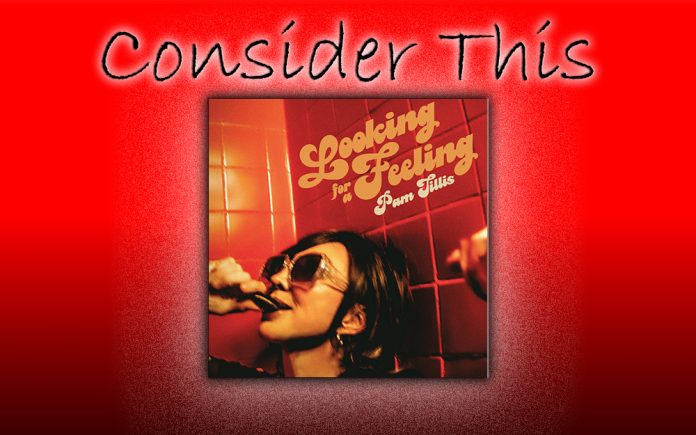 “Well, I was 17 when I joined my first band, 21 when I gave heartache my hand, looking for a feeling.”

That’s Pam Tillis, sharing a bit of her history on the title track of her new album. Despite the fact that she comes from Country music royalty (her dad was hitmaker Mel Tillis), and she has been making music for more than 40 years, she has never seemed like part of the Nashville establishment. Sure, she’s won a Grammy and a CMA award, and she’s hit #1 on Billboard’s Country chart. But she’s always followed her own muse, and made her own way.

A bit of a wild child, Pam was born in Florida in 1957, and grew up in Nashville, just as her father’s career was taking off. She began piano lessons at age eight and switched to guitar  at 12. By her teens, she was performing in talent shows. At 16, she was involved in a near-fatal car accident, and required extensive facial reconstructive surgery. Thankfully, she fully recovered, in time to enroll  at the University Of Tennessee. It was there she took her musical education to the next level, joining the Country/Rock Jug band, High Country Swing Band and forming a Folk duo with Ashley Cleveland.

Her musical ambitions quickly outstripped her thirst for higher education, so she quit school and got a job at her dad’s publishing company. One of her first songs, “The Other Side Of The Morning,” was recorded by Barbara Fairchild and reached #72 on the Country charts. Forming her own backing band, she relocated to California, specifically, the Bay Area. It was there the band became Freelight, their music was a sharp mix of Country, Jazz and Rock.

By the end of the ‘70s, she returned to Nashville, making ends meet as a single parent, she began singing back-up for her dad, fronting her own R&B band and continued honing her songwriting skills. Like many aspiring artists, she played regularly at the Bluebird Café, soon she signed with Warner Brothers. Her debut, “Above And Beyond The Doll Of Cutie,” arrived in 1983, the first single, “Goodbye Highway” landed on the Country charts.

She continued to release singles, concurrently, she was making a name for herself as a songwriter, with artists as disparate as Gloria Gaynor, Highway 101, Chaka Khan and Conway Twitty covering her songs. She had also

been bitten by the acting bug and performed in a Tennessee production of “Jesus Christ Superstar.” As the decade came to a close, she inked a deal with Arista Records.

Released in 1991, her  first album for Arista, Put Yourself In My Place proved to be a perfect introduction, (or re-introduction for those in the know). It spawned five hit singles and reached the Top 10 on Billboard’s Country chart. Her long-awaited breakthrough was richly deserved, and for the rest of the ‘90s, she could do no wrong. She quickly followed up with Homeward Looking Angel in 1992, co-produced 1994’s “Sweetheart’s Dance,” which netted her an ACM award for Female Vocalist Of The Year. Three singles reached the Top 5, and the song “Mi Vida Loca (My Crazy Life)” hit #1. The following year, she handled production chores herself on her fifth long-player, All Of This Love. Her 1998 album, Every Time reflected the dissolution of her seven year marriage to Nashville songwriter Bob DiPiero.

As the Arista label going through some personnel changes, her next effort, Thunder And Roses was delayed until 2001. In the meantime, Pam burnished her acting cred, appearing in television series like “Diagnosis Murder” and “Promised Land,” and more lastingly, on Broadway in the Lieber and Stoller musical, “Smokey Joe’s Café.” At the start of the 21st century, she ditched Arista for the more Roots-oriented label, Lucky Dog, an imprint from Epic/Sony Music. Her first effort was It’s All Relative: Tillis Sings Tillis. The 13-song set found her recalibrating her dad’s music, tailoring them to reflect strengths.

Of course, Nashville has made a habit of discarding older hitmakers, in favor of younger, slicker, (blander) models. It was another six years before Pam reappeared with Rhinestoned released through her own Steller Cat label. That same year, she also recorded a yuletide collection, Just In Time For Christmas.

Between 2012 and 2018 she appeared as herself on the ABC series, “Nashville.” During that time, she paired with Country contemporary Lorie Morgan for two well-received duo albums, Dos Divas and Come See Me And Come Lonely. Sadly, her dad Mel, passed away in late 2017. Now she has returned with her 11th solo album, Looking For A Feeling.

The album opens with the one-two punch of “Looking For A Feeling” and “Demolition Angel.” The title track locks into a swampy groove propelled by greasy electric guitar, slippery acoustic notes, slap-back bass, and a shuddery, stuttery beat. Pam takes a page from Bobbie Gentry’s playbook, and evokes a spooky, Southern Gothic vibe. Conversely, the lyrics recount the everyday ennui of being a grown-up; “There’s a man in a cubby hole dying to get rich, woman in a motel room with a seven year itch, looking for a feeling….now who can point a feeling, who can say what’s wrong, oh we all get high and low, turning over every stone, looking for a feeling.”

With “…Angel,” tumbling drums connect with rumbling acoustic arpegios, molasses thick dobro riffs, thumpy bass, sidewinding jaw-harp and vibrant organ colors. The lyrics chart a course of self-sabotage; “I got walls around my soul, walls around my heart, walls around these walls, I’ve built a prison in the dark.” On the break whiplash guitar riffs strike and retreat, recalling the Dixie Fried Blues Rock of Allman Brothers. Ultimately, Pam vows to shake her demons; “I will walk from this wreckage, cleansed of my sins, sweet devastation.”

In a record packed with excellent tracks, two songs immediately stand out. “Dark Turn Of Mind” and “Dolly 1969.” The former was written and recorded by Country/Folk darlings Gillian Welch and David Rawlings. In its original incarnation, it’s  a dour Dust Bowl ballad, brooding and dilatory. In Pam’s hands it’s recast as a Honky-Tonk ramble. Reverb drenched electric guitar, lonesome pedal steel, loping bass lines and keening fiddle are tethered to a galloping gait. Lyrics like “Take me and love me if you want me, but don’t ever treat me unkind/Cause I’ve had that trouble already, and it left me with a dark turn of mind,” read like a desperate plea. But Pam’s mien suggests this is less of a lovelorn request and more like a warning. The shimmery pedal steel on the break leans toward Hawaiiana buttressed by twangy guitars and swooping, staccato fiddle.

The latter blends fact and fiction, speculation and extrapolation, all of it sparked by an old pin-up of Dolly Parton. Here, Pam channels her inner Lou Reed, narrating the verses, singing only on the chorus. Spiraling guitars cascade over chunky percussion, wily bass and a wash of keys. Gazing at the photo, she’s transported to an earlier era; “I got this picture on my wall, of Dolly Parton standing by a Sedan Deville, and it looks to be in the sixties, cause it’s all chrome and fins, and she’s all blonde hair and curves and high heels/And spilling out of that Cadillac trunk, there’s guitars and drums and mandolins, and Dolly’s got one leg up on an old tweed suitcase, and she’s staring right into that camera lens, and every time I look at that picture I think, oh I wish I could go back, to be a stowaway in that long black Cadillac.” The arrangement accelerates as it rounds the curve of the chorus, shifting from a clackity rhythm to a propulsive beat. Stinging guitars spark and smoke on the break, locking into a Southern Boogie jam.

Pam has made a career of coloring outside the lines, and that approach  continues on several songs here. “Better Friends” is a Soulful ballad suffused in regret. Electric and acoustic guitars lattice over hushed keys and a shuffle rhythm. The lyrics offer a rueful post-mortem; “When You saw me angry, what you didn’t see was that I was afraid, I felt incomplete/Trying to make good in these humbling times can make you so weary, impatient, unkind.” Descending piano chords and agile pedal steel underscore her contrition.

With a few deftly turned phrases, “Lady Music” offers a cinematic take on a story as old as time. Finger-picked guitar collides with flange-y electric riffs, piquant mandolin, tensile bass, plaintive piano and a loose-limbed beat. The opening verse sets the stage; “She pulled him right off of that row he was hoeing, and picked him like weeds from a field, she reached out and touched him through that AM radio, seduced him with fiddles and steels/She found him fresh off that ’59 Greyhound, introduced him to all of his friends, all the poets and dreamers and drunks that she ran with, with open arms they welcomed him in.” This could easily be Willie’s story, or Waylon’s, Marty’s or Kenny’s. The verisimilitude matches Tom Petty’s “Into The Great White Open,” and the arrangement and instrumentation hews more closely to Rock than Country.

Then there’s the Blues-inflected “Scheme Of Things.” Anchored by fluid, Hendrix-ian guitar riffs, supple organ notes, stately piano and a rock solid beat, the lyrics manage to reassure an unfaithful partner that this too, shall pass. “Only one good thing about goodbye, there’s nothing more to say, heaven knows what kind of lies you’d tell if you thought you’d have to stay/So I swear that I’m not hurting, leave the lying up to me, tell me what’s a little foolish pride in the scheme of things.” Weepy pedal steel washes over the break.

Finally, “Karma” is a stompy smorgasbord that is equal parts Torch, Twang, Western Swing, Girl Group grit and Rock & Roll. Twisty synths tangle with prickly guitars, vroomy keys, rubbery bass lines, feathery pedal steel and a brawny beat. Pam slips into the skin of a faithless heartbreaker who has finally met her match; “I feel the pain of everyone I’ve made blue, a strange reverse déjà vu, every action has a kind of consequence, the universe sent me you…You’re my karma, aren’t ya? I used to be the heartbreaker, now I’m the breakee/What goes around comes around, nobody’s free from karma, you’re my karma.” If this song had been released in 1977, it could achieved the same crossover appeal as Dolly’s “Here You Come Again.”

Other interesting tracks include the bittersweet sorrow of “Last Summer’s Wine” and the intergalactic grace of “Burning Star.” On “My Kind Of Medicine” lyrics seem to take a swipe at organized religion; “Cause there’s people out there peddling all kinds of counterfeit hope, don’t get me wrong now, I’m not meddling, but if you ask me how I cope/I watch the same old movies that always made me laugh, and I throw that stick a hundred times, watch my dog bring it back, and I saddle up the horses get lost for hours on a Sunday ride, works every time, my kind of medicine.”

“Looking For A Feeling” closes with an instrumental reprise of “Better Friends.” Gossamer piano chords weave through a tapestry of sparkly guitar, shaded pedal steel and a leap-frog beat. Spacious and succinct, it provides a Jazzy coda to a luminous record.

Not too many musicians could go 13 years between albums, but Pam Tillis has always marched to the beat of a different drummer. Looking For A Feeling defies expectations and, as always, blurs the lines. It was well worth the wait.