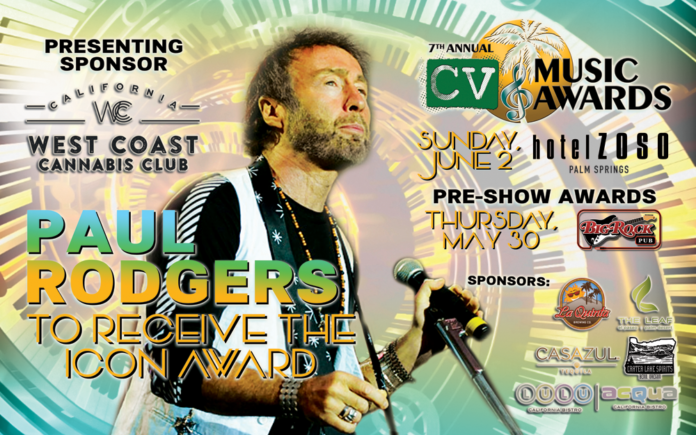 Paul Rodgers is known as the singer-songwriter and frontman, having formed the bands Bad Company, Free and The Firm, along with having a successful Grammy nominated solo career. He also resurrected the band Queen and reintroduced them into touring and recording after a 14 year absence after Freddie Mercury passed. He is also known for having one of the best voices in rock music. He is a living legend and now a CV Music Award ICON recipient. Rodgers will be present on Sunday, June 2 to accept this award at the 7th Annual CV Music Awards at Hotel Zoso.

Bad Company has had a successful career that began in 1974 when they released their self-titled album that went 5 times platinum and spawned hits like “Can’t Get Enough,” “Ready For Love,” “Rock Steady” and “Movin’ On.” That album was followed by Straight Shooter, that went triple platinum and produced the hits “Feel Like Makin’ Love,” which was a Top 10 hit and Grammy nominated, and “Shooting Star.” Run With the Pack followed in 1976 and was the band’s third consecutive platinum selling album and then in 1979 came Desolation Angels, which produced the classic hit “Rock & Roll Fantasy.”

Rodgers most recently released a CD/DVD titled Free Spirit, which celebrates his music with Free and was recorded live at London’s Royal Albert Hall on California based record label Quarto Valley Records Icons Label, which hit #2 on the Billboard chart for 3 weeks. Label President Bruce Quarto, created the Icon label, with Rodgers being the first icon on it. 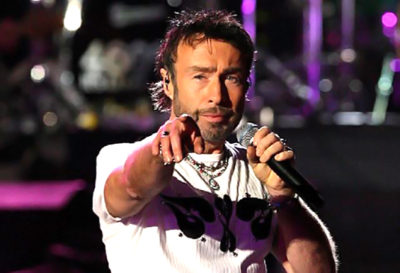 This is my fourth interview with Rodgers and he is one of my favorite people to interview. I have also been a huge fan of his since I was a teenager in the 70s. He was gracious enough to take time from his busy schedule to chat with me again. He just returned from doing a few gigs with ZZ Top in Dallas, Houston and Austin, Texas and from there he went to Phoenix where his son Steven Rodgers opened for him.

“It was great hearing Steve. He very much connects with the audience. He has a real spirituality about him. He has fantastic songs,” shared Rodgers.

I asked Paul about his touring schedule, playing with ZZ Top and how he keeps it fresh out on the road every night.

“It’s so lovely to get the response we still get today,” he shared. “Every night is different. We’re not actually touring we’re playing a select number of shows each year. We’ve been trying to pull back for years now so we can try to have more of a home life. We couldn’t resist this offer to play a few dates with ZZ Top. Touring is when you pack your bags for 3 to 6 months and you don’t come home. What we do is go out for a few shows, return home and repeat as often as we like. It’s more sane that way.”

“We would love to sit back a little bit more. We only select about 20 to 30 shows a year now, which doesn’t seem like a lot but there’s still a lot of planning involved. We have a crew of about 15 people plus the band. We love the music and the music drives us.”

“How I keep it fresh is I think ‘how do I present what we do with the maximum impact on the audience.’ We’ve got a lot of material to choose from so I’ll look at the songs and think ‘what should we open with tonight that we haven’t done before.’ I often come back to “Can’t Get Enough” because I think people connect with that song right away. “Live For the Music,” is another great song to perform because it still rings true today; we really are still living for the music. Every show is fresh for us because it’s always a new audience with new energy that we get to play in front of. Also, recently, Simon (Kirke) has a new acoustic song he’s doing. So he’s stepping out from behind the kit to perform it.”

Paul has so many fun and interesting stories from his musical career so I asked him to share a few with me. 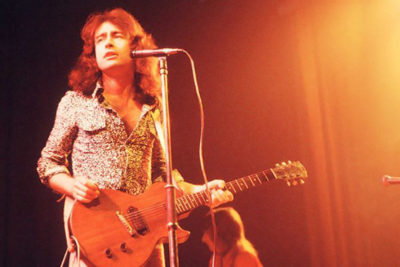 “When I first left my home in England at 16, within a year I was playing at the Isle of White with Free in front of 250,000 people. All these years later, I’m still absorbing what happened. It was an other-worldy experience. I remember flying over in a helicopter and looking down, it was like a gathering of the clans with all the colors, camp fires and people dancing. It was an amazing vibration. It was England’s Woodstock. Another highlight was playing the Houston Astrodome with ZZ Top back in 2006, where we played in front of 67,000 people. We had just been signed to Swan Song and Peter Grant came to the show and he brought Jimmy Page and he got for a jam with us and we did “Crossroads.” And the place erupted after that.

“Another highlight was with Queen at Freedom Square in Kharkov Ukraine, which had an attendance of 350,000. Apparently the Square is visible from the moon. It was an AIDS awareness event and there were all of these strange shaped giant balloons floating around and I caught one and it was a giant condom,” Rodgers shared laughing. “The square was right across the street from what was the old KGB building. It was very ironic being a rock band playing in front of it and when we played we were looking right at it.”

I shared with Paul how excited the nominees are to be performing the 5 song tribute for him at the show; that they are true fans and feel like they got the golden ticket.

“That’s so fantastic. I’m really touched. The way that CV Weekly embraces and celebrates local talent is fantastic, inspiring, and you’re changing lives for the better. My heroes were Otis Redding, Wilson Pickett and Booker T. The music I cut my teeth on I still get a thrill hearing today.  I remember when BB King opened his club up in NY, I was invited to his show and a few people got up and played with him like Dr. John and I jammed with them and was honored to be there, but I was shaking at the knees because I’d been listening to him since I was a schoolkid and I couldn’t believe I was on stage with him. It was such a great moment. Then the time I got to sing with Sam Moore of Sam and Dave and we were both standing at the microphone and he started to sing and I was just suddenly a school kid again in little shorts and I was so nervous. He really is a lovely man and has become a close friend,” said Rodgers, remembering those moments fondly and with laughter.

He shared that receiving the ICON Award is a great honor to him. 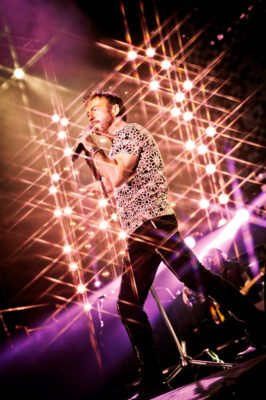 “It’s like an affirmation that we’re welcome here in Palm Springs. When we first came here our friends Karen & Tim said ‘you should come to PS’ and we thought ‘well, it’s not very close to the ocean,’ but we came and we just loved it. All the neighbors are very supportive here and very connected and neighborly. I’m very much a private person and I just enjoy going about the business of making music so accolades and awards aren’t really why I do it, but this award is very special because I know it’s being given with a lot of love and respect and I love you back. It will be a night to remember.”

Paul and his lovely wife Cynthia have lived in Palm Springs for about 4 years now.

“We also spend time at our home in BC. We have a home that overlooks the Okanagan Lake and in the summer we like to spend our time in it, on it, and under it…skiing, swimming, kayaking, but it gets so cold in the winter so we come down here and love it here,” Rodgers shared.

Rodgers says that Cynthia is a big help out on the road and handles most of his business.

“She’s got a great brain and great fashion sense plus she’s a really hard worker.  She can slug it out on the road like the boys do. It is grueling. Having to get up early and pack to get on the plane and go through security after you’ve been up late doing a show the night before. So she helps me so much. Business wise she’s absolutely brilliant. And not only does she do all of that, but she looks after every animal you ever see. We can’t go to Dubai and pass a camel that’s being mistreated without her wanting to get out and get involved and attempt to take the animal home. I’m just kidding of course, you can’t take a camel on the plane,” he said laughing. But seriously, if you knew Cynthia it’s not far from the truth. They both are true champions for the animals. They have even committed to giving $5.00 for every ticket sold to the CV Music Award to be divided between 3 local animal charities: Loving All Animals, Living Free Animal Sanctuary and CV Horse Rescue.

Rodgers is also going to be part of the Rock Legends Cruise on Feb 27 of 2020 in Fort Lauderdale, Florida.

“The cruises are very nice actually. You get to hang out with all the other bands and you’re kind of locked in together and it’s a lovely vibe. There’s nowhere else to go except up on board.  Much of the time when you’re out on the road with bands, you’re like 2 ships passing in the night and you don’t get to spend much time together. On the cruise ship it’s a lot more personal and you have time to have dinner together and get to know each other better.”

He said that he is always working on new music but for now he’s keeping it under wraps.

“I’m always working on new material it’s part of what I like to do. I can’t give too much away, but I think we’re going into the studio again soon, but I’m not supposed to say too much about that. I’m writing a lot of songs let’s just leave it at that.”

Back in 1969, when he was only 18 years old, Rodgers performed with his band Free at Madison Square Garden. Since then he has built an incredible career for himself.

“I started out as a teen full of angst in Middlesboro, England and I have a lot to thank music for, it gave me and still gives me focus and it kept me from running the streets. And did I think that 50 plus years later that I would still be performing? No, it still surprises me! The fans have kept the music alive. We have an incredible fan base. When we step on that stage the magic happens and we know why we still do it.”