Percussion: Musical instruments such as drums, cymbals, or xylophones, that you play by hitting or shaking. I never realized just how important they are in creating a full sound until I saw a video by Steve Oliver where he performed and played guitar with simply a percussionist. It was all that was needed.

The Celebrity Jam Fest will have a total of 5 percussionists that will be performing at the Jam on Wednesday, Oct. 5 at Woodhaven Country Club. Mark Gagliano was recommended by Rick Parma and we are happy to have him on board. Located in Orange County, Mark is an Italian who was born and raised in Pico Rivera, CA. His exposure to Latin music moved him in the direction of percussion. His true passion is when we plays the congas or timbales. 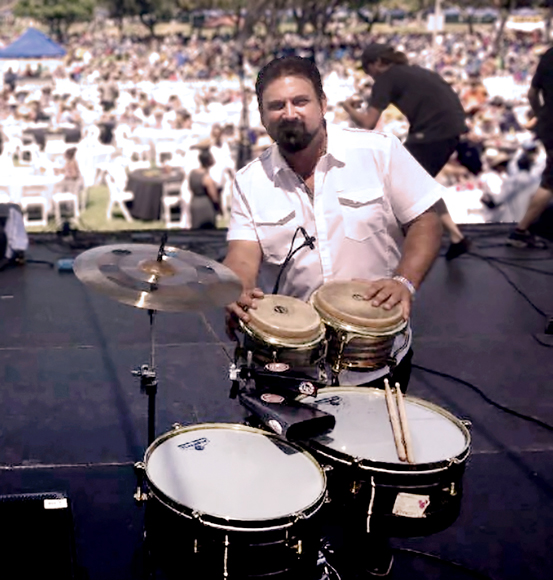 Mark said he’s been playing drums his entire life. He started out by playing drums for his church. He performed gospel music in various churches in the LA area. Fifteen years ago he switched to percussion. His focus is on the congas and timbales, but brings a full range of percussion instruments with him. This has opened many doors for him to perform with some of the top artists including Louis Cruz Beltran, Pete Escovedo (of the famous Escovedo), Evelyn Champagne King, Barbara Morrison, Cassie Abrams (American Idol), and even Palm Desert favorite, Michael D’Angelo (who also happens to be his Uncle).

Mark will be joined by some legendary percussionists at Celebrity Jam Fest including Bob Desena, La Jazz Artist of the Year (2014) on vibes, Paris Escovedo and his daughter Melody of the famous Escovedo percussionists, will be performing and our own drummer Craig Chesnut will round out a particularly stunning array of musicians. A total of 20 National artists and local favorites will be jamming for 3 straight hours. Dancing is also on the menu.

Jazz, blues, funk, groove, flamenco and Latin will all be featured in this mix of musicians and vocalists that will rock your socks off. There will be a total of 9 different vocalists performing songs that are both favorites and originals. Vocalists, Rose Mallett, Keisha D, Cleer, Peggie Perkins, JC Bentley, Cat Lyn Day, and Shirley Evaro (vocalist for Sergio Villegas) will all be performing.

They will be backed by the best of the best core band including Joe Baldino on guitar, Hans Zermuehlen from LA, on keys, Andrew Ford, who tours with some of the biggest names including Chaka Khan, and Slim Man (CV Music Awards, Jazz Vocalist of the Year).

The headliner is Adam Hawley who’s first single “35th Street” went straight to #1 on Billboard and stayed there for 5 weeks. He toured with Manhattan Transfer, then Jennifer Lopez took him on tour. He’s been playing with Dave Koz opening for Barry Manilow for the last 2 years.

VIP Guests can attend the ‘Artist’s Appreciation Party’ from 5-6 with wine, liquor and food tastings. The jam begins at 6 and goes for 3 straight hours until 9 pm.

Professional sound and lighting by Live Audio, Willie Robinson (who did sound for Tower of Power for 10 years) will give this jam an unprecedented talent and performance level unseen in the desert.

Tickets are available beginning at $30 for general Admission. The VIP tickets are assigned table seating (European style) tickets are $60 and include 2 hours of wine, liquor and food tastings and a one hour Artists reception. To purchase tickets call Purplepass at 1-800-316-8559 option 4 or go online and pick your seats at http://www.purplepass.com/celebrityjamfest.