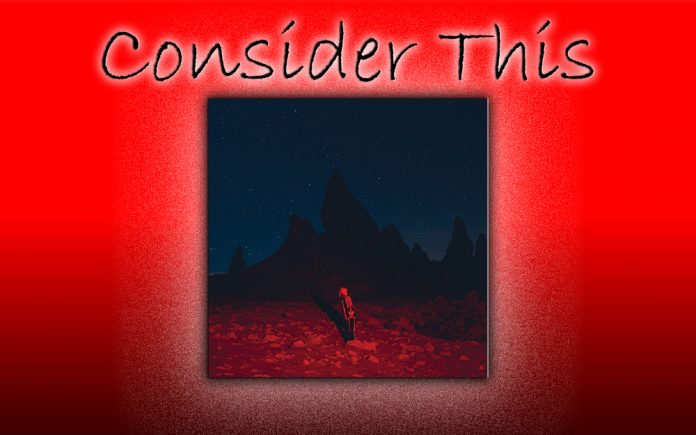 “When the speed kicks in, I go to the store for nothing, and walk right by the house where you lived with Snow White/I wonder if she ever thought the storybook tiles on the roof were too much, but from the window it’s not a bad show, if you’re favorite thing’s Dianetics or stucco..”

That’s Phoebe Bridgers trafficking in a bit of trademark snark on the title track of her new album. The inherent appeal of this young artist, is that her music effortlessly swivels between wry observations and intensely intimate revelations.

Born in Los Angeles in 1994, Phoebe grew up in Pasadena. Even as a little kid, she was obsessed with music. Her parents’ record collection included plenty of Classic Rock, Bluegrass and Country. While piano lessons felt like a chore, she became pretty proficient on guitar, and the first song she mastered was Hank Williams Sr.’s “Lovesick Blues.”

Before she finished  high school, Phoebe was already booking solo shows around town. Prolific alt.country artist Ryan Adams became a fan. The night after he saw her perform he invited her to record some songs in his studio. (It later came to light that his interest was less musical and more prurient. In 2019, several women, including Adams’ ex-wife Mandy Moore, alleged that he offered support with the expectation of some sexual quid pro quo.) Adams released Phoebe’s three song EP, Killer via his Pax Am imprint.

The EP created some buzz and the gigs got bigger and better. Soon, she was opening for artists she really admired like Julien Baker, the Violent Femmes and Conor Oberst. Not long after, she signed with the Dead Oceans label, and connected with producers Tony Berg and Ethan Grushka. By late 2017 she released her first, official long-player, Stranger In The Alps.

Instead of concentrating on a follow-up, she hooked up with fellow singer-songwriters Lucy Dacus and Julien Baker and formed boygenius. The trio of songbirds wrote and recorded a self-titled EP in just four days.

2019 found Phoebe taking another detour when she began collaborating with Conor on their side project, Better Oblivion Community Center. The self-titled, 10 song set took the music industry by surprise. Their vocal blend was less Johnny & June, and closer to the Folky harmonies of Simon & Garfunkel, with a dash of emo and Country Rock.

Between 2018 and 2019, Phoebe recorded her second effort, Punisher. It was supposed to be released later this summer, while she was on tour, opening for The 1975. But COVID 19 put the kibosh on those plans, so now it is out, well ahead of schedule.

The album opens tentatively with the dour instrumental, “DVD Menu.” Ominous guitar chords partner with shapeshifter violin before folding into the slightly sunnier “Garden Song.” Quavery acoustic notes lap over serpentine electric riffs, wily bass lines and a thumpy beat. Phoebe’s voice is suitably spectral as she revisits childhood haunts and checks in with a friend. She sifts through a panoply of emotions rather efficiently, revealing little nuggets of truth along the way; “And when I grow up, I’m going to look up from my phone and see my life, and it’s going to be like my recurring dream/I’m at the movies, I don’t remember what I’m seeing, the screen turns into a tidal wave, then it’s a dorm room, like a hedge maze, and when I find you you touch my leg and I insist, but I wake up before we do it.”

Both “Halloween” and “Kyoto” match vividly personal experiences with irresistible melodies and instrumentation. The former began life as an ode to her favorite holiday. Meandering guitar chords partner with vroom-y synths and minimal percussion. The opening couplets land the listener in the middle of an intimate exchange; “I hate living by the hospital, the sirens go all night, I used to joke that if they woke you up, somebody better be dying/Sick of the questions they keep asking you, they can make you live in the past, but I can count on you to tell me the truth, when you’ve been drinking and wearing a mask.”

She relents on the sweet, cajoling chorus; “Baby, it’s Halloween, and we can be anything, come on, man, we can be anything.” Even as the tempo becomes more insistent, plaintive keys thread between verses, and quietly verses underscore her Conor Oberst lazily trails her vocals on the final chorus as swiveling guitars and plinky-plunky keys fade to black.

The latter is a little more upbeat, a blend of floofy synths, jangly guitars, thrumming bass and a chugging backbeat. Shrugging off the ennui of touring the Far East, Phoebe can’t seem to make herself explore the culture of this ancient, Japanese city. The lyrics offer a catalog of ephemeral activity before slipping in a few revelations; “Day off in Kyoto, got bored at the temple, looked around at the 7-11, the band took the speed train, went to the arcade, I wanted to but I didn’t/You called me from a pay phone, they still got pay phones, it cost a dollar a minute to tell me you’re sober and you wrote me a letter but I don’t have to read it.”

Her voice soars on the chorus, suffused with yearning, disdain, and bookended by a peppery horn section. Then locations shift and it’s back to the City Of Angels. It’s tempting to infer the final chorus is aimed at a certain #metoo-y alt.country predator, but she’s supposedly addressing her dad; “I don’t forgive you, but please don’t hold me to it, born under Scorpio skies, I wanted to see the world through your eyes until it happened, then I changed my mind.”

The album’s best tracks find Phoebe stepping out of her comfort zone and expanding her musical horizons. Take “Graceland Too,” the winsome melody and instrumentation bear down on her childhood love of Bluegrass. On this back-porch ballad, bent banjo notes brush up against arch fiddle runs and plucky guitars. Veering between first and third-person angst, Phoebe creates a stark narrative that mines the richly relatable Southern Gothic vein pioneered by writers like Eudora Welty, Carson McCullers and Flannery O’Connor.

Only she gives it a 21st century twist; following a successful mental health check, the song’s protagonist hits the road; “So she picks a direction, it’s 90 in Memphis, turns up the music so thoughts don’t intrude, predictably, winds up thinking of Elvis, and wonders if he believed songs could come true, I’m asking for it if they do.” Joined by her boygenius cohorts, Lucy and Julien, their heartbreaking harmonies dovetail on the chorus.

The theme of living outside your life, first explored “Kyoto” is revisited on “Chinese Satellite.” Braided guitars and ambient noise envelope Phoebe’s fragile confession; “I’ve been running around in circles, pretending to be myself…” The song quickly gathers speed layering angular guitars, tensile bass, and strings that saw and swoop, to a clattering beat. Unable to wish on a star, she pins her hopes on a Chinese Satellite instead, insisting “I want to believe, instead I look to the sky and feel nothing, you know I hate to be alone, I want to be wrong.” Stacked vocals and dissonant guitars end the song on a fragmented note.

“Moon Song” begins up close and personal, fingers on frets accompany breathless vocals, but suddenly, the arrangement opens up, leaning into a Waltz-y reverie. Over shimmery keys and a kick-drum beat, she sifts through the ashes of a dying relationship; “You couldn’t have, you couldn’t have stuck your tongue down the throat of somebody who loves you more?/I will wait for the next time you want me, like a dog with a bird at your door.” Delicate and devastating, by the final verse it feels as though she’s finished with this wrecked romance; “You are sick and you’re married, and you might be dying, but you’re holding me like water in your hands/When you saw the dead little bird, you started crying, but you know the killer doesn’t understand.”

Finally, “Savior Complex” cycles through a plethora of emotions as the instrumentation and arrangement follow suit. Initially dirge-like and intimate, it slowly opens into a languid dreamscape as jangly guitars give way to stuttery synths. Things become positively Beatlesque as searing strings and hollowed-out keys are folded into the mix. Fragile and woozy on the break, this gauzy soundscape can’t completely camouflage the need to revisit old psychic wounds; “Baby, you’re a vampire, you want blood and I promised/I’m a bad liar with a savior complex, all the skeletons you hide, show me yours, and I’ll show you mine…”

Other interesting tracks include the aforementioned title track, which is swirly and hypnotic in all the right ways. Then there’s “ICU (I See You),” which offers this poignant confession; “I’ve been playing dead my whole life, and I get this feeling whenever I feel good, it’ll be the last time.”

The album closes with the restless tour travelogue of “I Know The End.” This was the first song she started for the record and the last one she completed. Brittle guitars jitter and buzz like live wires on a downed power-line, as keys sidle and ache over roiling bass and a tick-tock beat. The opening verse effortlessly sets the scene; “Somewhere in Germany, but I can’t place it, man, I hate this part of Texas, close my eyes and fantasize, three clicks I’m home/When I get back I’ll lay around and I’ll get up and lay back down, romanticize the quiet life, there’s no place like my room.”

Homeric in scope, it offers snapshots of the road; “Went looking for a creation myth, ended up with a pair of cracked lips, windows down, scream along to some ‘America First’ Rap-Country song/A slaughterhouse an outlet mall, slot machines, fear of God.” On the break, the arrangement accelerates locking into a majestic cacophony, adding yowling Mariachi horns and a raucous chorus of backing vocals. The final verse is equal parts reassuring and disconcerting; “Either way, we’re not alone, I’ll find a new place to be from, a haunted house with a picket fence to float around and ghost my friends/No, I’m not afraid to disappear, the billboard said the end is near, I turned around and there was nothing there…Yeah, I guess the end is near.” That last refrain is repeated as the instrumentation spirals, lurches and shudders. A war cry, Morricone-flavored horns and skronky guitar wind it down, and the listener is left with heavy breathing and whispery, wordless vocals. A fractious end to a great record.

Whether she’s juxtaposing her antipathy for Eric Clapton with her affection for John Lennon, or baring her soul, Phoebe Bridgers’ music is an intensely personal roller coaster ride. She has deftly sidestepped the dreaded sophomore slump that typically accompanies second albums. Punisher displays artistic growth without sacrificing her signature sound.