The general consensus is 2016 has been a remarkably shitty year.  The music community has weathered a lot of untimely (and sometimes shocking) deaths. Lemmy, David Bowie, Glenn Frey, Phife Dawg from A Tribe Called Quest and Prince at the beginning of the year; more recently, Ska legend Prince Buster, Scotty Moore (Elvis Presley’s guitarist), Leonard Cohen and Leon Russell, and now Sharon Jones, (goddamnit). Sometimes, it’s felt as though it’s almost too much to bear. But here’s some good news: the Pretenders have a new record out.

Fronted by trailblazing Renaissance woman Chrissie Hynde, the four-piece burst on the scene in 1979.  Their debut was a revelation. Spiky, yet melodic, their music was a heady brew of Punk and British Invasion sounds.  Nearing 30 when she achieved international stardom, it seemed as though she had already had nine lives.

Born in 1951, Chrissie grew up in Akron, Ohio her attraction to Rock N’ Roll was almost instantaneous. She abstained from the usual teen rituals of dating, boyfriends and proms.  Fascinated by bands like the Rolling Stones, Kinks, Iggy & The Stooges and Yardbirds, no hometown lotahrios could live up to their Bad Boy promises.  She preferred to live vicariously through their exploits.

She attended Kent State and was actually on campus for the infamous 1970 shootings. One of her first bands included future Devo visionary, Mark Mothersbaugh.  An avowed Anglo-phile, Chrissie saved her money so she could move to London England.

She finally arrived in 1973. Not only did she end up writing for New Musical Express (NME), she also worked briefly at SEX, Vivienne West and Malcolm McLaren’s outre’ clothing shop that became ground zero for the explosion of Punk Rock. Pretty soon she was collaborating in nascent bands with future Punk progenitors like Tony James (Generation X) and Mick Jones (The Clash).

Finally in 1978, she acquired a manager and recorded a demo. More importantly, she connected with drummer Martin Chambers, bassist Pete Farndon and sui generis guitarist James Honeyman-Scott. They became the Pretenders, drawing inspiration from the classic Platters song, “The Great Pretender.” Their debut arrived at the end of 1979, buoyed by three killer  singles, “Stop Your Sobbing,” “Brass In Pocket” and “The Wait,” it was an instant classic.

Chrissie Hynde had flipped the script for women in Rock N Roll, she wasn’t a shambolic Blues belter like Janis Joplin, she wasn’t a Punk/Poet androgyne like Patti Smith, nor was she swathed in patchouli and crushed velvet, singing of gypsies, wood nymphs and wiccans like Stevie Nicks. Swaggering like Jagger in her (faux) leather pants, she exhibited a charisma that paralleled Doors’ front man, Jim Morrison.

Seeing herself as one of the gang, or part of a pack, Chrissie eschewed claims that she was waving some feminist flag. She was tough, a brittle biker chick one minute (“I shot my mouth off and you showed me what that hole was for”). But in the next minute, she wasn’t afraid to appear tender and vulnerable, (“we are all of us in the gutter, but some of us are looking at the stars”), that last bit appropriated from renowned proto-Punk Oscar Wilde.

Two years after their debut, the Pretenders released an EP in the Spring of 1981 and a full-length follow up, Pretenders II, that August.  Pete Farndon’s addiction to heroin became his primary focus and he was ousted from the band in June 1982. Two days later James Honeyman-Scott died of heart failure as a result of cocaine intolerance. Gutted, she and Martin Chambers took a much needed break. (A year later, Pete Farndon was found in his bathtub, dead from a heroin overdose).

At this point, Chrissie was pregnant with (Kinks leader) Ray Davies child. By late 1983 she and Martin recruited guitarist Robbie McIntosh and drummer Malcolm Foster and roared back with the surprisingly self-assured Learning To Crawl album.  Following her marriage to Simple Minds front-man Jim Kerr and the birth of her second daughter, she was ready to return to the Pretenders, but by this time she and Martin Chambers had parted ways.

Starting in 1986, Chrissie was the only original member in the Pretenders. Martin Chambers would come and go for different albums and tours, but over the course of  the next 22 years and six more studio albums,  Get Close, Packed, Last Of The Independents, Viva El Amor, Loose Screw and Break Up The Concrete, it was basically the Chrissie Hynde Experience.

Apparently, the band went on hiatus after Break Up The Concrete. In 2010, Chrissie began collaborating with the Welsh singer JP Jones and his band The Fairground Boys. Her relationship with JP was a little more than professional, but it only yielded one album, Fidelity!,  released under the unwieldy appellation  of JP, Chrissie And The Fairground Boys.”

Four years later, the time seemed right for Chrissie to record her first official solo album, Stockholm.  As the title implies, it was recorded in Sweden, some tracks were co-written by producer Bjorn Yttling, (from the whistle-y Indie-Pop band, Peter, Bjorn & John).  Relying on her patented tough yet tender style, the album was a modest hit.

In 2015 she wrote the book Reckless, an occasionally controversial memoir that recounted her nomadic years in America and abroad, her participation in England’s burgeoning Punk scene and her first couple of years in the Pretenders. Not long after she finished the book, she connected with Black Keys front-man (and Akron native) Dan Auerbach.

As half the Black Keys, Dan has skyrocketed to success with a series of albums that have incorporated Blues, Rock and even hints of Prog and Psychedelia. In his downtime he has produced albums for artists like Dr. John, Hanni El Khatib and Ray Lamontagne. He also recorded a solo album and formed a second band, ARCS who released their debut, Yours Dreamily, last year. 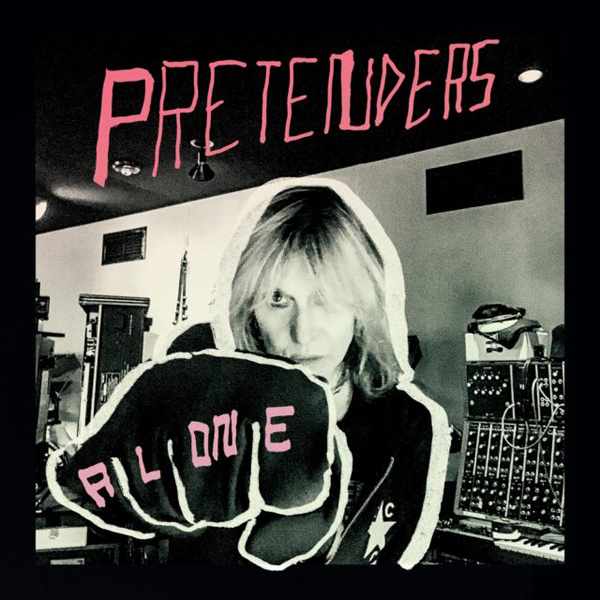 When he and Chrissie began collaborating he enlisted fellow ARCs   guitarist Kenny Vaughan, drummer Richard Swift and Leon Michaels on keys.  As the sessions evolved, she determined it was more of a band effort and decided to resurrect the Pretenders moniker. The result is their 10th studio album, Alone.

Opening with snatches of ambient studio chatter, the record kicks into gear with the title track. Growling guitar gives way to serpentine bass, flowery keys and a rock steady beat. Over stuttery power chords Chrissie launches into a soliloquy highlighting the singular pleasures of being alone; “Now I’m out prowling the streets, with the poets and the Greeks and the deadbeats, I’m taking my time sitting on park benches/And all the glamour it all starts down here, this is where the trends begin, Life’s a canvas and I’m on it.”

Arch, and somewhat   tongue-in-cheek, Chrissie breaks down the  rules of the road for this  particular long-distance romance; “What happens on the bus stays on the bus, it don’t mean nothing or require a fuss/A vow of silence is the code that keeps the backline on the road, whatever happens, happens-has to be, but don’t rely on domesticity.”

“Let’s Get Lost” is a languid charmer, anchored by a hip-switch rhythm and willowy guitar riffs that breeze through the melody’s echo and sway. Here Chrissie tries to keep it light, but she’s clearly emotionally invested; “Well, I wear it like a charm, a tattoo on my arm, your name in a horseshoe Talismans and such, I rely on them to touch and get close to you.”

“Blue Eyed Sky” begins tentatively with spidery acoustic arpeggios that interlace with wind chimes, organ colors and a propulsive beat. Front and center are Chrissie’s subtle and sultry contralto vocals. Her performance is rich and nuanced, her voice (nearly 40 years on) continues to bewitch and beguile. The lyrics briefly touch on her longstanding devotion to  Vaishnavism, (a branch of Hinduism),  when she offers this compliment: “No one understands me, like my baby, no one understands like that man/Jiva spirits never die, in his blue-eyed sky.”

Finally, the pocket lullaby of “The Man You Are” is powered by sonar-ping percussion, shadowy guitar and twitchy bass lines. Lyrics like “I don’t expect sobriety, I don’t expect stealth, I don’t expect you’ll ever be a man defined by your wealth,” walk a fine line between acceptance and diminished expectations.

The album’s best tracks are “Gotta Wait” and “I Hate Myself.”  The former nicks its urgent rhythm from the old Pretenders’ classic, “Mystery Achievement.”  Chrissie advocates patience, but the tensile melody and arrangement tell a different story. From the stompy beat, prowling bass fills, mad scientist keys and strafing guitar riffs that snarl and strut. Sure, everything in life requires waiting, unless Chrissie Hynde is in line.

Other interesting tracks include the slinky pulse of “Never Be Together,” the icky thump of “Chord Lord” and the Tiki-Twang of “One More Day,” which features the reverb-drenched tone of Surf-Guitar King Duane Eddy. The album closes with a tender version of Marek Rymaszewki’s Baroque ballad, “Death Is Not Enough.”  Lush and ornate, the arrangement is propelled by honeyed acoustic guitar, pedal steel, roiling stand-up bass, fluttery keys; a mordant finish to a solid record.

Alone is a nice addition to the Pretenders canon. Still, it could just as easily have been Chrissie Hynde’s second solo effort. Back in 2005 when the Pretenders (basically Chrissie and Martin Chambers) were inducted into the Rock N Roll Hall Of Fame she summed up the logic behind her choice to remain a Pretender. “I know that the Pretenders have looked like a tribute band for the last 20 years…and we’re paying tribute to James Honeyman-Scott and Pete Farndon, without whom we wouldn’t be here.  And on the other hand, without us, they might have been here, but that’s the way it works in Rock N Roll.”

At 65, Chrissie Hynde remains prickly and somewhat obdurate. A life-long vegan, eco-warrior and committed P.E.T.A. activist, she feels more comfortable collaborating and creating as part of a pack.  Either way, it’s great to have her back.