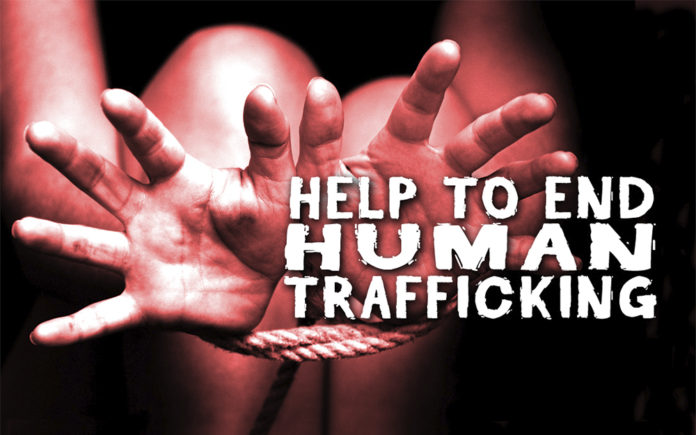 Human trafficking is almost everywhere, and is most prominently found in resort communities with high-profile events.  Sound familiar?

The CV is a world-class destination with its music, art and film festivals, tennis and golf tournaments, White Party and Gay Pride Parade, to name a few of the many popular regional events.

Tourism is the valley’s number one industry, and in an area that caters to a wide variety of visitors, according to experts, there are indeed human traffickers here at work.

Like it or not, aware of it or not, the CV is a hotbed for both forms of human trafficking.

Victims of sex and labor trafficking are made up of US citizens, foreign nationals, women, men, children and LGBTQ.  Human traffickers prey on all ethnicities and socio-economic backgrounds.

All trafficking victims have lost their personal freedom and are trapped in dangerous situations.

The National Center for Missing and Exploited Children estimates one out of six endangered runaways are likely child sex trafficking victims.

Although there are no “official” human trafficking figures calculated for the United States, according to the anti-human trafficking organization Polaris, victims in this country number into the hundreds of thousands and are comprised of adults and minors in both sex and labor trafficking.

With a continued increase of sex and labor trafficked victims in Riverside County, the Sheriff’s Department formed the Riverside County Anti-Human Trafficking Task Force (RCAHT) in 2010.

RCAHT is a multi-agency partnership that addresses the crime of human trafficking and assists victims through community organizations like Shelter From the Storm.

Serving the Coachella Valley, RCAHT collaborates with local law enforcement, the FBI, the US Attorney’s Office, the District Attorney’s Office and Operation SafeHouse.  The task force works closely with Million Kids and other outreach programs.

RCAHT’s goal is to coordinate services tailored to the characteristics and circumstances of victims, train law enforcement on investigation and detection, and educate the public while creating awareness to protect people from abuse and exploitation.

Rangel has been with the County’s Division of Victim Services for over 12 years. For the last 3 years, she has served as the Human Trafficking Advocate in the Eastern Region of the County.

Rangle partners with Riverside Family Justice Center (FJC) and collaborates with the Riverside County Anti-Human Trafficking Task Force.  They get involved when the police are called and a crime is reported.  Rangle admits that collecting evidence and prosecuting human traffickers is a challenge and convictions are very few.

But, Rangel is optimistic that through wider collaboration, progress is being made to assist victims through the legal process to bring more human traffickers to justice.

Cardenas has been with the Riverside District Attorney’s Office since 2005.  She has worked as an advocate in homicides, sexual assaults, child abuse and human trafficking cases in the Western Region of the County for 3 years.  Cardenas is now a Supervisor in the Eastern Region of the Division of Victim Services in Indio.

Rangel and Cardenas explained that Family Justice Center advocates are able to directly assist with a myriad of services that include, help with restraining and protective orders, relocation and family law assistance, information on rights as a crime victim, guidance through the criminal justice system, contact local resources and counseling referrals, childcare, emergency assistance, and ongoing support while victims learn to cope, recover and serve as witnesses.

The advocates have been able to act directly, and extend more financial help since the Family Justice Center received the “Family Stability Grant” for two million dollars from the State of California.

The Indio Family Justice Center has advocates who work with victims, witnesses and their families throughout the criminal justice process and beyond.

Cadenas shared several stories of abused and victimized women whose lives were changed through the help and support of FJC.

In one case, an abused woman and her children were able to get away from a dangerous situation after Cadenas was able to simply provide gas money and pay the registration on the woman’s car.

Another women escaped out-of-state with her kids – an illegal act.   But, FJC helped her with paperwork and court orders.  When the woman returned to California to testify in front of the judge, FJC paid for her to stay in a hotel so she wouldn’t have to sleep in her car.

Both Rangel and Cardenas have seen how little things can make a big difference in the lives of victims.

There are three Riverside County Family Justice Centers – in the cities of Indio, Murrieta and Riverside.

A Case For Human Trafficking

Ramona Quintana was at the SafeHouse Protect & Prevent meeting.  She was there because she has a mission.  Quintana is passionate about getting the message out to young people about the terrible reality of human trafficking.

Quintana believes her niece, Chantel Hollowell, was murdered by a man considered to be her trafficker.  Quintana shared what she believes to be the circumstances around her niece’s death.

A beautiful girl, Hollowell was a star athlete and honor student at Palm Springs High School.  In her second year at California State University, Long Beach, Hollowell met a man at a party who “groomed” her –- a process of romantically wooing a victim with false promises and manipulation, and then transitioning the person into a dependent role.

(Traffickers use violence and drugs to gain physical and mental control over their victims.  They look for targets who are vulnerable, have low self-confidence, economic stress and emotional neediness.)

The man introduced Hollowell to hard drugs and took her to Las Vegas where the man wanted to start an escort service.  Hollowell became an escort.

After two years, Hollowell wanted out and to go back to school.  She was looking forward to her future and left the man.  But within weeks, she was found dead in her apartment, a fatal gunshot to her head.

When the police arrived at the scene, the man told them it was suicide.  The police believed him and closed the case.  It was 2006, and Hollowell was just 21 years old.

Four years later, the same man was accused by different women of assault and kidnapping.  He was convicted and sentenced to 13 years in prison.

Riverside police saw the connections and similarities to Hollowell’s case, and notified Las Vegas police.  The man was then charged with Hollowell’s murder.

Last May, the man went on trial in Las Vegas.  He was acquitted.

Quintana wants to develop a program that can be presented to high school students.  She believes that educating young people about human trafficking and how traffickers seek and manipulate their victims is an important start to stopping the growing problem.

According to Quintana, after a human trafficking presentation at a valley high school, two students went to authorities regarding a man harassing them on Facebook, which lead to the discovery of 300 traffickers and 500 victims across the country!

It is not hard to imagine that if Hollowell had been made aware of human trafficking and grooming techniques while in high school, she might be alive today.

SafeHouse of the Desert

Thousand Palms’ SafeHouse of the Desert will be holding quarterly Protect & Prevent meetings in February, May, August, and November every third Wednesday from 10:30am to noon.   The meetings are open to the public.

If you or someone you know needs help please contact the National Human Trafficking Hotline 1(888) 373-7888, or go to the Polaris Textline “BeFree”.  For more information on grooming behavior go to the website EndSlaveryNow.org