There is always a buzz in the PSIFF Hospitality Suite at the Renaissance Hotel.  Filmmakers, media and industry professionals gather to network, grab a bite to eat or meet up before screenings.

Sitting alone is a distinguished, handsome man who –- although he doesn’t seem aware of it — radiates an aura.  He is tall, has broad shoulders, a long black ponytail, and conveys a powerful presence.  He is Native American and exudes star power.  But with all his charisma he is not an actor.

His name is Robert Brown.  He is Ojibwe, Anishinaabe and he is the subject of the non-fiction film The Seventh Fire. 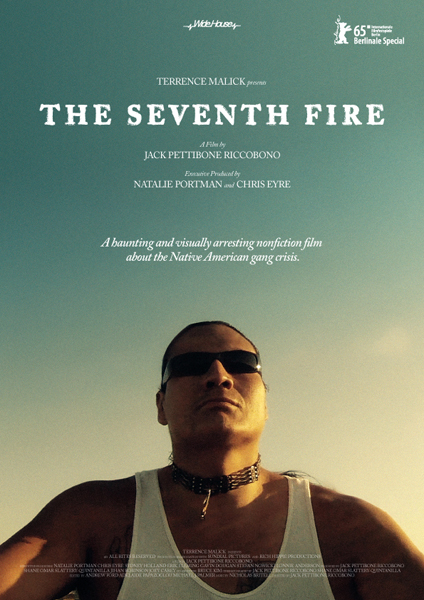 The documentary follows Brown and his young protégé Kevin Fineday.  The films narrative focuses on the Native American gang crisis.   Both Brown and Fineday have ties to the Native Gangster Disciples gang.  The documentary shows the challenges and difficult life on the White Earth Indian Reservation in Pine Point, Minnesota where drugs, alcohol, poverty and violence are a way of life.

Brown was a ward of the state from a young age and lived in 39 foster homes.  He lived on and off the reservation and was in and out of prison five times.  “I think the experience made me a diverse person,” said Brown.

In a sociology class Brown was attending in 2010, he met director Jack Pettibone Riccobono who was screening his first documentary The Sacred Food.  Intrigued, Brown talked to Pettibone Riccobono and suggested he make a film about gang life on the reservation.

“One day he [Pettibone Riccobono] just showed up on the reservation,” said Brown.  “He came with a sound man and a camera man and started filming.”   Shortly after production began, Brown was arrested on a Felony DUI and spent the next 38 months in prison.  With permission from the Minnesota Department of Corrections, the filmmakers were allowed to continue interviewing Brown throughout his incarceration.

When Brown first saw the completed film, he felt nauseous and upset.  “There is a lot of difficult material in the film and it was hard to watch,” said Brown about seeing his life unfold on the big screen.  “I had no idea how dire it was until I saw it.  After the wave of emotion subsided, I was pretty impressed at how well the film was put together.”

The Seventh Fire premiered at the Berlin Film Festival in February 2015 and has since earned nine award nominations on the festival circuit.   The film continues to gained momentum.  “Now there is a whole sense of obligation that comes along with it,” said Brown.  “So, we are trying to use the film for outreach campaigns.”

Brown is thoughtful and takes his time answering what the film means to him and those who see it.    The difficult subject matter gives him pause as he searches for the right words.

“I never really cared what people thought about me, but with this film I see that I have a responsibility.  The film shows a big problem,” said Brown.  “I want to carry the voice of my people and hopefully create some solutions.”

In October, after the Santa Fe Independent Film Festival, Brown spoke to incarcerated youth.  It was there that he discovered his message of self-empowerment.

“It’s the only way I came to be an open and receptive person.  I realized the potential and responsibility I have.  How I got there was to take into account the things I’ve done in my life, and own it.  Make no excuses for it,” said Brown.  “After that screening, instead of being reactive, I was able to walk forward and be proactive.  I try as much as I can to live with respect for myself and others.”

There is something profound about Brown.  Like Dicken’s Ebenezer Scrooge, Brown has had the rare good fortune to see his life unfold before him.  And also like Scrooge, he sees the opportunity to make his life right.  It is a chance to make a difference — and perhaps redemption.

“I am four months into my freedom.  I have had the opportunity to meet wonderful people.  Since this film, I have come to be more of a powerful thinker by incorporating some solid concepts,” said Brown.  “If you base something on respect, good will, integrity, character – I want to say it’s a win-win.  But there is a slim margin of failure.   Some people wake up despising life.  A person should wake up and embrace life.  Be glad to be alive.  But for some, there is a sickness of the soul.”

With humility, Brown recognizes he is now in a position where he can help people.  He is not sure where it will lead.  He is 39 years old and at six feet two inches, he is not only charming and bright, he is imposing.

The title The Seventh Fire is a reference to an Ojibwe prophesy.  The prophetic voice is young and says that the elders have “Fallen asleep” and would “Awaken to this new time with nothing to offer.”   The message will come from the younger generation or “New People.”

The prophesy states:  The light skinned race will be given a choice between two roads – materialism and spirituality.  If they choose the right road, then the Seventh Fire will light the Eighth and final Fire, an eternal fire of peace, love brotherhood and sisterhood.   If they don’t choose correctly, there will be suffering and death to all of Earth’s people.

Listening to Brown talk about the film, his life and the future, there is a sense of hope.  He cannot say where it will ultimately lead, but he hopes it will lead to something better.  Whether Brown realizes it or not, it is hard not to think that it’s Brown himself who must share the prophesy, reluctant as he may be.

The documentary also struck a cord with filmmakers Chris Eyre (Director of Smoke Signals), Terrence Malick (Director of Tree of Life, Days of Heaven, Badlands) and Natalie Portman (Black Swan).  They came on board as executive producers and helped director Pettibone Riccobono actualize his vision.

The Seventh Fire will be shown as part of the PSIFF Student Screening Day, January 11, at Rancho Mirage High School.  Brown will talk to the kids after the screening.  He is certain to make a memorable impression.