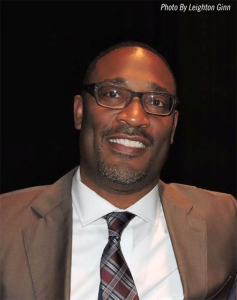 At a recent screening of “THE LONGEST RIDE” at Cinemas Palme d’Or, I sat down with producer and director George Tillman, Jr.  Here’s an edited excerpt of that conversation.

How did you get attached to “THE LONGEST RIDE?

The movies I’ve done before this are completely different from “THE LONGEST RIDE.” The studio came to me. They wanted me to bring something special to bull riding that still had heart! The script needed work. But I thought I could bring something to it emotionally. I’ve been with my wife Marcia since were 16 and now I’m 46. Relationships are a long ride and that’s what I loved about the story. I loved the bull riding and art subcultures.

Tell me about your journey as a filmmaker that got you to this place. Did you make amateur films as a boy?

I’m from Milwaukee, Wisconsin. It’s really cold there, so I spent a lot of time inside watching television with my grandmother. She loved “General Hospital.” One day I wrote “All My Children” and submitted a script. It was returned. I couldn’t afford to go to film school so I went to Columbia College in Chicago and they taught us to write about what we know. I was inspired by Barry Levinson’s “AVALON” about his family coming to America. My grandmother used to cook every Sunday and our family would get together. So I wrote “SOUL FOOD” (1997) about my family. That’s how I really began in Hollywood. 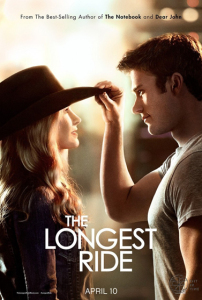 Was “THE LONGEST RIDE” shot with digital cameras or did you use actual film?

Digital is where it is. Everybody can make movies. Anything is possible now.

Tell me about the incredible bull riding sequences.

We used seven or eight cameras, each rider had to ride several times. I think eight rides in all. We shot in slow motion and had to shoot so we could edit them into longer sequences. Most of the rides lasted only a few seconds.

The new iPhones have incredible video.

Yes, you can make a [nice looking] movie using them. The technology is changing so fast, I suggest renting equipment instead of buying.

Would you say something about the charismatic leads in “THE LONGEST RIDE”?

Scott Eastwood reminds a little of his father [Clint] but 30 years younger. But Scott has qualities his father never had. He’s a very vulnerable and soft character. That’s something I really like.  Alan Alda was working on a Broadway play and he agreed. And there’s Oona Chaplin, her grandfather is Charlie Chaplin and Jack Huston comes from John Huston’s family. When Oona and jack signed on to the project, it really came to life.

Did you hear any stories about Clint Eastwood or Charlie Chaplin?

No, I try and stay away from that. Oona, Jack and Scott are very private.

Tell me about the screenplay for “THE LONGEST RIDE.”

When I first read the screenplay, it was kind of a mess. But I saw a story that interested me. The guys who wrote “500 DAYS OF SUMMER” made a pass. I’m interested in what’s not being said in a scene. I like to get reactions when the actors don’t know the camera’s rolling.

How long was the first cut of “THE LONGEST RIDE”?

About two hours and forty-five minutes.  But the studio didn’t care how long it was! Since the movie is about two parallel stories, it was very hard to figure out when to get out of one story and go back to the other. Alan Alda’s B story has to inform Luke and Sophia’s story. And there has to be talk about art. It takes time to find the right balance and eventually we found it. 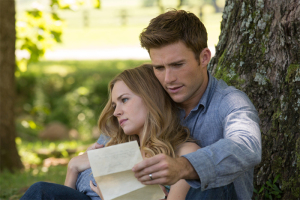 In a love story, the two main characters have to be both protagonist and antagonist. Was that a problem in directing “THE LONGEST RIDE”?

Yes. Both stories had to be about the male characters not moving on. So it had to be set up carefully with Scott and Sophie’s first date. It had to be clear that they had fun but there were other considerations at play that had to be established.

Isn’t the trick of acting not acting?

Yes, I learned that from Robert De Niro when I directed “MEN OF HONOR.” It’s always interesting to see young actors who have never acted in a film use tricks to transition from real life to their movie character.

Was the entire film shot in North Carolina?

Yes. I had never been there before. It’s beautiful. We shot from May to December mainly in Wilmington, Winston-Salem and Greensboro.

Would you comment on the art seen in the film? Was it created for the movie?

No. It’s real. Much of it from Black Mountain, it’s a real place. We got a lot of it on loan. Franz Kline and other contemporary artists work is on display.

I enjoyed this movie a lot more than I expected. I’ve never read a Nicholas Sparks novel but this film is beautiful, moving and actually about something substantial.

Thank you, I appreciate that. I’ve never read Sparks and have only seen one movie adaptation — THE NOTEBOOK.   When I started the project, everyone said Sparks was corny and melodramatic. I just wanted to be conscious about it and honest. And organic as possible.  I wanted to rely on myself and the actors to put our own touch on it. Even though it’s a romance, it has so much to say about life.

In the editing process, can you ever see the movie fresh for the first time!

Yes, it’s never fresh ever! That’s the tough thing for filmmakers. Sometimes you have to open it up. That’s why we have have test audiences. I used to not like it. Early in my career I was always on pins and needles and thought I was going to have a heart attack. But now I see how important it is and embrace it. You want to know who the movie is for. That matters.

It seems to me this film is made for a wide demographic that includes young and old.

Yes, that is what I was wanting to make. One story is for my mom and dad and the other is for my sister. The way the studio is advertising it is for a younger people.

It’s a great date movie, that’s for sure.

I agree with that.

What are you working on now?

I just completed shooting a pilot for NBC and I’m finishing that up. I have a great script, the Miles Davis biopick. It’s on hold until some legal issues are resolved. Like “THE LONGEST RIDE,” it’s two different stories. One takes place in the 1940s and the other in the 60s. I like trying different things.