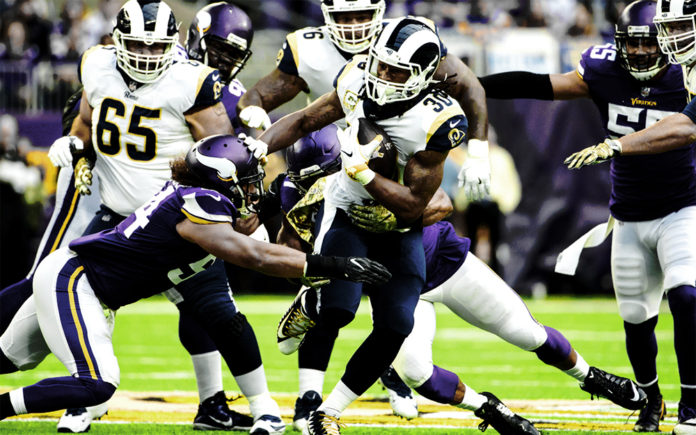 If you jumped off the Rams bandwagon after their ugly 24-7 loss to the Vikings last week, now might be a good time to hop back onto it. L.A. snapped the Saints’ eight-game win streak Sunday with a 26-20 victory, a more-dominant-than-the-score-implies win that pushed the now 8-3 Rams back into the conversation as one of the NFC’s best teams.

Phillips’s defense came into this week’s matchup with the streaking Saints ranked fifth in defensive DVOA, surrendering just 18.6 points per game (seventh) on the year. That group had made up for its middling run defense by being outstanding against the pass, allowing a 76.4 passer rating to opposing quarterbacks (fourth) while racking up 28 sacks (tied for 10th) and 12 interceptions (tied for fifth-most) against just 12 touchdown passes surrendered (tied for sixth-fewest). But until Sunday, it was easy enough to write off much of that success as the result of a fortuitous schedule: L.A. had posted dominant yet caveat-heavy performances against subpar quarterbacks like Scott Tolzien, Tom Savage, Eli Manning, Carson Palmer, Drew Stanton, and Blake Bortles before faltering last week against Case Keenum and the Vikings. The Rams needed an impressive performance against a top-tier passer to prove that those numbers were no fluke, and they got it Sunday, when they sacked Brees three times (a Saints’ season high) while holding the New Orleans offense to just three of 13 on third down.

Defensive tackle Aaron Donald has yet to receive the desired and well-deserved contract extension that precipitated his preseason holdout, but the three-time Pro Bowler remains the foundation upon which L.A.’s defense rests. Donald notched one sack, a pair of tackles for a loss, and a quarterback hit in the win; and while the fact he plays in the trenches hides it, he’s one of the best defensive players in the NFL. Donald is currently Pro Football Focus’s top-graded interior player, with 6.0 sacks and three forced fumbles on the year, and while that sack total doesn’t jump out, he’s racked up an incredible 62 total pressures so far, which outpaces all other defensive players—a feat virtually unheard of for an interior defensive lineman not named J.J. Watt. He’s simply unblockable.

But Donald can’t do it all alone, and the Rams have gotten plenty of production from his linemates, too. Phillips has utilized a heavy rotation of linemen up front: Robert Quinn (who grabbed one sack Sunday to push his season total to 3.5), Matt Longacre (4.0 sacks), Michael Brockers (3.0 sacks), and free agent pickup Connor Barwin (4.0 sacks) make opposing quarterbacks’ lives a living hell.

L.A.’s gotten quality play at every level. Top cornerback Trumaine Johnson has yet to give up a touchdown and has notched two picks on 66 coverage targets, per Pro Football Focus, surrendering a passer rating of just 74.2 to opposing quarterbacks (22nd). Veteran linebacker Mark Barron is a difference-maker over the middle of the field, where he’s racked up 77 tackles, a sack, three interceptions, and four pass breakups, and Alec Ogletree’s knack for big plays recently earned him a four-year, $42 million extension with the team, a vote of confidence in his ability as the defensive signal-caller in Phillips’s new scheme.

You don’t hear all that much about the Rams’ overhaul this year from a 4-3 to Phillips’s nominal 3-4 because Phillips and his staff have done an outstanding job of integrating a cadre of new players into the scheme while finding new spots for existing players to thrive. Phillips came to L.A. with a reputation for crafting his scheme around his players’ strengths, and because of his keen eye for talent and adaptability as a play-caller, the Rams (who fielded a solid defensive unit last season) have not only picked up his defense with little trouble, they’ve actually gotten better.

McVay’s offense (featuring Goff, Todd Gurley, Cooper Kupp, Robert Woods, and Sammy Watkins) is likely to continue to headline the Rams’ surprising metamorphosis into an NFC power, but L.A. wouldn’t be sitting atop the NFC West right now if it weren’t for the team’s underappreciated improvement on defense, too.