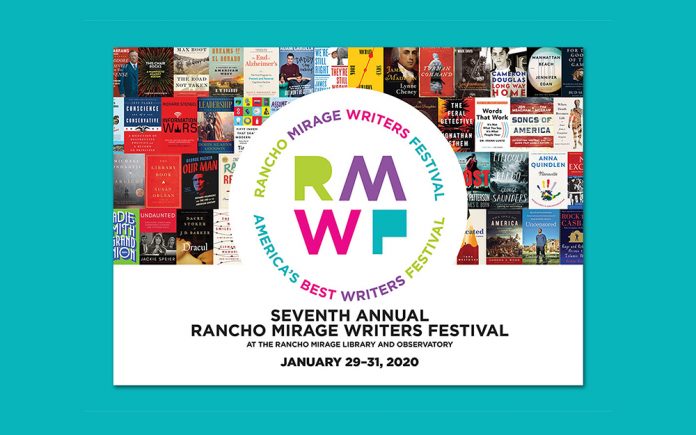 The Coachella Valley is known globally for its colorful and popular festivals.  But it is not just the movie and music fests that have brought prominence and notoriety to the region.

The Rancho Mirage Writers Festival may not draw hundreds of thousands of visitors and millions of dollars in tourist revenue to the community, but it draws the most influential, intellectual and expert voices of the day to discuss their work, politics and the pressing issues of our time.

The Seventh Annual Rancho Mirage Writers Festival held at the Rancho Mirage Library and Observatory January 29 – 31, celebrates the written word, readers and big ideas.  Here is a glimpse of the heavy-hitters and literary marvels that are featured in the festival.

This year the fest focuses on the upcoming 2020 election.   With the Iowa caucuses just days away, prominent pundits and political persuaders will share their opinions on how the year may unfold and what it all means.

Panelists James Carville, Senator Jeff Flake, Karl Rove and Bret Stephens debate who will be the next president and why he or she should be the next Commander-in-Chief.

Richard Stengel, former Time editor, and Under Secretary for Public Diplomacy and Public Affairs, gives an insider account of the rise of disinformation and how social media has been weaponized and used by ISIS, Putin and Trump.

This year marks the 100th anniversary of the 19th Amendment that gave women the right to vote.  In the program “Celebrating Women” Mary Cunningham Agee, the Honorable Barbara Boxer, Chief Justice Tani Cantil-Sakauye and Anna Quindlen comprise a panel to share what remains to be accomplish for future generation of women.

Three-time Grammy winner and country music super star Tim McGraw and Meacham talk about collaborating on their book “Songs of America: Patriotism, Protest and the Music That Made a Nation.”

Rancho Mirage has long been the playground for Presidents so it is always apropos to get the low-down on POTUSes past and present.  Dr. Lynn Cheney and Pulitzer Prize-winner Gordon S. Wood discuss James Madison, the “Father of the Constitution.”

Chief of legal affairs for ABC News, Dan Abrams talks about his book “Theodore Roosevelt for the Defense: The Courtroom Battle to Save His Legacy.”

Susan Eisenhower participates in a program about “The White House Years” with Cheney and Rove.

“Issues in U.S. foreign Policy” is a panel with Max Boot, James Fallows, George Packer and Robin Wright.  The discussion focuses on what American foreign policy should or should not be.

Journalist Robin Wright shares her insights of the Middle East with her book The Casbah: Rage and Rebellion Across the Islamic World.

Non-fiction faves in attendance are Susan Orlean with her latest book The Library Book; Tara Westover with her bestseller Educated: A Memoir; H. W. Brand shares his book Dreams of El Dorado.

Author Clemantine Wamariya shares her story growing up in Africa in The Girl Who Smiled Beads.

Zachary R. Wood talks about his book Uncensored: My Life and Uncomfortable Conversations at the Intersection of Black and White.

Jennifer Egan is set to share tips with author Quindlen in the program: “Get a Cat, Get Offline, Don’t Drink: Writers on Writing.”

As much as the RMWF loves history and politics, it keeps a sense of humor and never forgets the joy of reading for entertainment and the importance of fiction.

Short story writer turned novelist George Saunders talks about his book Lincoln in the Bardo.  Michael Chabon and Zadie Smith discuss the art of writing in the program “Fact or Fiction?”  Katherine Nouri Hughes shares her insights on writing her novel The Mapmaker’s Daughter.  Michael Ondaatje author of The English Patient talks about his novel Warlight.  Author Jonathan Lethem discusses his latest work set in the California desert, The Feral Detectiv,.  Elizabeth Cobbs attends with her historical novel The Tubman Command, which was adapted into the major motion picture still in theaters “Harriet.”

RMWF consistently includes health and wellness programs.  This year Dr. Joshua Mezrich, who “creates life from loss,” shares his research in When Death Becomes Life: Notes from a Transplant Surgeon.  Dr. Dale Bredesen speaks about his book The End of Alzheimer’s: The first Program to Prevent and Reverse Cognitive Decline. Activist and TED speaker Ashton Applewhite discusses This Chair Rocks: A Manifesto Against Ageism.

The CV is also a getaway for celebrities and the RMWF never forgets its close ties to Hollywood.

Producer Peter Spears chats with novelist André Aciman (Call Me by My Name) about his new book Find Me.

Multiple programs run throughout the day beginning at 8:30am until 3:00pm.  Lunch is included as is valet parking and free coffee and snacks.

C-SPAN covers some of the festival, but the library records most of the programs and posts them on YouTube after the event.

The Seventh Annual RMWF sold-out last year in less than four hours.  Tickets for next year, the Eight Annual RMWF, go on sale in March.  Check with the library or the RMWF website for details.

The Rancho Mirage Library and Observatory provides an intimate setting where writers and readers can mingle and share ideas.  Eighty percent of the festival expenses are funded by “Angels Donations.”

The RMWF is the valley’s most prestigious and thought-provoking event.  This is an extraordinary festival packed with incredible authors, moderators, thinkers and influencers.  It is a festival driven by a passion for life-long learning and the excitement of experiencing new ideas.