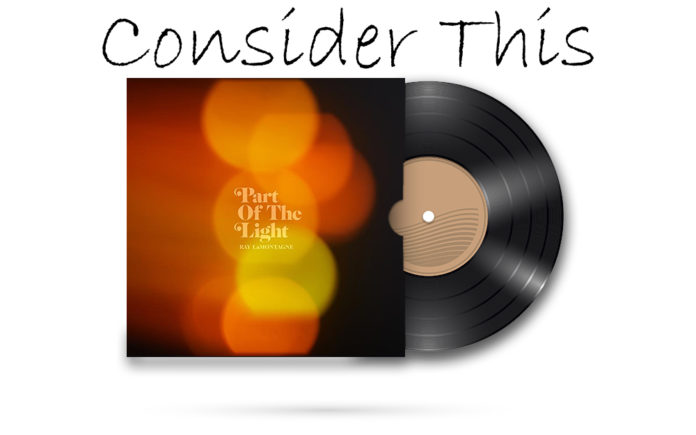 Does it feel like the entire weight of the world is on your shoulders these days? If you’re looking for a little musical respite to sooth your jagged nerves, perhaps some Ray Lamontagne will assuage your psychic pain, music soothing the savage beast, (breast?) and all that. Any of his albums will do, but his latest, Part Of The Light is especially nice.

Ray Lamontagne’s musical epiphany arrived via a clock radio. Work in a shoe factory meant waking up at 4am, on that fateful morning, the music that got his senses working overtime was “Tree Top Flyer,” a cut from a rather obscure Stephen Stills album entitled Alone. Hearing that song inspired Ray to skip work and go buy that record instead.

Born in Nashua, New Hampshire in 1973, Ray was one of six kids. His father left the family when Ray was an infant, earning his keep as a touring musician. His mother’s job search meant the family never stayed in one place for long. He endured a nomadic childhood, moving from New Hampshire to Nebraska, Oregon and Utah. Sometimes they stayed with relatives, at one point they lived in a school bus. They even inhabited a chicken coop for a spell.

Following graduation, he drifted for a while, finally landing in a cabin in rural Maine, eking out a living as a carpenter. The shoe factory provided more steady employment, but once he bought the Stephen Stills album, he never looked back. Consumed by music, he began to explore artists like Bob Dylan, the Band, Nina Simone and Neil Young. He quickly absorbed Folk, Jazz and Rock influences, finally feeling confident enough to pick up a guitar.

Music became his religion and Ray gigged throughout the ‘90s, honing his craft in pubs and coffee houses. During this era he married and had two sons. Recording a series of demos netted him a publishing deal and a producer, Ethan Johns, (Victoria Williams, Jayhawks, Ryan Adams). Once he signed with the RCA label, he and Ethan recorded his debut, Trouble, in just two weeks.

It was released in 2004 with little fanfare. Stacked next to the crap that clogged the charts, Rascal Flats, Ashlee Simpson, yet another torpid standards collection from Rod Stewart, Trouble was a welcome respite. The husky timbre of his vocals sounded like a blend of Cat Stevens, Van Morrison and Joe Cocker. His words and melodies echoed classic antecedents like James Taylor’s “Sweet Baby James” and Van Morrison’s “St. Dominic’s Preview.”

Surprisingly, the album steadily climbed the charts. Ray’s songs popped up in movies like “The Boys Are Back” and “She’s The Man,” they also scored tender moments on TV shows like “Alias” and “Rescue Me.” By 2006, American Idol contestants were over-emoting Ray Lamontagne songs on the reg.

For his second effort, 2006’s Till The Sun Turns Black, Ray executed a stylistic 180, swapping out the warm textures of his debut for a fragile angst that recalled troubled troubadours like Tim Buckley and Nick Drake. He continued to resist being pigeonholed, adding a horn section for his third record, Gossip In The Grain, which arrived in 2008. By turns passionate, playful and sensual, he drew comparisons to R&B progenitors like Sam Cooke and Otis Redding. The common denominator of each record was the impeccable production from Ethan Johns.

By 2010, recalibrating his sound was almost de riguer. His fourth outing, God Willin’ & The Creek Won’t Rise was credited to Ray Lamontagne and the Pariah Dogs. The album offered up a potent combo-platter of gritty Funk, rustic Country Rock and soulful ballads. Self-produced, the record received two Grammy nominations, winning one for Best Contemporary Folk album.

From 2004 to 2010, a new Ray Lamontagne record would appear like clockwork, every two years, but once he came off the God Willin’ tour, Ray withdrew for a spell. He retreated with his wife (and high School sweetheart), poet Sara Sousa and their teenage sons to their cabin in rural Massachusetts. Burned out and disenchanted with the music industry, he considered quitting all together.

Luckily, his sabbatical only lasted four years. Enlisting Black Keys front man Dan Auerbach as producer, he came roaring back in 2014 with Supernova. Living up to it’s name, the record burned brightly, radiating light and energy, pleasing fans and critics alike. His sixth record, Ouroboros, almost felt like a concept record. Produced by Jim James of My Morning Jacket, it was modeled after Talk Talk’s Spirit Of Eden album and garnered comparisons to Pink Floyd’s Dark Side Of The Moon.

Now Ray has returned with his seventh effort, Part Of The Light. Strummy acoustic riffs greet the listener like an old friend, on the opening cut, “To The Sea.” Bent electric guitar notes layer over soothing keys and a chugging backbeat. Hewing closely to the paradigm Simon & Garfunkel created on their 1967 masterpiece, “America,” the song unspools as something of a travelogue. Rich details of a trip to the beach, it begins with some last-minute minutiae; “I’ll be waiting in the car, don’t forget the camera, and if you wouldn’t mind, could you find my yellow shoes? I think they’re under the stairs…”

The aural equivalent of psychological snapshots and postcards, the lyrics revel in the moment, but also hint that the song’s central relationship no longer feels effortless; “You were making me smile. It was easier then, when? …oh… but then again/All of the questions in my head, I’ll paint them red, put them to bed.” The breezy melody nearly camouflages the marital ennui.

“Paper Man” kind of flips the script of “To The Sea.” Splitting the difference between somber and urgent, fluttery acoustic riffs collide with shuddery electric guitar as the tempo gathers speed. Confounding convention, he insists he will follow his muse and kick against the Pricks, defiantly asserting “I won’t play along, as long as I’ve got a song I will sing.” Although the instrumentation is just two guitars, bass, drums, pedal steel and synthesizer, the arrangement is vivid and cinematic.

As with previous efforts, Ray consistently subverts expectations. This time he efficiently toggles between subdued Soft Rock and almost bombastic heaviosity. With its feathery acoustic guitar, lowing bass lines and quavery vocals, “Stay A Little While” shares some musical DNA with early ‘70s hitmakers Bread. Although the lyrics display an “carpe diem” urgency, the listener half expects him to find a diary underneath the trees or inelegantly announce “baby, I’m-a-want you.” Still, his lazily seductive mien is entirely charming.

The title track blends ascending guitar chords with a thump-thump beat, spongy synthesizer and Fender Rhodes. Despite the sedate quietude, the lyrics tee up a stinging indictment on the 1%; “For everyone resplendent in the wealth of kings, thousands upon thousands only suffering…when kindness is the greatest gift that one can share, why choose to subjugate your fellow man?”

Meanwhile, “Such A Simple Thing” fuses Country comfort and sanctified Soul. Liquid acoustic arpeggios align with rough-hewn bottleneck riffs, high lonesome pedal steel, and lush keys. A few deft lyrics sketch out a romantic impasse that he hopes to rectify; “Tell me what your heart wants, it’s such a simple thing/My heart is like paper, yours is like a flame.”  The song exhibits a grit and gravitas that recalls The Rolling Stones’ epochal “Wild Horses.”

He opens up the throttle on two tracks, “As Black As Blood Is Blue” and “No Answer Arrives.” On the former, it sounds as though Ray has recently become (re)acquainted with vintage Black Sabbath. Crunchy power chords, menacing bass lines and shifting time signatures provide ballast. Whiplash riffs lock into a Guitar-Hero groove before exploding with a bone-shaker solo. Brittle piano and frenzied Fender Rhodes swirl around a hiccough-y meter, as mental acuity unravels; “If I could paint my delusion, I would paint it in colors bold.”          Ray fully floors it on the latter, drifting into Humble Pie or (their 21st century equivalent), Rival Sons territory. Spooky keys straddle Fuzzy guitar, roiling bass and a hopscotch beat. His vocals are suitably scratchy, howling and growling with abandon. Addressing these fractious, jingoistic times he asks “Where is the joy? Where is the joy I used to feel inside?/All of us asking the questions and yet…no answer arrives.” Best described as Metallic Psychedelia, the song clocks in at just past the five-minute mark before shuddering to a halt.

The Soulful center of the record can be found on “It’s Always Been You.” Intime and elegant, it unfurls slowly. A kick-drum beat is cocooned by shivery electric guitar, drone-y mellotron and achingly sincere vocals. Hazy and slightly hypnotic, it’s a cogent encomium to the life-long love affair he’s had with his wife; “Since the first star split the black, split the silence too/Since the first dawn woke this earth and found it clothed in blue, since the first bird-song was sung, as through the air it flew/It’s been you…it’s always been you.”

The album closes with its most ambitious track, “Goodbye Blue Sky.” Not only does it share its title with a seminal Pink Floyd cut off “The Wall,” it seems equally expansive. Sugary Spanish guitar washes over sighing pedal steel, rippling piano and brushed percussion. Initially, it feels like another easy-going panegyric, but midway through it shifts gears, as thrashy power chords crash over an accelerated rhythm and stately piano runs. A soaring guitar solo skitters and quakes pushing the song toward interstellar overdrive. Spacey yet concise, it’s the ultimate cosmic exhale.

Ray Lamontagne is a guy who pares life down to the essentials, walking away from the music industry for years at a time. An ascetic who lives off the grid sans electricity and running water, he rejects the typical trappings of Rock Star life. Hedonism is less appealing than solitary rides on his motorcycle. By striking this balance he manages to filter out the extraneous noise and concentrate on what matters.

Take a page from Ray’s book. Put down the cell phone, disconnect from the internet and take a break from social media. Make a musical date with Part Of The Light. Your battered psyche will thank you.