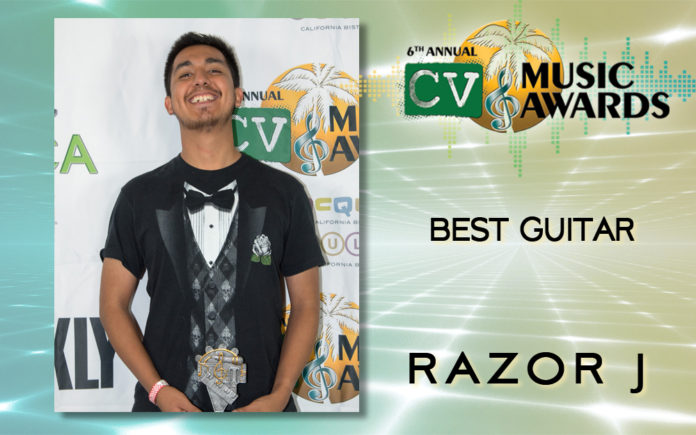 Where else can an individual artist win an award for ‘Best Guitar’ and be nominated for ‘Best Rap/Hip Hop’ in the same year? The Coachella Valley of course! The degree of talent in our backyard continues to surprise many. We are truly rich with those who use inventiveness in the music they create. RAZOR J is such a person. With his unique picking style using mainly the index and middle fingers in an alternating fashion and a versatile background playing everything from Jazz to Hip-Hop, Indio native RAZOR J earned the most votes in the ‘Best Guitar’ category at the 2018 Coachella Valley Music Awards.

CVW: You won the 2018 CVMA for Best Guitar. What did it feel like when you found out you were nominated and ultimately when you won?

Razor J: “I’ve been nominated before and it’s cool that people even recognize my ability as a guitarist at all. To win was great! I remember growing up and being influenced by artists like Jimmy Page, Eddie Van Halen, Jimi Hendrix and thinking I wanna be great like them. I’m not, but I would like to think this means I’m on my way.”

CVW: You were up against some major players in Kal David, John Carey, Tom Edwards, Nick Hales, Arthur Seay, Alex Santana, Martin Barrera, David Morales and Luis Diaz. Those are some heavy-hitters in our local music industry. It says a lot about your maturation and increased influence among music fans.

Razor J: “I’ve met most of the other guys who were nominated and have heard them all, even jammed with some of them. There’s a lot of talent there so it’s crazy that I won, but I thought one thing that was really cool is that stylistically a lot of ground was covered ranging from Metal to Jazz. I love a lot of styles of guitar so that’s great to see.” 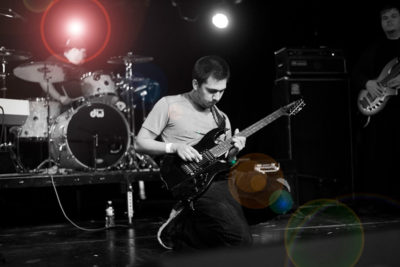 CVW: You were also nominated for Best Rap/Hip Hop. That’s an unusual duo of nominations. Do you have a preference or do guitar and Hip-Hop go hand-in-hand for you?

Razor J: “Those two were the best nominations I could hope for. It’s unusual I suppose because not very many famous rappers play guitar or vice versa, but they definitely go together with me. Huge rappers like Kendrick Lamar, Future, and Cardi B have live bands they play with where they have guitar players who sometimes take solos. In my case, I just so happen to be the guitar player, kind of like Prince if he rapped instead of sang.”

CVW: You have recently performed with Cakes. What is that experience like?

Razor J: “I love playing with Cakes, she’s great. I enjoy playing with her and a lot of other people in the valley. I’m mostly focusing on my music, I have an EP dropping in August 2018, but anytime it works out playing with other local musicians it’s great.”

CVW: What does it mean to be an integral part of this community?

CVW: You were involved in music from an early age. You also have a unique style in playing the guitar. Tell us how it all began.

Razor J: “I played trombone for years in marching band, but I started playing guitar in an afterschool Mariachi band. I learned from a guy who knew a little bit about flamenco and my band teacher showed me how to play basic classical guitar. So when I switched to electric guitar, I’d been playing with my fingers and just decided to keep doing that. A lot of guitar players are thrown off by the fact that I rarely use a pick, even when playing metal or shred stuff. They usually think my technique comes from bass playing because I pick strings with my index and middle fingers, but it comes from the ‘Picado’ technique in Flamenco. People like Spanish virtuoso Paco de Lucia were masters of it. I also play a little like Jazz solo performers Charlie Hunter and Joe Pass.”

CVW: You made a decision to really pursue Rap/Hip-Hop more seriously. Who are your Rap/Hip-Hop heroes?

Razor J: “My Hip-Hop heroes are Eminem, Big Pun, Kendrick Lamar, and Joyner Lucas. I love a lot of rappers, but I’m really inspired by MCs who have complex and crazy flows. Just as with guitar, songs don’t require ridiculous technique but I like to work on mine so I don’t feel like I have any limitations to ideas in my head.”

RAZOR J may have won Best Guitar, but his overall musical proficiency makes him one of the Best Musicians in the valley. We look forward to his new release this summer. Until then, you can listen to and purchase his music on Bandcamp. Highlights of his most recent release are Can A Drummer Get Some and Truffle Butter ft. System D.