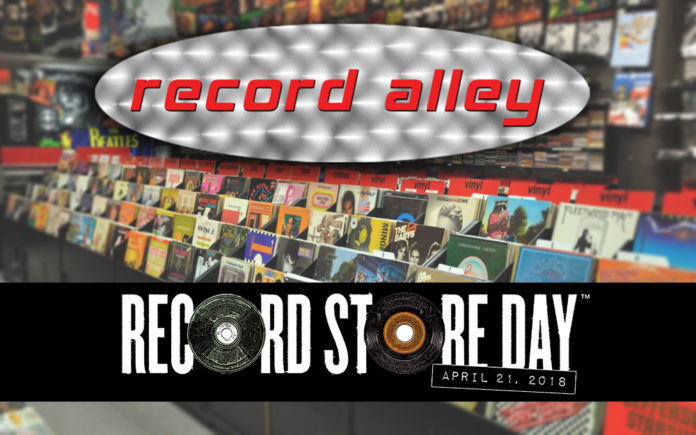 April 21st, 2018 marks the 10th anniversary of Record Store Day. Back in 2007, Bull Moose Music employee Chris Brown suggested an annual event that was comparable to Free Comic Book Day. At a gathering of Independent Record Store owners and employees, that idea took shape as Record Store Day, a unique way to honor the remarkable culture that surrounds the nearly 1,400 stores that continue to thrive in the United States.

The first Record Store Day happened on April 19, 2008. Artists and record labels came together to create special CDs and albums that bypassed chains and big box stores, and were only available at Independent Record stores. Metallica acted as the inaugural Record Store Day Ambassadors that year, meeting and greeting fans at Rasputin’s in Mill Valley California.

Since then the annual event has occurred on the third Saturday of April and has become a worldwide phenomenon. Artists like Wilco, Emmylou Harris and Mastodon have popped up in their local stores offering support, encouragement and sometimes even live in-store performances. In recent years ambassadors have included Foo Fighter Dave Grohl, Jack White and St. Vincent. This year, the honor belongs to Hip-Hop duo, Run The Jewels.

In the desert, Record Store Day feels particularly special as it coincides with the Coachella Valley Music And Arts Festival. Locals and visitors have always known the best place to find music here in the desert is the Record Alley. The store is also celebrating a milestone: It’s their 40th year in business.

Music connoisseur Jim Stephens originally opened his store in Palm Springs Back in 1978. Although there were already several record stores throughout the valley, Record Alley immediately built their reputation by stocking hard to find imports alongside Top 40 favorites. Jim made sure to offer a wide-ranging selection of Punk, Funk, Prog-Rock, Disco, R&B, Country, Jazz and Blues. In those days, retired golfers in sans-a-belt slacks could pick up the latest Frank Sinatra eight-track, while spiky-haired Punks purchased an import Xmal Deutschland 7” single.

Knowledgeable fans bypassed closer stores and made the journey to Palm Springs, knowing employees like the late (great) Phil Liebert, Jack Epsteen or Mike Keane could be counted on to recommend new or old music that might just blow your mind. In 1985 Jim made the trek a little easier by centrally relocating to what is now the Westfield Mall in Palm Desert.

Along with his wife and co-owner, Shelly DuBose Stephens, Jim has continued to stay on top of music trends. They rely on a knowledgeable staff that includes Eleni P. Austin, Lauren Ivy Holm and Matt Olson. Coincidently, Eleni also began her record retail career in 1978, as a high school sophomore at the Record Shop in the Indio Fashion Mall.

She spent 19 years working her way up through the ranks at the Wherehouse in Palm Springs and held music management positions at Borders Books and Barnes & Noble. Lauren Ivy Holm was originally hired by Eleni at the Wherehouse over 15 years ago. She worked for Record Alley for many years before segueing to Amoeba in Hollywood in 2007. She’s been back at Record Alley for two years. Matt recently joined the staff but made his bones at record stores in his home state of Minnesota, as well as stints at chain stores like Tower and the Wherehouse. 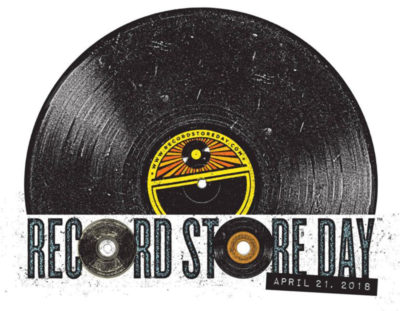 This year Record Store Day has over 400 titles available exclusively to indie record stores. “We order as big a variety as we can,” noted Eleni, who has been at the store for seven years. “We won’t know exactly what we’ll get until a day or two before the event. We are competing with thousands of other stores for a finite amount of product, so we don’t always get everything we request.”

Hit compilations are available from Eric Clapton, the Cure, Madonna, and Soundgarden. For the more adventurous aficionado there are demo recordings from Fleetwood Mac, Van Morrison, the Ramones, and Frank Zappa. Rap is well-represented with offerings from Compton’s Most Wanted, Dr. Octogon, J. Dilla, Lil’ Uzi Vert, Living Legends, Notorious B.I.G., Too Short, and The Wu-Tang Clan. Various Artist compilations include classic Northern Soul and the “Girls In The Garage” series. You can find soundtracks for Twin Peaks and the Who’s “Kids Are Alright” documentary. Plus epic 7” singles from Led Zeppelin and the Police.

“This is the event we look forward to all year,” Eleni shared. “Since it syncs up with Coachella we typically have longtime, loyal customers lined up next to music fans from around the world. It’s first come, first serve,” she added, “but we go out of our way to accommodate everyone, making it a fun day and hopefully a memorable experience.”

(Record Alley opens their doors at 10am. The store is located on the lower level of the Westfield Mall at 72840 Hwy 111, Palm Desert. For a current and complete list of on-going sales and merchandise, check out their website, recordalley.com and for their latest news, follow them on Instagram.)