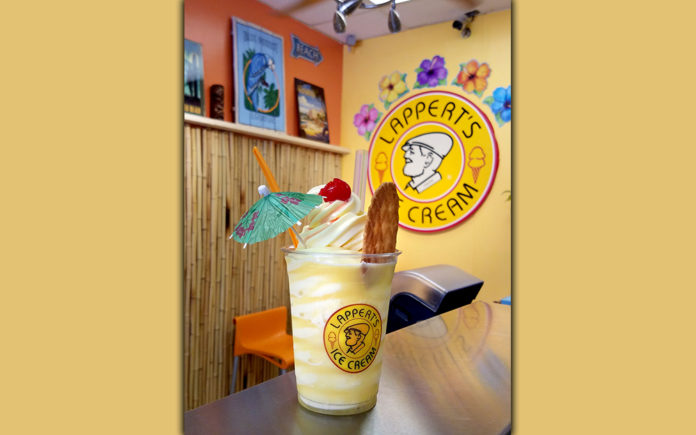 One of the best ways to get some tasty relief from the desert summertime heat, is with a refreshingly cold sweet treat from Lappert’s Ice Cream & Dole Whip.

The last thing that I need to do is to tell you that it’s hot outside. Anyone who lives in, or has visited the Coachella Valley in the summer months should know well enough of what to expect here from June through September….a whole lot of sunshine and toasty high temps. But there are so many ways to combat, and even make summertime fun in the desert, that it almost makes this time of year something to look forward to.

To cool down, you could take a chill dip in a pool, shop at the air-conditioned indoor mall, ice skate, or do something that will make your taste buds want to throw on a coat, and have some icy cold deliciousness from Lappert’s Ice Cream & Dole Whip. The Hawaiian themed ice cream shop has been delighting their customers for many summers, in Palm Desert and Palm Springs.

Owner Joe Genua, who has just recently taken over the Palm Desert store and also has Jus Chillin in Palm Springs, enjoys giving a little Hawaiian cool sweetness to the desert. Lappert’s Ice Cream started back in 1983, by founder Walter Lappert, who wanted to expand on his little ice cream shop in Northern California, and make/sell ice cream in Kauai. Lappert did exactly that, and visitors can still visit his original factory on the island.

His concept was brought back the mainland, with his son Michael Lappert, who opened up a factory in Richmond California, broadening the reach of their scrumptious hand crafted ice cream. One aspect of their ice cream that enhances the creaminess is the high fat content, which elevates the ice cream to a different level. The stores rotate over 100 flavors, such as Banana Cream Pie (fresh banana’s, buttery pie crust pieces), Rum Raisin (dark rum soaked raisins, light rum sweet cream), and Mexican Chocolate Cinnamon Swirl, plus many, many more, bringing the most innovative tastes to their customers. 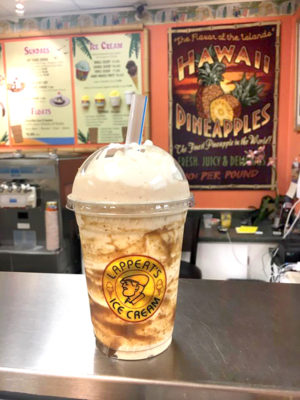 Besides their ultra-creamy ice cream, Lappert’s also features the Dole Plantations creation, Dole Whip, made famous by Disneyland’s Tiki Hut. The Dole Whip comes in a soft serve form, and is vegan, as well as dairy, fat and gluten free. One spoon full of the Pineapple Whip, and you are quickly whisked away to a Hawaiian island, the tropical breeze swirling around you with a burst of sweet pineapple dancing on your tongue. It’s freakishly refreshing. The Whips come in other flavors such as Raspberry, Orange and Mango, but it is clear that the Pineapple option is the headliner. A parade of toppings are available to dress up the Whips. However, for true octane, go for the Dole Whip Float, where the whip is immersed in fresh pineapple juice topped with whipped cream and a wafer. Sweet fruit overload!

Lappert’s also offer’s other chilly treats including Shaved Ice in fun flavors including Watermelon, Lime, Root beer, Grape, Cherry , plus Shakes (try their phenomenal Date Shake with Coachella Valley Dates), Smoothies and Sundaes. You can give those high summer temps the big freeze in a variety of ways at Lappert’s.

Genua looks forward to making some upgrades to the Palm Desert shop. In the coming months customers will enjoy extended full-service, more non-dairy options, an amped up Hawaiian vibe and a special Acai and Pitaya scoop-able, super-fruit sweet.

Whether the weather outside is super-hot, cold or just right, having a cool treat from Lappert’s Ice Cream & Dole Whip is a tasty pleasure all year round.