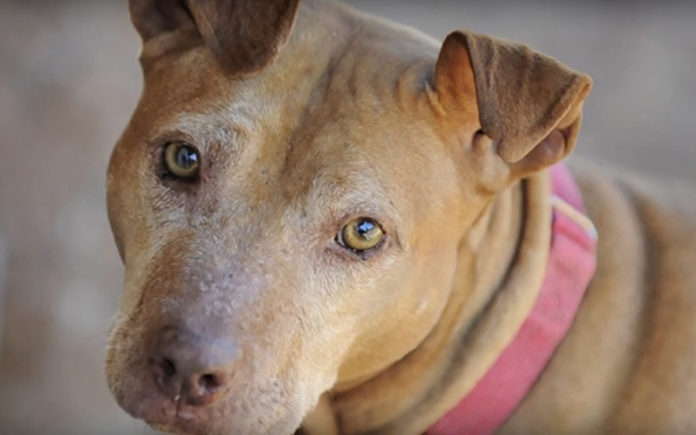 On April 2, 2017, a dog named Little Red passed away, just 6 days before Dog Fighting Awareness Day which is always observed on April 8.  Little Red was one of the 50 surviving dogs rescued from Michael Vick’s notorious dog fighting operation.  This famous survivor died peacefully at the age of 15 years, in a loving home with her human and surrounded by her bonded canine pack.

There were 50 live pit bulls rescued from the property, and the story of those “Vicktory” dogs and their transformation is a landmark saga teaching us valuable information about the resilience and ability of dogs to overcome even the darkest past.  Only one of the dogs was euthanized for aggressive behavior.  In 2007, it was standard policy to euthanize all animals seized in a fighting raid.  Many voices, including The Humane Society of the United States, called for these dogs to be euthanized.  Some argued that funds and effort expanded on them could be better spent on “less damaged” dogs.

Animal welfare groups Best Friends Animal Society, BAD RAP, and SPCA for Monterey stepped up to take in the survivors, and were carefully screened for their ability to train and rehabilitate.  The dogs were scarred, both physically and emotionally, and their fate was uncertain.  The groups took in animals who survived a living hell, a hell where dogs that performed poorly in fights were beaten, electrocuted, drowned, and hanged.  The results of the retraining programs were nothing short of miraculous.  Once the dogs had enough positive experiences to draw on, they just ran into the present.

Little Red went with a large group of the dogs to the beautiful and renowned Best Friends’ sanctuary in Utah where a special program and expert trainers worked intensely with them.  Little Red was a bait dog during the 5 years spent at Vick’s property, and we can only imagine the physical harm and fear she experienced.

The success of this massive rehabilitation program changed the way most public and private organizations evaluate dogs seized in fighting raids.  Today, each dog is evaluated on an individual basis.  This nationwide experiment showed impressive results in that with time, patience, training and love, the most abused animals could transform.  Almost all of the Victory dogs now live happily in family homes.

Some of the dogs even became certified therapy dogs, including Jonny Justice who became ASPCA Dog of the Year.  Another dog comforts hospital patients.  Little Red amazed everyone when she  passed a milestone, acquiring her Canine Good Citizen Certificate.  In 2011, Susan came to Best Friends to volunteer, and asked to meet Little Red.  It was love at first sight, and Susan was approved to adopt the dog.  In 2013, Susan reported, “I never think that Little Red has been rehabilitated.  She didn’t need to be rehabilitated.  She needed to ‘recover’ from the debilitating physical and emotional trauma she experienced for 5 years as a bait dog.”

Sometimes at night Susan would sense Little Red was having disturbing dreams, and would wake the dog up to reassure her she was safe.  But the dog’s days were filled with happiness as she romped with Susan’s four other pups.  Susan explains, “Who would think a dog who has suffered so much would care about simple pleasures.  She loved her treats, especially antlers.  Sometimes Little acts like the puppy she was never permitted to be. She did not dwell on her past, so I didn’t either.”  She loved hiking through the fields with Susan, and snuggling by her side at the evening.  She had a huge heart, and loved to run and play.

Like the other Vicktory dogs, Little Red’s legacy will be making people aware not only of the brutality of dog fighting, but the proven fact that the survivors can go on to thrive and live happy lives.  Thanks to Little Red and the others, states like California passed laws that end the automatic labeling of dogs rescued from fighting operations as “vicious”.  Instead, the survivors are now individually evaluated by veterinarians and dog experts.

Susan shared her grief over the loss of her beloved dog on Little Red’s Facebook page, “I am devastated and still in shock.  I cannot adequately express the depth of my grief for my sweet little dog.  We hope you will remember Little’s life and keep alive the fight to save animals who have been abused, abandoned and who have suffered, no matter what the circumstances.”  These dogs, given a second chance, have many lessons to teach us about resiliency, forgiveness, and unconditional love.  Their spirits remained unbroken by human cruelty.

The remaining Vicktory dogs are seniors now, living out the end of their lives with happy endings no one expected.  May we never forget them, and the lessons they taught us.

You can read more about Little Red on her Facebook page, appropriately called “Little Red”.  I recommend the marvelous book about the Vicktory dogs by Jim Gorant, THE LOST DOGS.  Their stories teach us that even after being exposed to heart breaking abuse, above all, a dog still wants to be man’s best friend.