LIVING LARGE ON SCREEN AND OFF 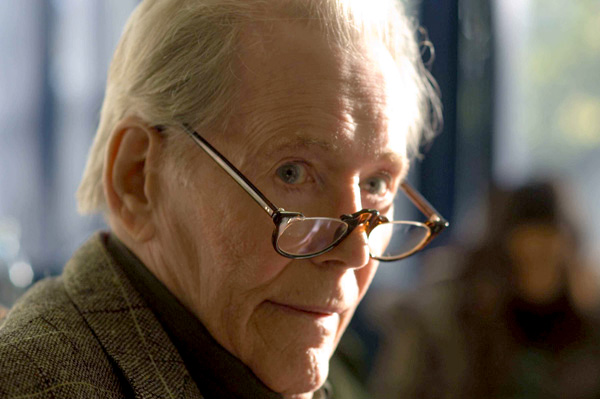 He passed away at the age of 81 on December 14, 2013, in London. His remains were shipped in a wicker coffin to his place of birth, where he had a lived in the 1970s in a home overlooking the sea. He had left instructions that his ashes were to be scatted over the sea below his birthplace.

His death was not unexpected. It was the fact that he survived into his 80s that surprised those who knew him. Beside his extraordinary gift for performance, his astonishing singular voice and his enormous personal charisma, he was a hell-raiser and charming eccentric. He lived an unfiltered life without regrets. Some of his personal views and remarkable stories are recounted in his own book “LOITERING WITH INTENT.” Another book, “HELL-RAISERS: The Life and Inebriated Times of Richard Burton, Richard Harris, Peter O’Toole, and Oliver Reed” by Robert Sellers is a boozy, jaw-dropping anecdotal biography of the hijinks of these drinking buddies.

O’Toole’s drinking was curbed in the mid 1970s when a health crisis forced his pickled guts to undergo a surgical overhaul. He said, “Booze is the most outrageous of drugs, which is why I chose it.”

O’Toole was raised in Leeds, England. He said he came from criminals. He attended a Catholic school where the nuns beat him to correct his left-handedness. His father was a bookie and young Peter planned on being a journalist. He started as a copy boy and actually worked as a reporter.

Almost as a fluke, an accident of fate, he discovered the stage and made his debut at the young age 17. After serving two years in the Royal Navy (as a radioman), he attended, on a whim, the Royal Academy of Dramatic Arts where his classmates included Alan Bates, Richard Harris and Albert Finney. He said, “I hitched to London on a lorry, looking for adventure. I was dropped at Euston Station and was trying to find a hostel. I passed the Royal Academy of Dramatic Art, and walked in just to case the joint.” Later he remarked on how that whimsical, chance encounter changed his life. He auditioned at the RADA and was accepted. 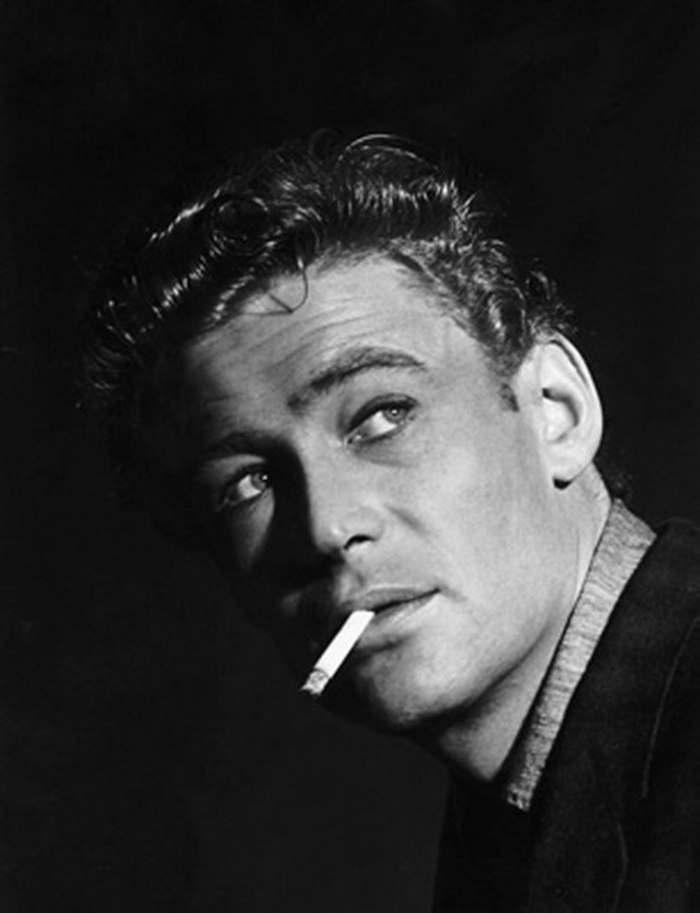 All his life, Peter O’Toole never lost his love for the stage, and although he made nearly 100 films, only a handful of exceptional films followed his feature film debut as the titular lead in David Lean’s 1962 LAWRENCE OF ARABIA. Actually, O’Toole has one or two smaller film roles before being cast as T.E. Lawrence.

A few years ago when a restored print of LAWRENCE OF ARABIA was screened in Hollywood, there was an audible gasp during the opening credits when “Introducing Peter O’Toole” scrolled across the screen. How was it possible that this 29 year-old unknown newcomer could be so accomplished as the enigmatic Lawrence? It was the role that catapulted O’Toole to the stratosphere of global movie star.

O’Toole’s great gift allowed him to easily become another person on stage or film and when the work day was over, he could just as easily shed that alternate persona and become a normal person. In a (2011?) interview with TCM’s Robert Osborne, when asked for advice to young actors, O’Toole said the single most important tool an actor has is his or her voice. He said to master one’s voice above everything else. That it was the most neglected instrument of actors today. If you again enjoy his films, listen carefully to the way he uses his voice. It’s almost a supernatural power, yet it’s never out of place or overdone. Once on stage, he once played Macbeth with an intentionally wild, crazed voice (and gestures). The critics hated it, but audiences loved it. I think he rightly saw Macbeth as a flamboyant, effeminate, narcissistic clown ruled by his scheming, overbearing wife. O’Toole had fun acting and audiences felt it whether it was serious drama or comedy.

Nominated eight times for a Best Actor Oscar©, he never won. Early in his career, he said, “I will not be a common man because it is my right to be an uncommon man. I will stir the smooth sands of monotony.” And when it came time to retire – he knew he was no longer physically capable of performing or remembering his lines, he said: “It’s time for me to chuck in the sponge. To retire from films and stage. The heart for it has gone out of me. It won’t come back.”

Peter O’Toole claimed he achieved all he set out to do. When asked what he wanted for an epitaph, he told a story about sending a heavily stained buckskin jacket to a local dry cleaner. He said had the jacket had on it “every drop of tear, blood, sweat and whatever else from his long career.” Time passed and he assumed that was the last he’d see of his beloved jacket. After several years, he received a package with his jacket carefully wrapped in cellophane. Unwrapping it, he found a small hand-written note: “It distresses us to return work which isn’t perfect.” He remarked, “Oh what a perfect epitaph .”

When I had the chance, I regret that I never made an effort to take the time to meet the man I so admired. In the 1970s, I was scurrying, head down, along a sidewalk in Westwood, probably late for a meeting. I literally bumped into Peter O’Toole. I was so surprised when I looked up and recognized him that I – one of the few times in my life — was speechless. He had a long camel colored coat draped over his shoulders and he was trailing a cream-colored scarf wrapped around his neck and blowing in the breeze. He radiated a powerful charisma — more than anyone I have met. For me, Peter O’Toole was — and is — as good as one can get in the business of pretending for a living.

Thinking back about my favorite Peter O’Toole performances, ones that can be enjoyed again and again — isn’t that the true test? — the following films first come to mind. 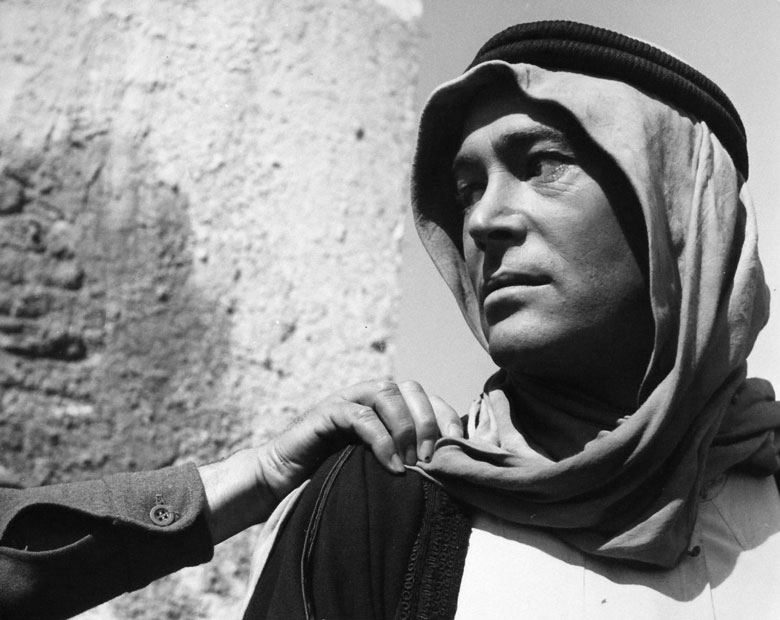 Many movie critics consider O’Toole’s performance as T.E. Lawrence the top ranked film performance of all time. It topped the 2006 list in Premiere Magazine’s “100 Greatest Performances of All Time.” Has there been anything since that even comes close? Not that I can think of. 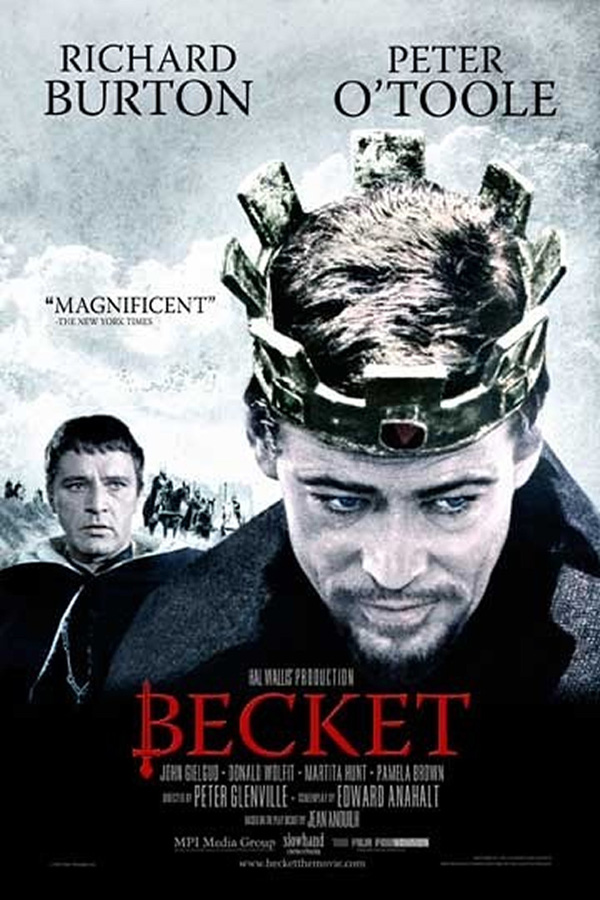 O’Toole played Henry II two times. Once in the LION IN WINTER and the other in this magnificent adaption of Jean Anouilh’s play “Becket or the Honor of God.” Richard Burton has the title role and the joy of this great film is listening to the exquisite words as said by the two true masters of spoken English. There’s nothing like it. O’Toole once said that there’s not a scene in which he and Burton were stone cold sober. Hard to believe, but maybe in some rare cases, alcohol in just the right amounts, is the perfect lubricant for fine-tuning a perfect performance. 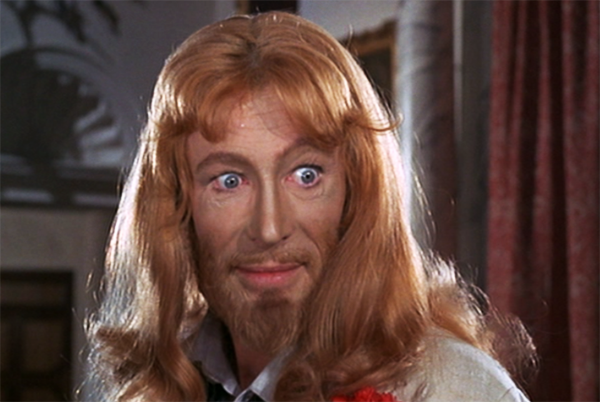 I love this vicious satire about the madness of class differences and especially the insanity of a certain faction of British society’s inbred powers-that-be. Based on Peter Barnes subversive play and directed by Peter Medak (who wrote the screenplay adaptation), Peter O’Toole is Jack, an institutionalized, full-blown but harmless schizophrenic who thinks — and pretty much behaves — as if he is the Second Coming of Jesus Christ. Naturally, his family seeks a cure for Jack now that he’s inherited the title of Earl from his father — who has unintentionally killed himself in a misguided attempt at auto-erotic asphyxiation. Do I need to say more? This irreverent opus features a tour-de-force performance from O’Toole. You will not forget the magnificently unsettling but perfectly logical ending. 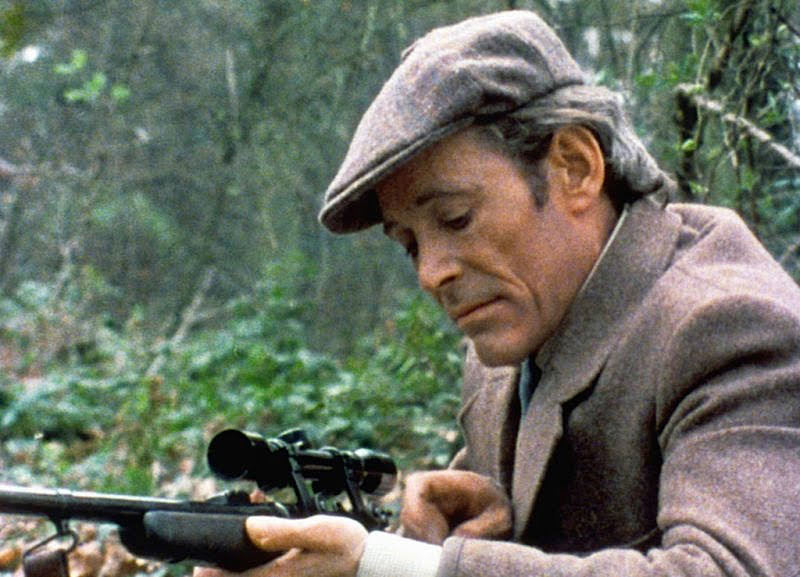 This British television production is a political thriller about a planned assassination of Adolf Hitler. O’Toole claimed it was his favorite movie role. The film was adapted from Geoffrey Household’s novel and directed by Clive Donner. You can find streaming sites for this terrific film. 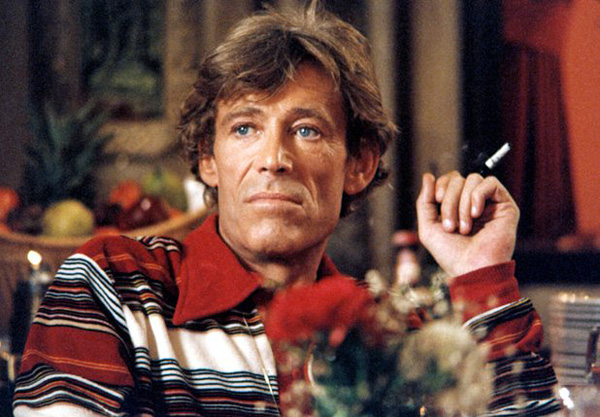 Richard Rush directed this sinister tale about a fugitive (Steve Railsback) who is hired as a stunt double by director Eli Cross (O’Toole) who loves to manipulate the increasingly dangerous real life that unfolds in front of his camera lens. Cross is an evil, god like character who will do anything to get what he wants on film. I wondered if O’Toole based his character on a director he knew or had worked with. Privately, I think Eli Cross is William Friedkin. 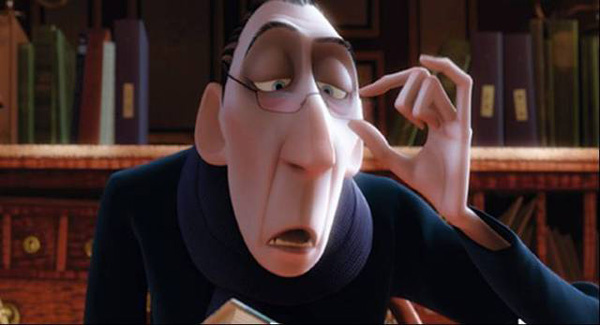 Without O’Toole’s indelible voice work, the few crucial, climactic words of gaunt food critic Anton Ego would have been far less than effective, in my opinion. It makes this wonderful movie exceptional. I actually got chills when I first heard it and am not ashamed to say I was on the verge of tears. It’s hard to explain exactly why, but O’Toole/Ego’s elegant, eloquent and informed words so sagaciously spoken (“Not everyone can become a great artist, but a great artist can come from anywhere.”) made real the notion that outrageous dreams can be realized — even if you’re a lowly rat with dreams of becoming a Parisian chef.