The tribute to Scott Hines “CELEBRATION OF LIFE” – at Temple Isaiah, in Palm Springs, Ca on March 5, 2015 was attended by over 600 people. Scott died tragically by suicide at age 45 — a victim of Bi-Polar Disorder. He will be missed forever by all those who knew & loved him.

Rebecca Pikus & Shana Rose designed 2 collages to show what a loving partner he was to Kevin Blessing, & a loving father to his adoptive children, daughter Sage & son Aden — and a great Public Servant. Scott Hines was a Councilman from 2010-2014, & the Mayor of Rancho Mirage in 2012-2013; He served many years in the U.S. Air Force; was active in the WEU (World Education University); Advocate for the Homeless & Abused Children, Gay Rights & LGBT; an Entrepreneur, Visionary, & Humanitarian — Scott was extremely intelligent, articulate, compassionate, adventurous, & had a great love of life & a great sense of humor to go along with it. Handsome, sophisticated & worldly — he had the makings of a future Congressman, Senator, — or even President. The world has lost a great human being! 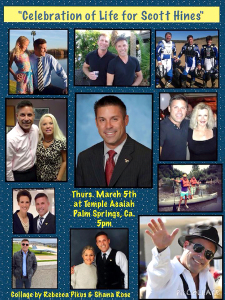