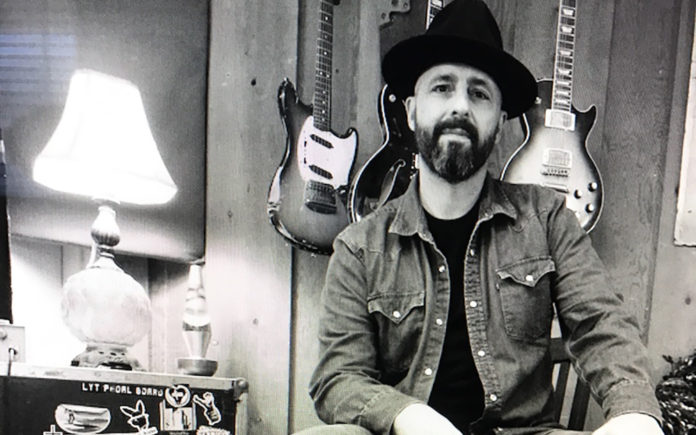 Since 2014 Coachella Valley resident and Americana singer-songwriter Rick Shelley has persevered through the sometimes merciless music business with pride and joy. His 2015 debut EP 1909 Miles and 2017’s full-length Hope Wrapped in Razor Wire, both produced by Chris Unck (Pink, Butch Walker, Black Roses) at High Lonesome recording studio in Joshua Tree, are a collection of sentimental American roots stories that represent the best of the dynamic genre known as Americana. Shelley will be performing his acoustic show as the opening act for Gethen Jenkins at the award-winning La Quinta Brewing Co. at 77917 Wildcat Drive in Palm Desert, California on Friday, December 7th from 7-9 p.m. Admission is FREE and this a FAMILY FRIENDLY EVENT! ALL AGES ARE WELCOME! CRAFT TACOS LIBRE will be cooking up some great food to pair with some of the best craft beer in Southern California. Coachella Valley Weekly dropped a line to Shelley to talk about his show with Jenkins, who he booked, the status of Country music in the desert and what’s next for him.

CVW: How did you come to book Gethen Jenkins?

SHELLEY: “My friend Danny McCloskey from The Alternate Root Magazine reached out and asked if I’d be interested in putting something together. I jumped at the opportunity. One, because I like Gethen’s music, and two, because it is how grass roots stuff works. Musicians should work to help each other. Gethen should be heard, he’s great! And if I can help introduce him to listeners here in the valley, I feel like that’s a good thing to do. I’ve had lots of help from others and I’m very grateful for it too.”

CVW: What has been the response to your music since the 2017 release of Hope Wrapped in Razor Wire?

SHELLEY: “The response has been good so far. The record has a great collection of songs. My song, ‘Dead Horse Hollow’, was an International Songwriting Competition Semi-Finalist in 2017 in the Americana category and ‘Highway 99 (Bakersfield)’ has been the country connection for me. Overall, I’m just proud of the record.”

CVW: Is there new Rick Shelley music on its way?

SHELLEY: “Yes! Recording will start soon and I am planning to release songs throughout 2019.”

CVW: Can you briefly explain your songwriting process.

SHELLEY: “Often times songs will just come from playing and practicing. I’ll sing whatever comes to mind and then chase down the idea.”

CVW: Who’s in your full band when you perform live?

SHELLEY: “When I have opportunities for full band shows, I play with ‘The Desert Dogs’. These are guys I record with; Chris Unck, Damian Lester, Tyler Saraca and Caleb Winn. They are top notch and I always look forward to those shows.”

CVW: How does it feel to be from the Coachella Valley?

SHELLEY: “Well, I am a Coachella valley transplant really. But I’ve lived here a really long time so… it’s fair to say I’m from here now. This valley and the High Desert, Joshua Tree and Yucca Valley, is filled with such great artists, musicians, painters, sculptors and writers. This place and its people are inspiring. I’m proud to call the Coachella Valley home.”

CVW: What’s next for Rick Shelley?

SHELLEY: “I’m looking forward to a release of some great video content in the beginning part of 2019, and to hitting the road as often as possible.”

CVW: What are your feelings about Country/Americana music in the Coachella Valley and High Desert?

SHELLEY: “Well, I feel like the High Desert has a little more of a lock on touring country acts in that some great bands roll through to play Pappy & Harriet’s. The place is a live music venue. it brings in more than just country too, it hosts all types of music. Artists from all over the country as well as artists from the deserts high and low. The Coachella Valley hasn’t done as much at a club/bar level. Bigger acts play the casinos and local groups play the bars. Hopefully that will change.”

CVW: With regards to the Stagecoach Country Music Festival, why do you think local artists are not as involved as they are in the Coachella Valley Music & Arts Festival?

SHELLEY: “I would say I’m not surprised that Goldenvoice hasn’t looked for local country acts to put on and perform. Festivals are looking for audience and draw. If I had 200K fans I might get asked to play or might get booked if I submitted for it. Other than that, I don’t figure Goldenvoice is gonna come looking. It’s the economics of music, the reality of it. But there is a lot going on around the festival. I think there are some missed opportunities to participate even if not on the festival grounds themselves.”

SHELLEY: “I think working together to put on good shows is about all we can do. I think most of us get so busy working on our own, that we forget to put something on the books that links us or Country/Americana music together once in a while. Something I plan to work hard at from now on.”

Join us in supporting Shelley and his effort to build a more secure Country/Americana music contingent in the Coachella Valley and High Desert. See you at the LQ Brewing Co. on Friday 12/7/18 at 7 p.m.!