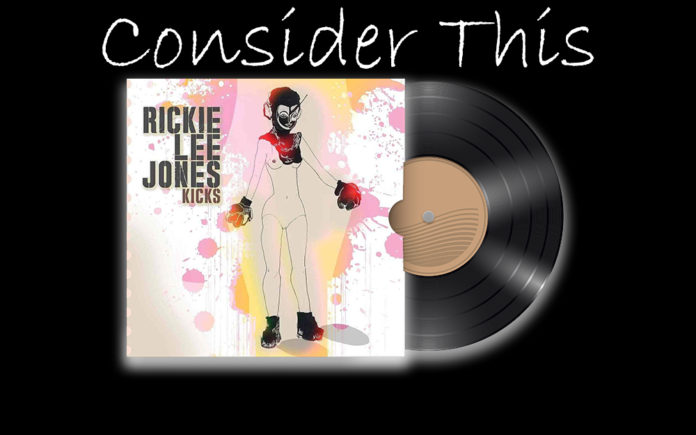 This Spring marked the 40th anniversary of Rickie Lee Jones’ self-titled debut. Ignoring the prevailing trends of Punk/New Wave and Disco, the flirty first single, “Chuck E.’s In Love” became the album’s calling card, but there was so much more to the record. Critically acclaimed and commercially successful, it shot up the charts, peaking at #3. Equal parts confessional singer-songwriter and Jazzy chanteuse, it felt as though she came out of nowhere. In reality, she’d been waiting her entire life to record her songs.

The third of four kids, Rickie Lee was Born in Chicago to Bettye and Richard Jones  in late 1954. Her family had a  showbiz background Her paternal grandparents, Myrtle and Peg-Leg Jones had been vaudevillians, and her dad was also a talented musician who worked odd jobs. The family relocated to Los Angeles, Phoenix, Arizona and finally, Olympia, Washington, but she had imaginary friends like Bashla And SlowBeeSlow to keep her company. Not long after her parents separated, Rickie Lee was in the wind.

Just before turning 18, she quit school and hitchhiked to California, determined to have a career in music. By the mid ‘70s, she’d made it to Venice. She earned her keep as a waitress and haunted open mic nights armed only with an acoustic guitar and a clutch of original songs. It was around this time she hooked up with Tom Waits. A kindred spirit, their shared influences included Beat poetry, Jazz, lavish Broadway musicals and the Beatles. They cut a boho swath, holing up at the infamous Tropicana Hotel, indulging in spirits and honing their symbiotic musical styles.

A turning point in her career came when she played the Troubadour’s “Hoot Night.” A demo tape of her songs began circulating (Emmylou Harris later recalled “it was the best thing (she had) ever received in the mail”). Lowell George, the eccentric front-man for Little Feat, recorded her song “Easy Money” on his solo album. That led to a deal with Warner Brothers, the most artist-friendly label in the industry.

Her debut not only catapulted her to the top of the charts, she appeared as the musical guest on “Saturday Night Live,” and magazine covers like Rolling Stone and Time. The latter proclaimed her “The Duchess Of Cool.” Headlining tours and four Grammy nominations followed (she won Best New Artist),

heady times for someone just turning 25. Her relationship with Tom Waits became a casualty of her success.

Retreating to New York City, she wrote and recorded her second album, nursed her heartbreak and developed a debilitating addiction. Pirates arrived in late 1981, and was cloaked in heartache and joy and featured a rogue’s gallery of unforgettable characters. Critics hailed it a masterpiece. Three years later, after she kicked some bad habits, Rickie Lee was married and living in France when she released her third long-player. The Magazine was dense and ambitious, but it contained a couple of pop gems, “The Real End” and “It Must Be Love.” Five more years elapsed and she was back in California with her husband, Pascal Nabet-Meyer, raising her daughter Charlotte Rose.

Collaborating with producer Walter Becker (half of Steely Dan), her next effort, Flying Cowboys was a stunning return to form. Awash in Western themes, the moods shifted from celebratory to introspective and playfully affectionate. The album was embraced by fans and critics alike, returning Rickie Lee to the Top 40, and landing on myriad Top 10 lists.

A cutting and sublime writer, Rickie Lee has never been very prolific, she doesn’t like to characterize it as writer’s block, but sometimes inspiration has been elusive. So in between adroit original efforts like Traffic In Paradise (1993), Ghostyhead (1997), Evening Of My Best Day (2003), Sermon On Exposition Blvd (2007), Balm In Gilead (2009) and The Other Side Of Desire (2015) she has made a practice of recording songs that have influenced her through the years.

Pop Pop arrived in 1991 and pivoted from Jazz standards and Broadway hits to radically re-arranged Rock classics from Jefferson Airplane and Jimi Hendrix. She returned to the well in 2000 on the It’s Like This album. This time she tackled notable songs by Marvin Gaye, George Gershwin, Traffic, Lerner & Lowe and the Beatles. 12 years later, “The Devil You Know” found her putting her imprimatur on vintage Rock from The Stones, Donovan and Neil Young, obscure cuts from Van Morrison and Brewer & Shipley and standards like “St. James Infirmary.” Her new album Kicks, continues the tradition.

The album unfurls slowly with a withering take on Bad Company’s signature song, unironically entitled “Bad Company.” The 1974 hit conjured up gunslingers, rebels and outlaw imagery. Rickie Lee takes it a step further, her arrangement drafts off the original, as well as Argentinian composer Gustavo Santaolalla’s prickly instrumental, “Iguazu.” Bristling acoustic guitars, burnished bass lines and hushed percussion contribute to the song’s inherent menace. Vocals are slippery and shadowy, brushing against an off-kilter conga beat and skittering electric guitar that kicks up the dust. The threat is implicit when she warns “Don’t turn your back on me…” as the song fades out with a shimmery coda.

Even when she’s covering songs by Rock N’ Roll stalwarts, she manages to subvert expectations. Tackling tracks by America, Steve Miller Band and Elton John, one would assume she’d swing for the fences interpreting classic cuts like “A Horse With No Name,” “Fly Like An Eagle and “Crocodile Rock” (if only to conform to the weird animal song symmetry). But Rickie Lee, being Rickie Lee, digs a little deeper.

“Lonely People” was hit for America 45 years ago. While the lyrics, equally melancholy and hopeful, built off the Beatles “Eleanor Rigby,” the melody and instrumentation felt deceptively breezy. Rickie Lee retains the waltz flavor but injects more pathos. A thumpy beat connects with wistful guitar chords, spatial keys and wily pedal steel. Her optimism shines through as she dedicates the song to “All the lonely people, thinking that life has passed you by.”

Her take on Steve Miller’s “Quicksilver Girl” is suitably Psychedelic. Powered by blurry keys, phased guitar, fuzzy percussion and slightly slurred vocals, the vibe is hushed and reverent. Even though this song is over 50 years old, the lyrics feel like a tribute to the Duchess Of Cool Herself, her ephemeral charms on full display; “If you need a Little lovin’ she’ll turn on the heat, if you take a fall, she’ll put you back on your feet/If you’re all alone she’s someone to meet, If you need someone.”

Finally, “My Father’s Gun” harkens back to Elton’s earliest days, when the future Captain Fantastic was still perfecting his songwriting partnership with Bernie Taupin. It arrives halfway through his first acknowledged masterpiece, Tumbleweed Connection. The Gospel-inflected ballad tells the story of a son burying his Confederate soldier father and taking up his weapon to rejoin the fight. Rickie Lee’s version is bare-bones and spectral, featuring rippling acoustic arpeggios, agile vibraphone, muted keys and a stealthy rhythm. Her shape-shifter vocals remain circumspect on the verse, but emit a full-throated wail on the chorus. It’s tempting to think this plainspoken elegy serves as a restless farewell to her father. Although he buried his musical ambitions out of necessity, she picked up the artistic gauntlet.

Rickie Lee received a musical education at her father’s knee, absorbing a variety of songs from the first half of the 20th Century. So, it’s no surprise that she continues to look to Tin Pan Alley and the music of Kurt Weil for inspiration. First up, is a spirited read of “Nagasaki.” Originally written in the ‘20s, it has been recorded by Benny Goodman, Django Reinhardt, Louis Jordan and Chet Atkins. It’s something of an exotic novelty song, not unlike “Rum And Coca Cola.”

Buoyed by a rat-a-tat-tat rhythm, swinging clarinet and syncopated vibraphone, Rickie Lee conveys a childlike delight swiveling through whimsical lyrics like “Hot ginger and dynamite, there’s nothing but that at night/Back in Nagasaki where the fellas chew tobacky and the women wiki-wacky-woo.” Her enthusiasm is infectious. It’s clear that songs like this informed the finger-poppin’ cool of her own classic, “Danny’s All-Star Joint.”

“Mack The Knife” originally appeared in “The Threepenny Opera,” from composer Kurt Weill and playwright Bertolt Brecht. Although its origins are traced back to a traditional murder ballad, Swingin’ versions from Louis Armstrong and Bobby Darin are best known today. Rickie Lee dials back the Ring-A-Ding-Ding, relying on thrumming stand-up bass, muted keys, junk drum percussion and liquid electric guitar riffs. The song turns a corner, accelerating slightly and locking into a second-line groove, as the vocals glide over the calibrated chaos.

Back-to-back, Rickie Lee offers up tender renditions of a couple of Dean Martin classics, “Houston” and “You’re Nobody Til Somebody Loves You.” The former, is a Countrified charmer, written by singer-songwriter/producer, Lee Hazlewood that the laconic crooner took to #21 in 1965. Walking bass lines, swirly pedal steel and a finger-snapping rhythm leaven sad-sack lyrics like “I found a dollar yesterday, but the wind blew it away.” A rumbly guitar solo twitches and twangs, connecting with a sly conga beat On the break.

The latter, one of Dino’s signature songs, was written back in the ‘40s. Here, Rickie Lee lags slightly behind the beat, her vocals stacked to create the illusion of a modern day Andrews Sisters. It’s sultry Supper Club Jazz, accented by Slinky bass lines, cascading electric guitar, lush keys and twinkling Vibes.

Curiously, the only female-centric song here is a woozy, but relatively faithful version of “The End Of The World,” a track originally made famous by Country/Pop chanteuse, Skeeter Davis. Propelled by a tick-tock beat and shadowy horn section, it shares some musical DNA with Percy Sledge’s “When A Man Loves A Woman.”

The album closes with “Cry.” A wildly melodramatic #1 hit from Johnny Ray back in 1951. Rickie Lee jettisons the lachrymose gloom, stripping away the pomp and circumstance, concentrating the arrangement on acoustic guitar and swoopy pedal steel. The unmistakable ache in her voice, coupled with the spare instrumentation, succeeds in crafting a high lonesome torch song.

Rickie Lee doesn’t really interpret other people’s songs, she re-interprets, recalibrates and reconfigures music that speaks to her, rendering it a deeply felt and personal experience. That’s her gift. This album mirrors the musical education she began with her father, effortlessly blending genres and blurring boundaries. 40 years on, she remains a sui generis talent, who isn’t afraid to color outside the lines.