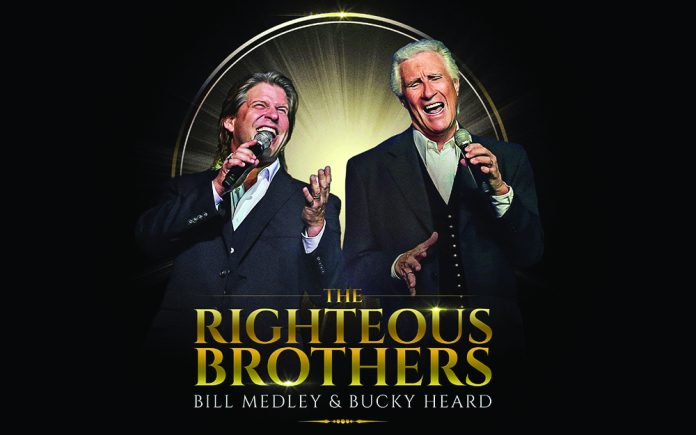 When I call Bill Medley, founding member of the Righteous Brothers and inventor of blue-eyed soul, at his Newport Beach home, I point out that this is my third time interviewing him and we are practically old friends at this point. He generously tells me we are old friends and I promise not to ask him anything I’ve already asked him before.

For the second year in a row, the Righteous Brothers are playing at Fantasy Springs, conspicuously close to Valentine’s Day (last year right on it), so I ask Bill if he thinks they book them that way on purpose, so men can take their ladies to the show and he (and bandmate Bucky Heard) can sing all the romantic things to them that their boyfriends couldn’t come up with themselves. He chuckles and tells me how much he loves the desert, so he’s not sure if that’s the case but he’s always happy to be back here. And, he mentions, “Unchained Melody” probably makes them a good fit for a belated Valentine’s show. Speaking of “Unchained Melody,” I tell him I read an article Pandora put out the day prior that ranked the top 10 love songs with the criteria that “undying love is professed”. It lists some of the heaviest hitters: Etta James, Celine Dion, Lionel Richie…and “Unchained Melody” is number one. I point out what a unique honor for him that when people think of the best love song, it’s one of his hits. “Yeah, that’s amazingly cool. I didn’t know that,” he tells me. “We’re very proud of that song. And “Lovin’ Feeling” is the most played record in the history of American radio. Both Bobby and I felt it was so great that that’s how people are experiencing our music. For these songs to live 50-some years, wow.”

I ask him if he knew when he first recorded this song that it was going to be this special, and he says, “I produced the song (because I produced all the albums, even the ones with Phil Spector). Bobby would do a solo and I’d do a solo. I asked Bobby what he’d like to do and he said “Unchained Melody”. People always loved this song when we played it live and we were big fans of Roy Hamilton (who originally sang this song in 1955). When Phil [Spector] would release one of our songs he thought was going to be a hit, he would always put on the B-side a song that was so bad, they wouldn’t play it. He put “Unchained Melody” on a B-side! He called radio stations and told them to stop playing it, but it just took off and was a good sized hit in the 60s. It’s truly interesting how much power TV and movies have. Ghost made it a monster in 1990.”

Having performed now for over five decades, I ask if there’s been an evolution of how he feels once he’s on the stage performing and if his excitement and love for it has changed over the years. Bill tells me, “Yeah, I don’t think it’s ever changed. I love to perform. That’s what I feel I am. I do a little of everything, but in reality I’m a performer and I’m never scared unless I’m singing at the Grammys – and then I’m petrified. To go on stage and I know they’re here to hear my songs, I get excited. Literally, when the curtain goes up, I feel 25 again.” I tell him maybe music keeps people young, because Tony Bennett is 93 and still going as strong as ever. “Music absolutely keeps people young!” says Medley. “I’ve been asked a lot how I do it or why I do it. I’m a one trick pony. If I’m not singing or performing on stage, I’m sitting on a couch waiting for them to put a sheet over my head. Just keep doing what you love to do! Don’t stop. Find a hobby and do what you love to do and you will not grow old. My advice to kids: you’ve got to believe in magic. You’ve got to believe in your dream and if your heart is telling you go do it then go do it. You can’t be in our business to make money or to pardon my French, get laid. Maybe that comes with the territory but it can’t be why you’re doing it because the audience will recognize that. So just follow your dream and do your best not to get your life so confusing that you can’t keep following it. You have to be careful to not let things get in the way.”

Don’t let anything get in YOUR way of seeing the Righteous Brothers this Saturday, February 28 at Fantasy Springs. Show starts at 8 pm and you can purchase your tickets here: https://www.fantasyspringsresort.com/entertainment/