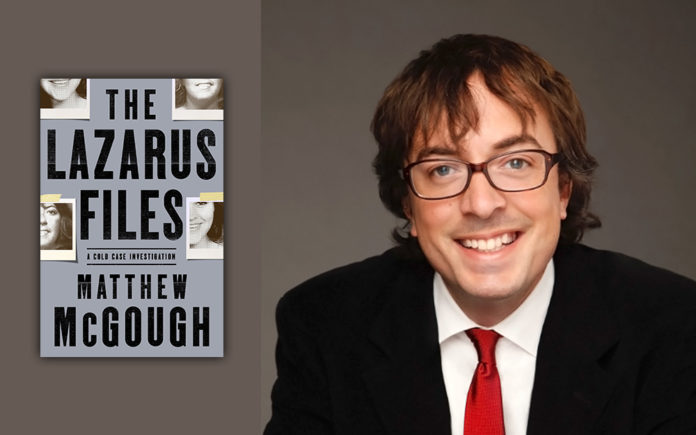 Bad things happen to good people.  But, when it’s murder, it is unfathomable that someone who has dedicated one’s life to serving others could be randomly and brutally murdered. In Matthew McGough’s The Lazarus Files: A Cold Case Investigation (Henry Holt and Company, 595 pages), a family seeks answers from the LA police department in hopes to catch their daughter’s killer.

Author McGough delves into the 1986 cold case murder investigation to reveal how after 23 years an LAPD officer was caught and convicted.

Sherri Rasmussen was a bright and vivacious young woman who graduated high school early and went on to become a nurse.  After nursing school, she pursued graduate level nursing at UCLA and finished her master’s degree with honors.   She possessed leadership skills and became a director of nurses at UCLA’s medical center.  With a desire to make more of an impact, she left for a smaller hospital in Glendale where she was well liked and respected.

A friend introduced Rasmussen to John Ruetten and they quickly fell in love.  Unbeknownst to Rasmussen, Ruettten had an ongoing relationship with LAPD officer Stephanie Lazarus.  They had known each other since college.  But after Rasmussen came into Ruetten’s life, he saw less of Lazarus.

In Ruetten’s mind, he and Lazarus were never a couple.  But that was not true for Lazarus.  After hearing about John’s engagement to Rasmussen, she confessed to John’s mother she was in love with him.

Three months after Rasmussen and Ruetten were married, Rasmussen was found murdered in the condo she shared with her husband.  Evidence points to a raging, bloody fight that Rasmussen did not win.

When the police investigated, they quickly decided it was a burglary gone wrong.  They believed Rasmussen was killed when she interrupted the thieves.

Rasmussen was beaten, shot three times and bitten on the inside of her arm.

Rasmussen’s parents insisted the police follow up on John’s ex girlfriend who had threatened their daughter at work.  They continually asked if they had ruled out Stephanie Lazarus as a prime suspect.  They police did not respond.

In 2005, LAPD Detective Jim Nuttall came across the cold case Lazarus files, which were mysteriously left at his desk.  He was a kid when the murder was in the news.  Now he had potential DNA as a tool and with the help of a few quality and trusted LAPD cops he could track down the killer.  But, arresting an LAPD officer for first-degree murder would take another three years of careful planning.

The Lazarus Files is a captivating read.  At times it is so thrilling, I was scared, anxious and angry.  The book is dense and detailed and filled with police procedure.  McGough does an incredible job recounting the time period and exposing the main characters who all play a part however small in the tragedy.

In 1986 Los Angeles, there were 831 murders of which 28 were in Van Nuys where Rasmussen lived.  Twenty-three were solved.   When Nuttall examined the Rasmussen file, he determined that she was a “Righteous victim” – someone who did not put herself directly in harms way.  As he evaluated the case, the bite mark stood out as a way to narrow the suspects.  With careful evaluation, the detective was able to sort through the file, conduct interviews and find Lazarus.

There are some gaps in this book and at times the information was redundant, but ultimately, McGough delivers an intensive narration on the case of Sherri Rasmussen in a way that allows the reader to engage with the family members, the evidence and the outrage of the horrific crime.

Rasmussen’s husband, John Ruetten, was the catalyst for the murder.  He was weak and unable or unwilling to call off the relationship with Lazarus — and had sex with her after his engagement to Rasmussen.  Finally, in the end, 23 years later, Ruetten takes responsibility for his actions with Lazarus.

Part of my deep captivation with the book is I lived in LA at the time of the murder.  I had a friend who worked with Rasmussen and friends who lived in a similar condo on the same block.  It’s shocking to realize how dangerous that period of time was in LA.

McGough is careful as he writes about the LAPD, letting the mountain of “evidence” (and the loss of evidence) along with the procedures and police culture speak for itself.  Intentional or not, the author makes a case that if the LAPD were not deliberately covering up, it was either incompetence or perhaps Lazarus herself who somehow destroyed, removed or tampered with evidence.

There is a quote in The Lazarus Files by Reverend Arthur Torres who officiated a funeral of an elderly couple who were members of his Glendale church that were horrifically murdered by the “Night Stalker” the same year Rasmussen was killed.

Torres said: “To try and give a rational explanation for an irrational act is to legitimize it.”  For me, this is the profound theme of the book.