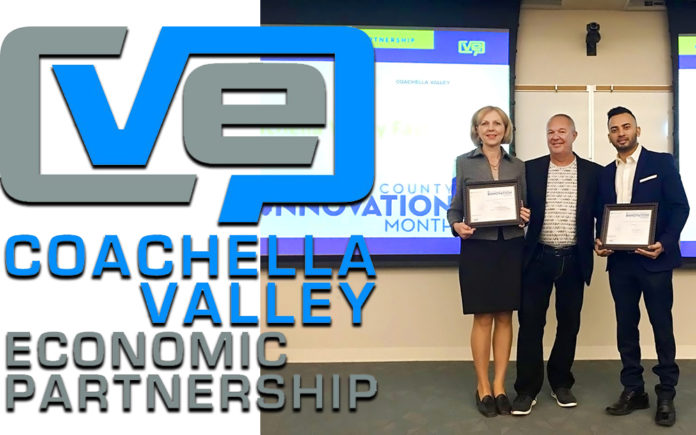 April is Riverside County Innovation Month.  The County as well as many cities throughout the region wanted to bring heightened awareness to the daily efforts of our local entrepreneurs and innovators – the people responsible for most job growth.

As part of this, there regional competitions are going on this month where new businesses pitch their businesses to panels consisting of entrepreneurs and financiers.

Five entrepreneurs presented their business plans with two chosen for the finals on April 26th in Riverside at the UCR ARTSBlock.

First up was Elizabeth Wong, founder of Double-Lock Healthcare Systems.  Having been a nurse for forty years, Ms. Wong wanted to reduce the secondary infections that can happen when a patient is brought in critically injured or ill.  Her invention is a 100% sterile entry intravenous (IV) port and syringe system.  This invention is important in that there is no easy way to keep the IV completely sterile and bacteria free when working on critical care patients where life and death can sometimes be measured in seconds.  Her solution is a double entry system that keeps 99.99% of all bacteria and other contaminants out of the patient’s blood stream.

Second up was Stewart Lowinger, founder of the Music Database Network (www.musicdbn.com).  His goal is to create a ‘one-stop music network’ similar to what IMDB.com does for those working in the film and television businesses.

Third was a project from the University of Redlands.  For a number of years, students have been working on a self-filtering portable shower system.  What makes their system unique is that it uses low amounts of water to clean people where that used water is collected, purified so that 99.99% of contaminants are removed and reused for additional showers.  Renewable energy via solar panels is used to power the water purification process while heating the water.  This shower system is critically needed in areas suffering from extreme water shortages like South Africa, refugee camps, areas of high homelessness like Los Angeles and campground settings.

Fourth was Janina Soto and LuxBodega (www.LuxBodega.com).  From El Centro, she and her husband started a high-end shoe rental business where uses can rent women’s shoes that would normally sell for thousands of dollars for less than one-tenth of the purchase price.  While this might not make sense to many men, any woman who has gone out for a special evening and wanted to wear equally special shoes knows the value of a one-time wear service like LuxBodega.

Last but not least was Shawn Isaac and Deal Drive.  You may know Shawn from his appearances on MTVs “True Life” or his time working at Graphtek as a vice president of operations.  Deal Drive is a tablet computer that straps to the back of an Uber or Lyft driver’s seat that shares ads with passengers.  In return for adding Deal Drive to their cars, independent Uber and Lyft drivers get paid a few hundred dollars a month.  Given that many drivers earn less than minimum wage from their taxiing efforts, Deal Drive is a way for drivers to make closer to a living wage while targeting passengers with ads customized to their unique interests.

While all five entrepreneurs have great ideas, Elizabeth Wong and Shawn Isaac were chosen to represent our side of Riverside County.

For more information on this month’s competition and schedule, visit www.rivcoinnovation.org.

Haddon Libby is the Founder of Winslow Drake Investment Management and can be reached at 760.449.6349 or HLibby@WinslowDrake.com.  For more information on the company, please visit www.WinslowDrake.com.  Only 6% of all Investment Advisors are Fiduciary Advisors like Haddon Libby.  Fiduciary Advisors must put your interests first whereas Broker Advisors can put their firms interests ahead of yours.