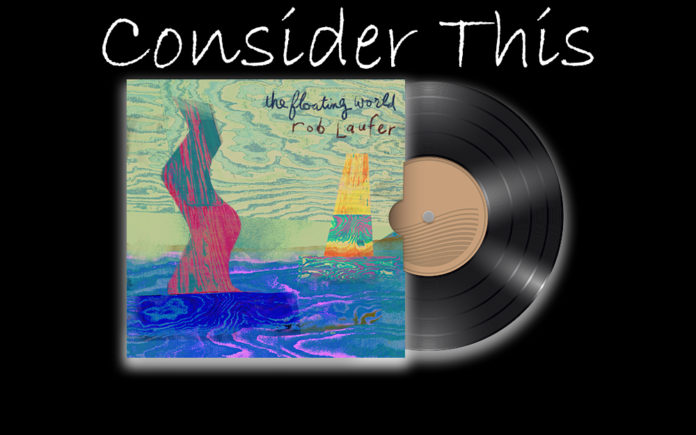 It’s been nearly 10 years since Rob Laufer released his last album, but the L.A. native hasn’t been idle. A go-to guy in the music industry for decades, lately he has sidelined his own career in order to assist other artists in bringing their musical visions to fruition.

Rob grew up in Tarzana, which is technically part of L.A. proper, but actually, it’s nestled deep in the San Fernando Valley. The site of author Edgar Rice Burroughs former ranch, it is named for his iconic character, Tarzan. By the middle of the 20th century, it was a small, bedroom community. Rob has noted his earliest musical inspiration came from his mother, quietly singing in Yiddish as she washed the dishes.

Although his family wasn’t particularly musical, Rob started piano lessons at age six, and picked up the guitar a year later. Around the house he created primitive drum kits out of plastic waste paper baskets, Quaker Oats boxes;  essentially using whatever was available.

Pretty soon he had mastered guitar, piano and drums, and was becoming proficient on upright bass. He sped through a series of bands through high school and college with names like Wells Drive, Rob Laufer and The Prime Ministers, Max Hitchcock and The Hi Fives and Big Branch.

Once he finished college, he began pursuing a music career full-time. One of his earliest gigs was as part of the Los Angeles cast of “Beatlemania,” (he played George). By the early ‘90s, he had become a fixture on the L.A. music scene and secured a record deal. His debut, Swimming Lessons arrived in 1993. Two years later he returned with Wonderwood. He cultivated a loyal fan base, and was featured on Triple A (Adult Album Alternative) radio stations like KSCA, as well as the taste-making KCRW. The critics were paying attention, praising the rich melodicism threading through his introspective Folk-Pop. Pretty quickly, music supervisors also began taking notice.

Accordingly, his music was heard in commercials as well as TV series like “Melrose Place,” “Felicity” and “Scrubs.” They also appeared in films like “Baby Mama” and “In The Land Of Milk And Honey.” Concurrently, Rob became an in-demand session player, popping up on recordings by Fiona Apple, Frank Black from the Pixies, Melissa Ferrick and the band Ok Go. When Cheap Trick front-man, Robin Zander released his solo debut in 1993, Rob’s song “Reactionary Girl” was the lead-off track.

His “Beatlemania” experience reaped unexpected dividends at the turn of the 20th century, when Beatles producer George Martin was putting together an orchestral concert at the Hollywood Bowl. The historic event featured members of The Bangles, The Police, Peter Case, Brad Delp from Boston and Adam Duritz from Counting Crows. Sir George tapped Rob to sing two songs, “For No One” and “A Day In The Life.”

A few years later, he was invited to perform similar duties when Cheap Trick teamed up with the Hollywood Bowl Orchestra to celebrate the 40th anniversary of Sgt. Pepper. More than just a one-off performance, Rob played several live dates with them, in fact the New York show was released on DVD. Fast-forward to 2010, the Bowl curated another Beatles themed program featuring Patti Austin, Bettye LaVette, and Todd Rundgren. Once again, Rob was included in the line-up and got the chance to perform “Let It Be,” with Todd, his longtime musical hero.

Back in the early ‘90s he made another long-lasting musical affiliation with the Wild Honey organization. A musical charity whose proceeds go to an Autism think tank, as well as a plethora of good causes, started with a tribute to Beach Boy genius Brian Wilson in 1994. Recently, they have become known for their ambitious, yet deferential tribute concerts saluting the Band, Buffalo Springfield and the Kinks. For the last few years, Rob has served as musical director for an ad hoc orchestra that usually features the cream of Los Angeles’ music community.

Although he has sporadically released his own albums, The Iron Age in 2006, Excruciating Bliss three years later and The Orange EP in 2010, Rob’s music has taken a backseat to an array of commitments. But somehow, in the last few months he found time to record his fifth long-player, The Floating World.

The album opens tentatively with “Avalanche.” Braided acoustic guitar makes way for plaintive pedal steel, sidewinding bass lines and a kick drum beat, all the while, plunky piano notes advance and retreat. The melody shares some musical DNA with the Beatles’ epochal “In My Life.” Opaque lyrics like “The best of intentions and worlds are destroyed with a sidelong glance,” are shaded with longing and regret. A honeyed guitar solo offers on the instrumental break offers a bit of a respite.

Both “Bolt Of Blue” and “Space + Time” are a couple of stripped-down rockers. The former is powered by strummy guitars, shimmering keys, a rollicking back beat and a honking horn section. The arrangement strikes the perfect balance between exuberance and menace, even as lyrics add a healthy dose of narcissism; “Suit yourself instead of others, you’ve been kowtowing too long, you’d please your friends, sisters and brothers, even when you know it’s wrong.”

The latter is anchored by growling guitar riffs, tensile bass and a kinetic rhythm. Keening violin and cello emphasize Rob’s anxious ennui; “Don’t be afraid to come alive, nothing will leave you satisfied, all over the world they’re saying just give me one good ride.” The arrangement revs on the break as careening guitars stutter and pinwheel, becoming positively modal.

Three songs are opulent and cinematic in all the right ways. “The Holding Sea” wraps chunky guitar, shivery synths and stealthy keys around a syncopated groove. Lyrics wax rhapsodic about a place “where cedars held the sky and quatrains wander free.” Lush and languid, the break features sinewy electric guitar cresting over courtly acoustic arpeggios.

On the title track, plangent piano folds into nimble acoustic guitar and a tick-tock beat. Baroque and beatific, there’s an elusive eloquence to this seaside serenade. to paraphrase Sam Cooke, it just kinda just sends you.

Finally, “This River” is accented by shang-a-lang acoustic guitar, ricochet bass, meandering piano and a Snap-back beat. The melody feels like a cosmic cousin to the Byrds’ “Ballad Of Easy Rider,” and Cat Stevens’ “How Can I Tell You.” Rob’s tender croon is world weary, as he searches for some emotional rescue; “It was not enough to leave well enough alone, to walk away and say it was good and now I’m okay/Oh of course it was enough, it was like a dream discovering that yearning could be matched and more, to hear the canyons open and roar, of course it was like a dream.”

This album is packed with indelible melodies and inventive arrangements, but the standout track is “Highway Machine.” A minor key masterpiece in ¾ time, it features jangly guitar, lowing cello, lonesome pedal steel, lyrical violin and a heartbreak beat sparkling piano chords underscore Rob’s melancholy mien. As the melody soars, he plots an escape from life’s banalities; “You don’t have to walk that thin grey line, rise at dawn when all roads are blazing, and morning seems to read your mind/Highway machine, we’ll let go expectation, ride away with me, we’ll fly in-between.” Fluttery Spanish guitar swirls around cascading piano notes on the break, adding a pastoral patina. When it shimmers to a close, the listener is destined to hit “repeat.”

Other interesting tracks include the Folk-flavored “As Long As You Belong” and “Fence,” a bucolic torch song that veers into Bacharach country. The album closes with “Hippie Love.” While it seems perfectly timed for the wave of flower-child nostalgia washing over the country, (The media seems intent on commemorating every aspect of the 50th anniversaries of the Moon landing, the Manson Murders and Woodstock), it’s doubtful that is Rob’s intention.

A stompy back-porch ramble, it paints a vivid portrait of a “teenage acidhead…awash in a wave of consciousness, his sense of freedom was soaring.” He connects with a soul mate, urging her to “Come away with me, paradise is just around the bend, we’ll hide from the man, we won’t have a plan, our hippie love is like the wind.” It’s a sweet story, unclouded by cynicism, even as the smell of “grass and patchouli fills the air.”

A confluence of events conspired to create this album that included a re-introduction to the music of Bon Iver and a deep-dive into the voluminous back catalog of the Late, Great Tom Petty. Rob felt inspired by the latter’s easy-going song craft, which, in turn, motivated him to try and not over-think things. That proved to be a sharp strategy.

The Floating World is one of those kinds of perfect albums that takes up residence on the stereo and never leaves. The record is by turns, graceful, playful and sincere. As a singer-songwriter, Rob Laufer occupies the same sort of rarified air-space as Peter Case, Freedy Johnston And Michael Penn.

Although it’s a sure bet that he will continue to lend a hand on other artist’s projects, as well as conjure up some musical magic as he puts the Wild Honey orchestra through it’s paces, hopefully he’ll carve out some time to create his own music. He has been missed.