Mournfully, there are some people in this world who are not here to help us discern the splendor in life. And then there are people positioned in our path who are assembled in place to help guide us; Robbi Robb embodies the latter for many in humanity.

The combination of Dug Pinnick (KING’S X) on bass and vocals, Robbi Robb (TRIBE AFTER TRIBE) on guitar, Mike Hansen (STEVE VAI) on drums and Amritakripa on keyboards compose the evolving 3RD EAR EXPERIENCE. The voyeuristic jam band will be performing on Wednesday, August 7th at The Viper Room in West Hollywood, California with SIFTING and WHEELS OF CONFUSION, Thursday, August 8th at Brick By Brick in San Diego, CA and Saturday, August 10th at The Hood Bar & Pizza in Palm Desert, CA.

As guitarist and vocalist for TRIBE AFTER TRIBE, Robb and band perfected their unique blend of African Acid Rock, opened for PEARL JAM on three consecutive tours and were hailed by Billboard Magazine as “the pioneers of World Rock”. Robb eventually moved to California’s Mojave Desert to “shed his skin”.

Robb and Pinnick were Megaforce Records labelmates when they first met. Pinnick was drawn to Robb’s psychedelic-tribal explorations and Robb to Pinnick’s sheer power and groove. In 2013, Pinnick collaborated with Robb to record the first 3rd EAR EXPERIENCE album, Peacock Black, three days of free-form jams comprised of four extended tracks. The album is a spiritualistic plunge into the depths of musical spontaneity. Shortly after, the Space Rock band released the album, Boi, this time featuring eight tunes with a more common song structure. The band attracted favorable press internationally and opened for Swedish Stoner Rock band TRUCKFIGHTERS on their 2013 U.S. tour. Recorded with a modified line-up, their next album, Incredible Good Fortune, was released in 2014, consisting of new and extended explorations.

2015 Saw the band touring Europe, opening for Fatso Jetsun, My Sleeping Karma and Glowsun where they got to play numerous stoner rock festivals including Desert Fest and Keep it Low.

From the get-go, it’s perfectly clear that these transcendent musicians are at the top of their game; rebellious and unafraid. Wasting no time, their music bursts into dense and dazzling jams, drawing the listener into a pulsating, rhythmic foundation with no edges to hold to. Motifs are hurled from one instrument to the next, cleaving idea to idea, moment to moment, exploding with life and outrageous creativity. It is free, unfettered and uncontainable music.

At times being courageously experimental, they abandon formal arrangements and allow the music to flow in a cosmic-sonic dialogue between fellow musicians and stargazers.

I spoke with my friend for a cosmic and concise conversation about 3RD EAR EXPERIENCE. Like the 3rd eye, the 3rd ear is equivalent to a mythical and profound concept. It refers to an intellectual and undisclosed ear which provides auditory range beyond ordinary hearing. THAT is the 3RD EAR EXPERIENCE and these are the outside limits of Robbi Robb.

CVW: How would you describe where 3RD EAR EXPERIENCE is now musically and spirituality?

Robb: “In sex magic one learns to hold off an orgasm for as long as possible while making love – after a while, different psychic centers open up in the lover and a deeper orgasmic experience of the whole universe implodes within the lovers as they finally surrender – It’s a divine erotic experience. Similarly with this music, at first we are like astronauts stepping into the Apollo with no guarantee that this is all going to go well – and yet like our lovers, after the first few minutes of searching and listening and touching gently and finding sweet spots, different psychic centers start opening up and an influx of musical ideas pours in; we have a lift-off. Breathtaking. Like the Apollo rising into the sky, like the orgasm that destroys the egoic mind. So, in a way, the music we play is like our own spiritual path; as long as we take time to listen and feel each other and play respectfully – then the music guides us to special ‘once in a lifetime’ places. – but never forget, – it is first and foremost rock music – so one should expect a lot of mayhem and chaos too (laughs).”

CVW: Tell us about the current members of 3RD EAR EXPERIENCE. What does each member bring to the feast? 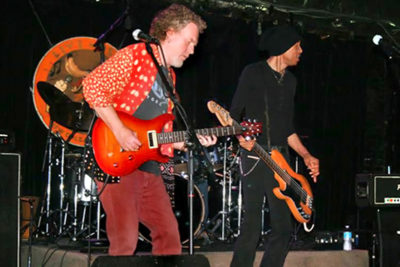 Robb: “Yes we are not a ‘band’ – we are a ‘Feast of Friends’ – if you’re a friend of ours, yer in, but to use our youngest member for an example – Jorge ‘Bassman’ Carrillo – when I met Jorge, he was a player with great feel and groove, but hadn’t developed the ear and technique to fly off into the unknown. He has over the years been getting deeper and deeper into his playing and as he grows deeper, he forces us all into the unknown of our own abilities and so the music gets deeper. And it’s the same with the drummers, whom we expect to improvise and take solos, often at the same time the bass and the guitars are, but to never lose sight of ground control, the ‘one drop’ like the great jazz drummers. For Kripa and Dug it’s the same thing, both of them truly enjoy being pushed off the cliff edge of all they are secure with and to discover their wings and fly without a song structure, a compass or GPS! And Amritakripa is the high priestess of Space Rock and Dug is King! I think what each member brings to the feast is genuine ‘trust’ – we trust each other completely.”

CVW: 3rd Ear Experience has performed around the world. What are the most usual commonalities between 3rd Ear fans?

Robb: “I see a concentrated mindfulness – the focus in their eyes and the easy smile. There’s no sticking out of tongues and giving the middle finger or dudes devils horns….none of that – our audience listens well and gets swept up and away with us, and they seem to feel the things we are feeling – when we resolve an uncomfortable moment they cheer us on, when we achieve a great height they cheer us on and then when we end a jam there is often a moment of silence before the applause. That moment of silence, to me, is the highest compliment.”

CVW: You are blessed with the most unusual amount of humility than any other musician I have ever encountered. With your significant history in rock music history you seem to live a modest life in the High Desert. How conscious are you of your disposition? Is it more nature or nurture?

Robb: “Oh Hell; I once met a great sorcerer who tore the veil of physical life from my eyes for a few seconds – I am not humble, I am nothing more than a Pachuco bewitched by infinite space! But one thing about the community I live in – it is not modest by any means, it is opulent, it is voluptuous, it is seething with a vital mind – you see, we have, in this small radius of our greater desert village, hundreds of wonderful artists, a street lined with art galleries, we have Eva Soltes at the Harrison House Music, Arts & Ecology bring us Butoh & Bharatanatyam dancers and a Gamelan (Indonesian percussive instruments) orchestra, we have cutting edge musicians, we have activists, food growers, astronomers, filmmakers, chefs, dancers, healers, poets, entrepreneurs and mad hatters. All in this small little area – it’s a condensed magic town. And at the same time there is the desert solitude so mystical with its night sky so clear with infinite stars – I could never explain. All of this nurtures me.”