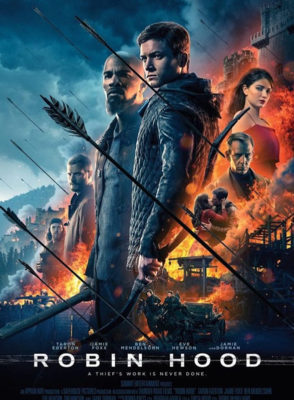 The iconic left-leaning (antifa?) hero Robin Hood has been a staple of movies for almost 100 years.  At least a dozen films have centered around and on the mythic character.

This time out, he’ll rob your wallet and two hours of your life and you’ll get only the mildest diversion from the concerns of ordinary life.

The origins of the popular character are not clear and certainly not sourced from a classic literary tale.  My guess is the primary influence on modern cinema has been the great illustrator N.C. Wyeth, Douglas Fairbanks’ 1922 film and the 1938 MGM classic starring Errol Flynn.

Historically, the Sherwood Forest outlaw Roger Godberd may have been an inspiration for the many fictional Robin Hoods.

In Sir Walter Scott’s 1820 novel Ivanhoe, elements from his tale about a nobleman’s son, Wilfred of Ivan, returned from the Crusades to fight for the rightful king, Richard, were absorbed into the Robin Hood legend, who appears in Scott’s book as only a supporting character.

In the latest iteration, Robin of Loxley (Taron Egerton) is a war-weary crusader who, with his Moorish commander (Jamie Fox) — “you can call me John” — stages a revolt against a corrupt British crown.  There are moments of okay fight choreography, in this less-than-thrilling, needlessly confusing, action adventure that is unintentionally funny in places. 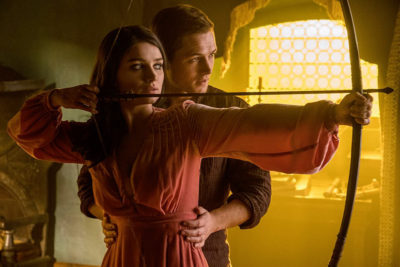 Welsh actor and Kingsman: The Secret Service star Taron Egerton does his best, but it’s his cool wardrobe, complete with a “hood,” that stands out.  Love that quilted-leather designer look.  Besides Foxx as Little John, co-stars included Ben Mendelsohn as the Sheriff of Nottingham, Tim Minchin as Friar Tuck and Eve Hewson – Bono’s pretty daughter — as Maid Marian. 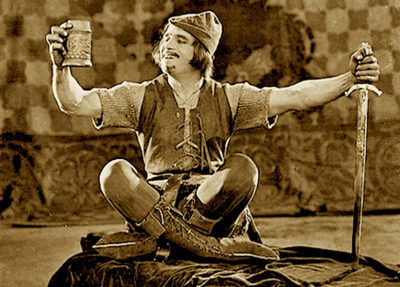 Perhaps the most impressive Robin Hood is pioneer Hollywood director Allan Dwan’s lavish 1922 silent film.  I had the pleasure of seeing this film as a guest of nonagenarian Dwan at a special Directors Guild screening in the 70s.

In scale and ambition, no modern version can compare. This magnificent film, which Fairbanks helped write and produce is available for home viewing on DVD and is worth finding.  Its gargantuan sets along with Fairbanks’ physical prowess and sense of humor make it a timeless treasure. 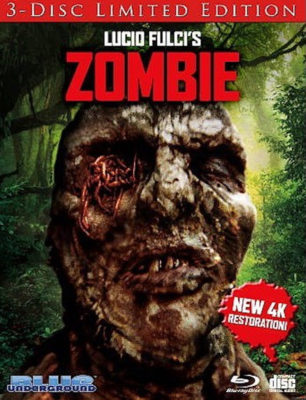 The late Lucio Fulci, was a master of gruesome horror.  His surprisingly well-crafted and audacious 1979 spectacle was initially presented as a semi-sequel to George Romero’s Dawn of the Dead and released in Italy as Zombi.  It was a worldwide hit and certainly the instrumental force in making zombie-gore movies the dominant motif of 1980s Italian horror.

The central story has Anne Bowles (Tisa Farrow) and a group of vacationing tourists traveling to an island where they encounter a doctor (Richard Johnson) attempting to cure a condition that reanimates the dead!

One wonders why this seemingly miraculous achievement would even need a “cure.” 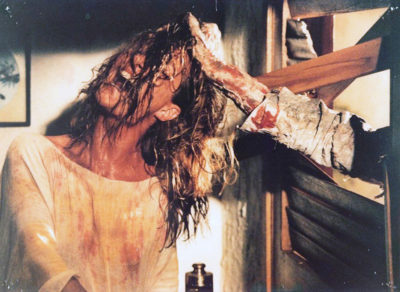 Maybe it’s because things quickly get out of control and undead Spanish conquistadors crawl from their moldy graves hungering for human flesh!

The stomach turning ultra graphic set-pieces by Gianetto de Rossi include a close-up of an eye pierced by a shard of wood and a zombie fighting a Great White shark underwater.

The 40th Anniversary, 3-disc limited edition is a 4K restoration from the original, uncensored, camera negative (2.40:1) in stunning 7.1 DTS-HD.

More than 20 bonus features include hours of new and archival material.  BLUE-UNDERGROUND.  Not for all tastes.