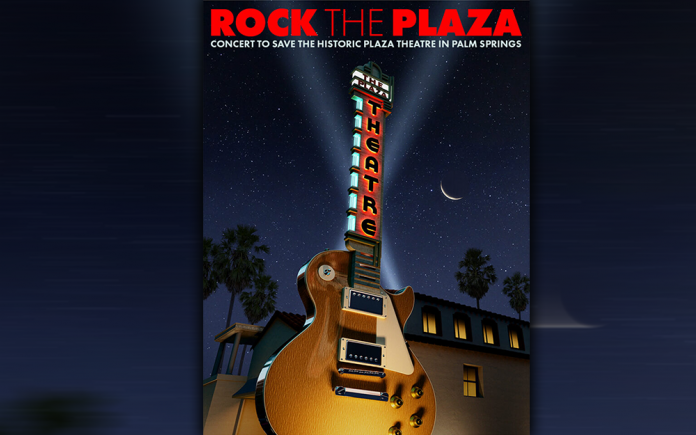 Spiraling klieg lights and a line wrapped around the corner from the Plaza Theatre heralded the return of a Palm Springs tradition last weekend, one remindful of the fabled Police Show, Desert Circus and the Bob Hope Classic Jam Session.

Rock the Plaza, a benefit for the restoration of the historic theater, featured famous local musicians calling on talented friends to perform for the benefit of their neighbors.

But, instead of it being Hope or Frank Sinatra calling on Dean Martin or Bing Crosby, this was Spike Edney, touring music director and multi-instrumentalist for Queen… , and Brian Ray, guitarist for Paul McCartney, recruiting their Palm Springs neighbors, including Paul Rodgers, lead singer of Bad Company and Free, and Matt Sorum, a drummer for Guns N’ Roses and The Cult. 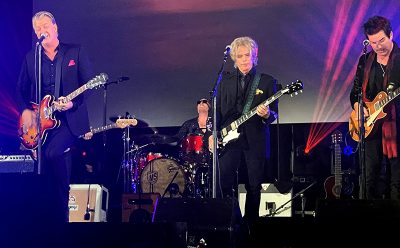 They secured Josh Homme, leader of Queens of the Stone Age who was born in Palm Springs’ Desert Regional Medical Center. They featured Alice Cooper, who regularly plays celebrity golf tournaments in the Coachella Valley and has his own syndicated slot on KWXY Music Radio.

Along with Orianthi, the shredding guitarist who also got a star turn with Ray and Edney’s Palm Springs All Stars band, the local celebrity musicians raised more than $200,000 from ticket sales and sponsorships for the restoration.

After proceeds are counted from a silent auction and costs for the tech crew and catering are paid, the Palm Springs Plaza Theatre Foundation should be just $3.7 million shy of reaching its seemingly impossible dream of raising $16 million to restore the Plaza to its original 1936 luster and have an endowment to maintain it. 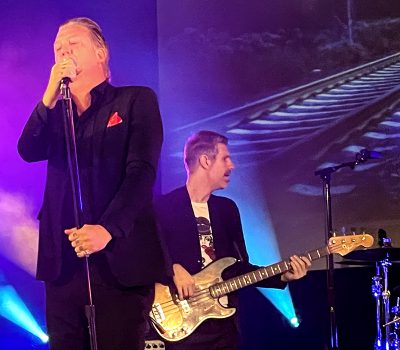 The foundation will continue to present events at the Plaza until construction starts, which Roberts optimistically says could happen before summer. The second Oasis Music Festival is scheduled there in late January, said its Palm Springs Life producer Frank Jones. Modernism Week events are slated there for February, said Roberts.

Palm Springs International Film Festival events also could be held there, Roberts said, if the festival board led by Harold Matzner so desired.

“He doesn’t have to donate a nickel,” said Roberts. “They could have been using it all this time, but they haven’t.”

A new architectural firm, Architectural Resources Group, based in San Francisco, has been hired to update the initial design created by Gensler Architecture, which in 2018 recommended reducing capacity by more than 100 seats to 670 while accommodating American Disabilities Act mandates. The city of Palm Springs will hire the contractor since it’s a city-owned building.

Roberts doesn’t yet know what kind of entertainment the Plaza should provide or who should book it. He said he’s had meetings with Live Nation, which books Palm Desert’s Acrisure Arena, and David Lee, the $5 million donor and co-creator of the “Frasier” TV series who, like Roberts, wants high-quality theater included in a mix of community fare.

“We’re not committing to anything right now,” said Roberts. “But I want to hear from all of them. The more I do, the more I learn.”

To facilitate that, Roberts said he’s created a subcommittee “to research management and operation plans.” 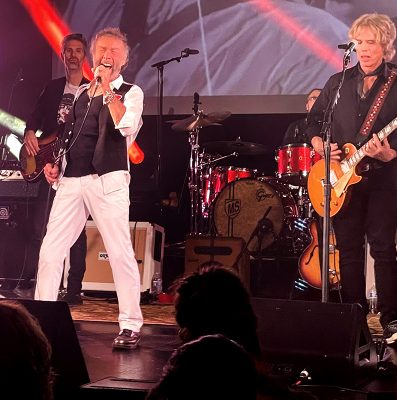 “That was Paul (Rodgers’) first gig since before COVID,” said Edney. “He seemed to be having a great time, so I’m hoping next time I pick up the phone and ask him, he’ll say yes again. There are other people who passed on this. Their arrangements didn’t work. I’m hoping if there’s enough of an excited buzz, I can go back to (Palm Springs-based actor) Gary Oldman. I really want to get actors who sing to perform. There are so many of them who play in their own bands — Kevin Bacon, Kiefer Southerland. I would like to see an actor-music night where the Palm Springs All-Stars brings this kind of thing because nobody does that.”

Creating a buzz about the Plaza and its past Palm Springs legends was a mission of Rock the Plaza. The evening’s second song, by Orianthi, was Sonny & Cher’s “I Got You Babe” with vintage video of the ’60s and ’70s duo in the background. It harkened back to when Sonny Bono opened the first Palm Springs International Film Festival at the Plaza in 1990 with a 10-minute laugh-filled introduction.

Orianthi also sang Nancy Sinatra’s “These Boots Are Made For Walking” as video of that part-time Rancho Mirage resident looped in the background.

Homme, wearing a black shirt and coat with a red handkerchief in his lapel, introduced himself by saying, “Hello everybody, I’m the mayor of Palm Springs.” Then he launched into David Bowie’s “Let’s Dance,” which he recently performed at a memorial tribute to Foo Fighters drummer Taylor Hawkins.

Homme said backstage he brought his “whole family” to the show. He seemed happy to return to the theater where he watched “Dirty Harry” as a kid.

He only sang one original song, “I Sat By the Ocean” from the 2013 Queens of the Stone Age LP, “…Like Clockwork.” He and Orianthi also performed the Frank and Nancy Sinatra duet, “Something Stupid.” He even sang the station ID for the former oldies station, KDES. 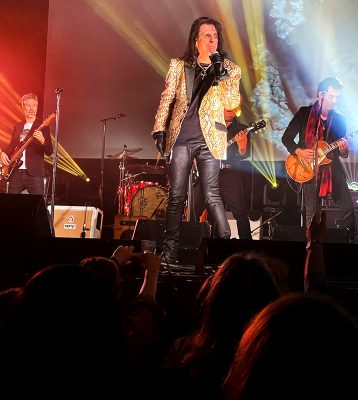 Alice Cooper sang his hits and had the crowd singing along to his anthem, “School’s Out.” The audience stood and sang to Rodgers’ hits, ending with the Free classic, “All Right Now.”

“The creation of the vibe was basically the idea,” said Edney. “Back before COVID, when we started talking about doing this, half the problem was the theater had been forgotten because it had been dark for so long, and you start thinking about it with nostalgia, a back-in-the-day thing.

“That’s only part of the story, though, isn’t it? The theater is eternal if you want it to be. So, it was more of a case of saying, ‘Let’s get people to recognize that the theater is there.’