Back in the late ‘50s and early ‘60s, Girl Groups dominated the airwaves. Acts like the Chantels and the Shirelles built on the tight harmonic blueprint created back in the ‘40s by pioneers like the Andrew Sisters and the McGuire Sisters. Incorporating Rock and R&B flourishes, their sound served as a bridge between the Doo-Wop years and the British Invasion.

The formula was simple, songs limning the heartache, heartbreak, angst and teenage rebellion were written by teams of Brill Building tunesmiths and sung by girl groups with names like the Exciters, the Dixie Cups and the Shangri-las. But one iconic voice stood out from the pack and that was Ronnie Bennett of the Ronnettes.

Veronica “Ronnie” Bennett was born in New York City in 1943. Her father was Irish and her mother was African American and Cherokee. Growing up in Spanish Harlem with her sister Estelle, both girls showed an early affinity for music. Inspired by protean teen sensation Frankie Lymon, the sisters began harmonizing with their cousin, Nedra Talley.

Originally known as the Darling Sisters, they signed up for Amateur Night at the famous Apollo Theatre. They briefly became Ronnie And The Relatives, at this point, the girls took singing lessons during the week and played local bar mitzvahs and sock hops on the weekends. The trio was signed to Colpix Records and cut a couple of singles that failed to chart.

In 1961, they were booked at the Peppermint Lounge. Although they were underage, with the help of their mothers, a surfeit of mascara and a couple cans of hairspray, the girls easily passed for 23. It was the height of the Twist craze, and initially, Ronnie, Estelle and Nedra were mistaken for dancers. But the minute they opened their mouths to sing, they were offered a permanent gig. By now they officially became the Ronettes.

Two years later, completely frustrated by their lack of success at Colpix, they secured an audition with Phil Spector. The wunderkind producer had begun to make a name for himself with his lavish “wall of sound” production style. He and Lester Sill started their own label, Philles. Already viewed as “eccentric,” Spector fixated on Ronnie and wanted to sign her as a solo act. But her mother intervened and insisted it was the group or nothing.

Spector had the Ronettes record a few songs that he then released and credited to the Crystals! But in July, 1963 the trio recorded what would become the penultimate Girl Group song, “Be My Baby.” Bolstered by Spector’s arrangement and production, the song is a curious mix of Wagnerian pomp, circumstance and Rock & Roll grit. Instrumentation was provided by L.A. session players affectionately known as the Wrecking Crew, was then multi-tracked and overdubbed. Layering guitars, horns and timpani and adding an entire orchestra.

Opening with an authoritative drum crack, the track is powered by Ronnie’s vocal gymnastics. Her trilling “whoa-oh-ohs” cemented the Ronettes’ place in the Rock & Roll firmament. The song is #22 in Rolling Stone’s list of 500 Greatest Songs. “Be My Baby” has haunted Beach Boys’ architect Brian Wilson, for decades. In 1965 he wrote an

The Ronettes were at the height of their popularity, they toured the U.K., dated Beatles, and the Rolling Stones opened for them! British Invasion rockers were in awe of these exotic New Yorkers, with their sky-high beehive/bouffant hairdos and smoky eye make-up. Although they recorded other songs with Spector, none of them made the same indelible impression as “Be My Baby.”

Phil Spector finally got his wish and he and Ronnie began a romantic relationship. Despite his possessive and erratic behavior, the couple married in 1968. At that point he not only made her give up music, he literally locked her away, by putting a lock on the outside of their Los Angeles mansion, and surrounding her with armed guards.

A prisoner for several years, Spector even hid her shoes so she couldn’t leave. Finally, when her mother was visiting, the pair plotted Ronnie’s escape. In 1972 she managed to get out of the house, barefoot, and she never returned. Spector’s madness and mania only accelerated. On separate occasions he famously pulled guns on John Lennon, Leonard Cohen and the Ramones. His rage culminated in 2003 when he shot and killed actress Lana Clarkson in his Alhambra mansion. He was convicted of second degree murder and is currently serving a 19 year-to-life sentence in prison.

Ronnie detailed it all in her 1989 memoir, “Be My Baby: How I Survived Mascara, Mini-Skirts And Madness.” In the late ‘90s she took Spector to court and won a judgement awarding the Ronettes 2.6 million in owed royalties.

But the legacy of Phil Spector has been an albatross around Ronnie’s neck. She resumed recording a few years after her escape, making good albums that got lost in the shuffle, (1980’s Siren and the 1999 EP She Talks To Rainbows.) Or good ideas smothered in ‘80s production values (1987’s Unfinished Business).

In the 21st century Ronnie returned with 2003’s Something’s Gonna Happen and 2006’s Last Of The Rock Stars. In the decade since her influence seemed explicit with the emergence of Amy Winehouse. The late British chanteuse not only shared similar vocal traits, but also an affinity for the beehived bad girl look. As an acknowledgement to her troubled and supremely talented acolyte, she added Amy’s signature song, “Back To Black” so her live sets a few months before Amy Winehouse passed away. 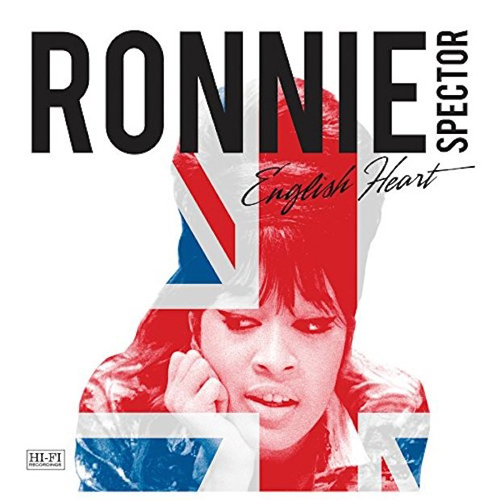 Now Ronnie has returned with her sixth solo effort, English Heart. Here, she cherry-picks 11 of her favorite British Invasion classics. The album kicks off on a somber note with Lulu’s “Oh Me Oh My (I’m A Fool For You Baby).” Finger-snap percussion clicks like a metronome over Hammond B3 and languid acoustic and electric guitars. Whereas Lulu seemed slightly lovesick and desperate, the doyenne of Girl Groups sounds self-assured and confident.

Time hasn’t done Ronnie’s voice any favors (neither have the Marlboro 100s), there’s a bit more vibrato when she holds a note. But she still dominates each song. On some tracks, like “Because” by the Dave Clark Five and “Don’t Let The Sun Catch You Crying,” a #4 hit for Gerry And The Pacemakers, she plays it relatively straight, sticking pretty closely to the template of the originals.

Naturally, she tackles Beatles and Stones tracks, but she doesn’t go for the obvious hits. In fact the Rolling Stones song, “I’d Much Rather Be With The Boys,” was a demo written in 1964, that didn’t see the light of day until it was released in 1975, on an odds and sods collection entitled “Metamorphosis.” Ronnie cloaks the track in a party-time patina, replete with syncopated hand claps and recasts the lyrics as a positive Girl Power anthem.

She also digs deep into the Fab Four catalog for the winsome “I’ll Follow The Sun.” Here the stripped-down instrumentation is pared down to feathery finger-picked acoustic arpeggios.

The best songs on “English Heart” get thoroughly “Ronnie-ized,” which is to say there’s a specter of Spector in each arrangement. “Tell Her No,” the Baroque Bacharach pastiche that gave the Zombies their second Top 10 hit in 1965, is accelerated to a caffeinated tempo.

“Girl Don’t Come” was a huge hit for Sandie Shaw in Great Britain, but is relatively unknown here in America. Another fast-paced track, it weds a hip-swiveling rhythm, roiling bass lines and slinky, chicken-scratch guitar licks, as Ronnie’s insouciant vocals crest over the top.

Finally, she takes a pass at the Animals’ signature hit, “Don’t Let Me Be Misunderstood.” Re-calibrating the jumped-up jittery Blues, she blends a jaunty hand-clap beat with a wash of Wurlitzer, mellotron and Farfisa org an. Where Eric Burdon seemed anguished, Ronnie is matter-of-fact. If you misunderstand her, there might be potential consequences.

Other interesting tracks include fairly straight forward takes on the Kinks’ “Tired Of Waiting” and the relatively obscure Fortunes song, “You’ve Got Your Troubles.” The record closes with her soulful version of the quavery Bee Gees weeper, “How Can You Mend A Broken Heart.”

It was a clever idea to have Ronnie Spector put her stamp on these timeless classics, it’s kind of surprising no one thought to do it before now. Regardless, It’s great to have her back.