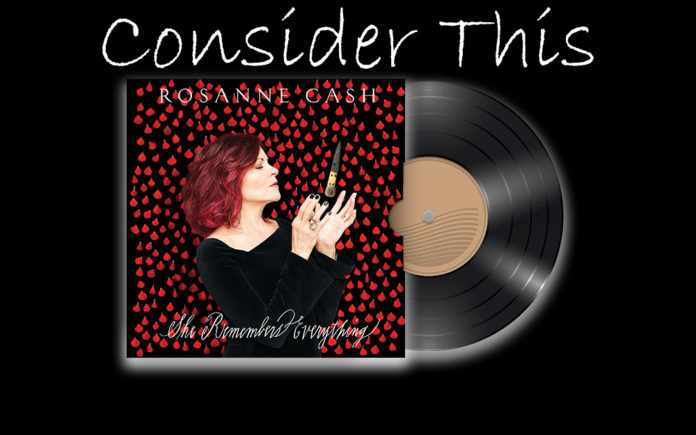 Rosanne Cash officially launched her music career 40 years ago, it only took a few years to successfully step out of her father’s shadow and carve her own path. Her dad, in case you don’t know, was the legendary Man In Black, Johnny Cash. She is his eldest child, born to Johnny and his first wife, Vivian Liberto.

She was born in Memphis, Tennessee in 1955, but she and her three sisters grew up in Ventura, California. Her parents divorced in 1966, and a couple years later Johnny married June Carter. After graduating from High school, she hit the road with her dad, initially her duties were limited to doing laundry, but she worked her way up to back-up singer and then featured vocalist.

Rosanne’s music career was briefly sidetracked when she attended Vanderbuilt University in Tennessee and enrolled in Lee Strasberg’s prestigious Theatre Institute in Los Angeles. But by 1978 she recorded a demo that attracted the attention of Ariola Records, a label based in Germany. Her self-titled debut arrived at the end of that year. Although it remained unreleased in America, the Nashville establishment was paying attention. Ironically, she signed with Columbia, her dad’s label, and her sophomore effort, Right Or Wrong appeared in early 1980.

By then, she had met and married fellow musician Rodney Crowell. Formerly a key component of Emmylou Harris’ Hot Band, his relationship with Rosanne quickly shifted from professional to personal. They married and created hit records like Seven Year Ache In 1981, Somewhere In The Stars in 1982, Rhythm & Romance in 1985 King’s Record Shop in 1987. Rosanne became step-mom to Rodney’s daughter, Hannah, and they had three girls of their own, Chelsea, Carrie and Caitlin.

In 1990, as her marriage to Rodney was beginning to unravel, Rosanne released her most intimate record, Interiors. Critics swooned even though her label was less than enthused (she asked to be let out of her contract and Columbia complied). Country radio, so quick to embrace her before, basically dismissed the album, but it found a home at stations that adopted the new AAA (Adult Album Alternative) format. Following her divorce she relocated to New York City and reconnected with Musician/producer John Leventhal (Shawn Colvin, Jim Lauderdale, LoudonWainwright, III). She charted the course of their romance, veering further away from Country and into venturing into Folk-Rock territory with 1993’s The Wheel. Married in 1995, the couple has a son, Jakob Leventhal.

Rosanne slowed her roll in the ‘90s, and mostly focused on raising her kids, she wrote a book of short stories entitled “Bodies Of Water” and released one album, 10 Song Demo in 1996. It would be another seven years before she recorded again. Rules Of Travel, released in 2003, included a duet with her dad, Johnny, and contributions from Steve Earle and Sheryl Crow. That year she was dealt the double blow of June Carter Cash’s death in May, and her dad’s that September.

Her 2006 Black Cadillac album reflected those losses, along with the passing of her mother, Vivian in 2005. The album was nominated for a Grammy in the Folk/Americana category. The following year she announced she had Chairi I Malformation, a rare brain condition that was corrected by surgery. Her next project took her back to her teenage years.

Back then, her dad was concerned that all her musical knowledge came straight from the radio. So, he issued a bit of a homework assignment, requiring she learn, what he considered to be 100 essential American songs. She completed that task at the time, and in 2009, pared the titles down to 12 classic tracks for her 13th album, The List. Covering songs from Country antecedents like the Carter Family, Jimmie Rodgers, Don Gibson and Ray Price, as well as Folk standards from Bob Dylan, Peter, Paul & Mary and three Johnny Cash songs. The album shot to #5 on the Country charts, where she had been M.I.A. for 22 years, and featured contributions from Elvis Costello, Bruce Springsteen, Jeff Tweedy and Rufus Wainwright. In 2010 she wrote a thoroughly engaging memoir, aptly entitled “Composed.”

Four years later she returned with The River & The Thread, a character-driven song cycle set in the deep South. Not only did it receive unanimous critical acclaim, it hit #11 on the Top 200, #2 on the Country chart and #1 on the Folk chart. It also won three Grammys for Best Americana Album, Best American Roots Song and Best American Roots Performance. Now she has returned with She Remembers Everything, her most personal effort since The Wheel.

The record opens with an insistent kick-drum beat and expansive electric guitar. The propulsive melody, co-written with T-Bone Burnett and Lera Lynn, has a foreboding Southern Gothic feel. The lyrics limn the quiet desperation of a marriage fraying at the seams. Colin Meloy of the Decemberists, shadows her voice on the poignant chorus; “Change will come to those who have no fear, but I’m not her, you never were the kind who kept a rule book near/What I said was never what I meant, now you see my world in flames, my shadow songs my deep regret.”

Rosanne wrote all the lyrics here and collaborated on the melodies with family and friends. Three songs were created at home with husband John Leventhal. Searing guitar notes give way to high lonesome pedal steel and filigreed mandolin on “The Undiscovered Country.” The mournful, back porch melody suits the lyrics’ reverential tone. Here she scrutinizes the eternal gender disconnect, which feels especially apropos with a self-confessed sexual predator in the Oval Office and the #metoo movement reaching a fever pitch. Ultimately, there are no easy answers, so she suggests we “Raise a glass, be thankful for what we don’t understand/The undiscovered country between a woman and a man.”

“Everyone But Me” is a bittersweet homage to her parents and other family members who have passed on. A stark piano ballad, it’s buttressed instrumentally by shaded acoustic guitar, muted basslines and subtle strings. Rosanne’s voice is front and center, catching as she wistfully notes “Mother and Father, now that you’re gone, it’s not nearly long enough, still it seems too long.” Her ache and heartbreak are palpable.

“Crossing To Jerusalem” is also a meditation on mortality. Over a wash of keys, sparkling guitar, fluttery mandolin, limber bass lines and a rock steady beat, (all provided by John), her authoritative alto reminds us even as our journeys differ, our destination remains the same. “The birthdays and the babies, the bourbon and the tears, roaring like a hurricane tearing up the years/Who we are is who we were, and all of you were there, we’re crossing to Jerusalem, it’s nothing we can’t bear.”

The album’s centerpiece is “8 Gods Of Harlem,” a collaboration between Rosanne and longtime compadres, Kris Kristofferson and Elvis Costello. Emerging from the subway, Rosanne overheard a woman murmuring “ocho Dios (eight gods),” and the phrase stuck in her head. A passionate gun-control advocate, she decided to craft a song about a gun homicide, told from three different perspectives. Slashing electric guitars collide with lithe acoustic underpinnings and a propulsive rhythm. Rosanne embodies a bereaved mother mourning her slain child, “the son who was a baby, but who’ll never be a man.” Kris is the bitter father laments a son who starts off “on his best behavior” and ends up “with shit on his shoes…blood on the handlebars” with “nothing on the

News.” Elvis is the helpless brother taking in the scene. On the chorus they unite to pray to the gods of gunfire and regret, collateral children, old illusions, wasted chances, dreams and roses, washed-out paper broken hearts, rage and regret. It’s a devastating track.

The most winning songs on the record are solely the creation of Rosanne. “Rabbit Hole,” originally written as she was recovering from brain surgery, is slow as molasses, the instrumentation features reverb-drenched guitar, rumbling bass, twinkly accordion, tart organ colors, two pianos, a string section and harmony vocals from Colin Meloy. Dedicated to fellow singer-songwriters, Billy Bragg and Joe Henry, the song is a bit of a piquant encomium to her husband John; “I want to make you see that you in your crumpled splendor, when you sing to the farthest rafter/With your big life full of love and laughter can pull me from the rabbit hole.”

Her matrimonial homage is more explicit on “Not Many Miles To Go,” The lyrics offer up gratitude for the couple’s longstanding marriage, their son and musical collaboration. Powered by ragged electric guitar and a see-saw rhythm, her mien is wry and affectionate; “A spinning clock and 12-bar disasters, transformed by your telecaster, we found a new way to keep the beat (tempo baby)/Time keeps slipping through the curtain, with the Empire State and small batch Bourbon, now there’s not so many miles to go, and just one promise left to keep.” Meanwhile, “Particle And Wave” is an Folky, mostly acoustic tone poem that marries the topics of physics and brain surgery.”

Ironically, the swooping title song was co-written by Sam Phillips, a sui generis talent probably best known for adding musical color to the “Gilmore Girls” TV series, but also a singer-songwriter who has released several excellent solo albums over the last 30 years. Sam was married to musician/producer T-Bone Burnett for 15 years, (both have since remarried) and he, along with Lera Lynn created the melody for the closing track, “My Least Favorite Life.”

The former speaks to the process of closing the door on the structure one creates in life. The latter, something of a noir-ish dirge that explores the bittersweet experience of the last child leaving the nest; “This is my least favorite life, the one where I’m out of my mind/The one where you’re just out of reach, the one where I stand and you fly.”

Production duties on the album were evenly split between John Leventhal and Tucker Martine, but “She Remembers Everything” feels seamless. A deluxe edition features three additional tracks, two original songs and a traditional Appalachian ballad. It’s well worth the extra dough.

The Nashville music establishment pretty much abandoned Rosanne Cash after the release of her Interiors album. But she abandoned them right back, moving to New York and continuing to following her muse. She found her niche in the thriving Americana/alt.country landscape. She’s no longer defined by her family pedigree, and that suits her just fine.