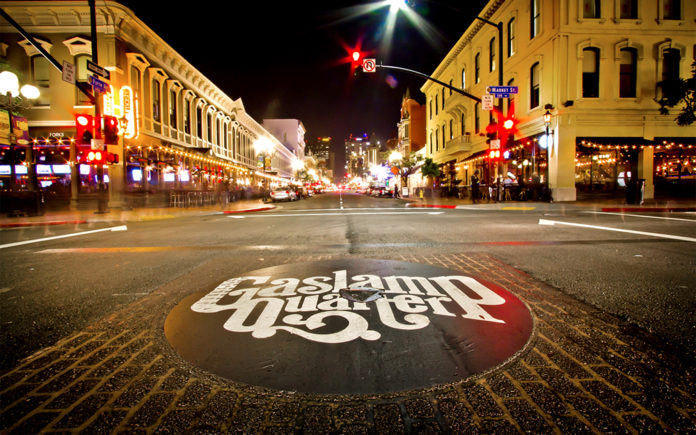 If you can’t take the heat, get out of the desert. And when the summer temps start creeping up to 120 degrees, well, it’s only natural to want flee. For our desert heat escape, we chose San Diego, for cooler weather and some great eats.

It happens every summer in the Coachella Valley. The heat rises up to grueling temperatures that can reach past 120 degrees. Many locals exclaim that they don’t remember the extreme heat from the year before, but I attribute that to straight out denial, or summer amnesia. For this year’s toasty roasty heat wave, my boyfriend and I decided to pack up for a few days and head down to San Diego. San Diegans were experiencing high heat as well, which for them was about 85 degrees, almost laughable to us desert folks. But I guess it truly is all relative.

As a lover of food, I mapped out some places to check out that had some great food reviews, and that I had seen previously on food travel shows. I enjoy watching a variety of shows that focus on noteworthy restaurants, and make a point to write down the name of the ones that I’d like to visit. So far, this sort of passive research has paid off in a tasty way.

We settled in the historic Gaslamp Quarter area of the city, taking up temporary residence at the Ramada off of 6th street. The Gaslamp Quarter is steeped in history, has a plenty of character, and a plethora of restaurants and bars. History, great food and drinks….all of my faves.

After checking in to the hotel, we scuttled on over to our first foodie destination, Hodad’s. The famous family owned burger joint has been in business since the late 60’s and has 3 locations. One in Ocean Beach (original), downtown San Diego, and a seasonal venue at Petco Park. We went to their downtown spot on Broadway, which is in walking distance from the Gaslamp Quarter. I had first become aware of Hodad’s while watching an episode of Diner’s, Drive-In’s and Dive’s. There was host Guy Fieri chatting it up with owner Mike Hardin and “hunch” munching on one incredible looking burger named after him, the Guido (pastrami, burger, ketchup, pickles, Swiss cheese, grilled onions and spicy brown mustard).

Hodad’s has a definite casual surfer vibe, friendly no frills service and seriously fabulous burgers. On our visit and after being seated, we honed in on the burger that we would be trying, the Blue Jay Burger (bacon cheeseburger with blue cheese, grilled onions, mayo, mustard, ketchup, pickles, lettuce and tomato). Not wanting to slip into a food nap, we decided to split a burger, and after it arrived, we were glad that we did. The burger was huge, and our server was kind enough to have it cut in half and separated into our own individual baskets with thick cut seasoned fries cuddling up to it.

Every component of the burger was well proportioned and delicious. The meat was juicy, and most of it dripped everywhere, like a phenomenal burger should. The fries that accompanied the burger were a meal by themselves, with a good fried outer layer and a soft potato interior all sprinkled with savory seasoning. It was a perfect burger experience, and everything that Guy Fieri made it out to be. Hodad’s menu has many other burger offerings, from mini’s, to singles, doubles, bacon, cheese and even a couple of non-burger options. But the burgers are the main event. Sadley, owner Mike “Bossman” Hardin passed away in 2015, leaving his restaurant legacy to his children Shane and Lexi Hardin, who continue to bring the best in burgers to the Sand Diego area. www.hodadies.com From our burger encounter, we went on a quest to find a certain bar that we had both been to long ago, before we had met. We literally walked around the Gaslamp Quarter in what seemed to be an endless circle. Finally, my boyfriend recognized the building, but the name was different as was the color and I was uncertain of his find. We walked in parched from our marathon, and I instantly noticed the large staircase, and realized we had found the place. “What was this bar before,” we asked the bartender, “The Bitter End,” she replied. We yelped with joy, mostly because are hard investigative work had paid off and we weren’t hallucinating. The bar was now The Tipsy Crow (The Bitter End had closed around 2010).

We decided to quench our thirst with a couple of The Tipsy Crows famous Salty Dogs. I’m not a big vodka and grapefruit drinker, but these drinks quickly changed my mind. Their Salty Dogs are made with fresh squeezed grapefruit juice, (juiced to order), Smirnoff Vodka, and a salted rim. The grapefruit was so fresh, I forgot that I was drinking a cocktail. It was a perfect afternoon pick-up! The Tipsy Crow has three levels of tipsy fun to be had, and actually resides in the historic Spencer-Ogden building built in 1874. We are pretty confident we won’t lose this bars location again. www.thetipsycrow.com 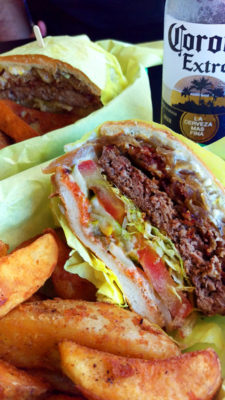 Later in the evening, and after a much needed nap, we got ready for our next foodie stop. I had jotted down this gem while watching the show, The Best Thing I Ever Ate, a food centered show where well known chefs share dishes from their favorite restaurants. This episode was a repeat, originally airing in 2011, but I’m so glad I caught the replay. Dobson’s Restaurant & Bar is located off Broadway, tucked into a side crevice and oh so adorable. It looks as if it was picked up from an old part of San Francisco, and set down in San Diego. Come to find out, Dobson’s is loaded with history, as the bar part of the restaurant was a former bar built in early 1900’s. The rich wooded bar with stained glass accents, muted amber lighting and loft style second story seating provides a romantic ambience. I fell in love with the place immediately, and hadn’t even eaten anything yet. The draw of Dobson’s and what was featured on the show was their ultra-popular Mussel Bisque en Croute. They proudly boast that they have served over a million orders of the bisque, and after indulging in it, there’s no doubt why.

We took a couple of cozy seats at the bar, and absorbed our surroundings. A glass of wine for me, and Manhattan for my boyfriend, and we were ready to order the dish that had lured us there. “Two Mussel Bisques please…and yes, we would love to try some warm sourdough bread with butter,” I said as my mouth was turning to liquid. The bread came out as promised, warm, crusty and sourdoughy. I am a bread butter girl through and through, and could have just made a meal that alone, but there was something special on its way to me. The Mussel Bisques arrived and looked similar to a chicken pot pie with its puffy pastry hat. The bartender than took a spoon and punctured the puff, drizzling a good pour of sherry into the bisque, it was gorgeous. We were now ready to enter the bisque.

One spoon full followed another, followed by silence, we had yet to come up for air. The velvety texture of the bisque was addictive, as the rich shellfish flavors of lobster and shrimp with the light sweetness of the sherry brought a palatable luxury to the dish. We couldn’t get enough. It was open season on the puff pastry, as there are no rules on how to eat it. I enjoyed tearing little pieces off and dunking it in the bisque, none of it could be wasted. The mussels were like little prizes at the bottom of the bowl, and had an infinite supply…they just kept on showing up on the spoon. This dish went beyond my expectations, I mean it was crazy delicious! 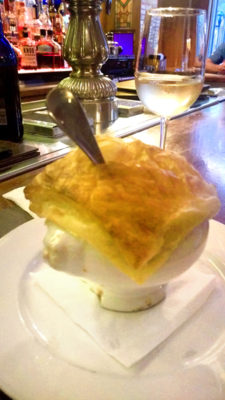 Besides the Mussel Bisque en Croute, Dobson’s has other selections that I look forward to trying on my next visit such as fresh Oysters on a Half Shell, Duck Rillete (French Duck spread), 3 Roasted Texas Quail (grilled and served with blackberry sauce), plus many more selections. It is clear that owner Paul Dobson has created a very special restaurant that has been enriching the dining scene in San Diego for over 30 years. I can’t wait explore more of this little treasure. www.dobsonsrestaurant.com

Our final evening brought us to a place that we had found free style, by just walking around the area near our hotel. It was there that we found Ramen Yamadaya. As we walked by, it appealed to our love of Asian cuisine, plus it was super cozy, resembling a place we might find in a little village in Japan. The thing was, was that it had strange hours. It was only opened until 4pm on the weekdays, so it looked like we would be having an early dinner, around 3pm. However, the positives reviews that I looked up, insured that we would not regret it. 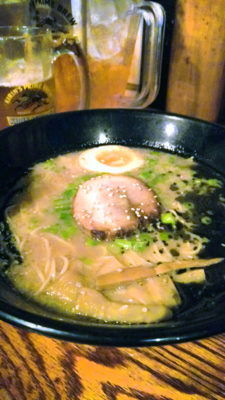 Ramen Yamadaya opened in 2010 in Torrance, California. They now have 7 locations, with 2 in the San Diego area. They are noted to have authentic Ramen, with off the chart broth. It was a must try. We walked in the restaurant a little after 3pm, and took a seat at little table in the step down dining room. The room had a sort of back room feel, something out of a James Bond film, complete with piped in Asian 60’s inspired music. Realizing that they would be closing in a about an hour, we quickly scanned the menu, and ordered an $8 pitcher of Kirin and a large $8 cold sake, which was served in the coolest glass bottle and itty bitty cups ever.

The time came to order the Ramen, and with the assistance of our knowledgeable server, we ordered the Tonkotsu Kotteri ( rich pork broth with salt base sauce and black garlic oil, bamboo shoots, green scallions, marinated egg, braised pork and kikurage mushrooms) and the handmade Gyoza ( pan-fried pork and vegi Japanese dumplings).

I have to stress how AMAZING the broth was, I mean insanely good! It was dense, complex, smokey, thick and evolved. We continually needed to take a spoon full to make sure we weren’t dreaming. It almost made us sad, because we knew the liquid would come to an end, and we lived so far away from it. It pissed us off. The Gyoza were probably the best I’ve ever had. The dough for the dumplings were soft, and perfectly cooked. I was impressed.

All of the Ramen dishes at Yamadaya have the amazing broth, just the additions to the soup change, and you can even create your own. Our experience was there is one that I so look forward to repeating. My taste buds will be in Ramen wait, until I return to Yamadaya once again. www.ramen-yamadaya.com

Escaping the Coachella Valley heat during the summer is only natural. With such close proximity, San Diego is the perfect get-away for cooler temps, a fun atmosphere, and is a fantastic food and drinks excursion.