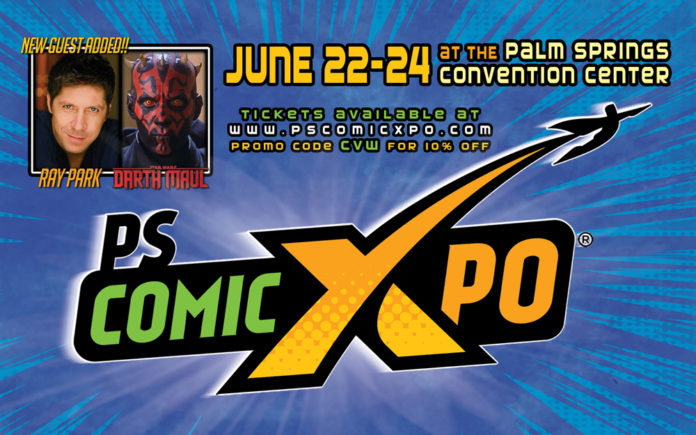 PSComicXpo will have a star studded and powerful mix of comic convention, pop culture and celebrity at its inaugural festival June 22 -24th, 2018 to take place at the Palm Springs Convention Center.

PSComicXpo has curated a star-studded roster of celebrities, artists, illustrators and voice actors to appear at this event including Ray Stevenson (Thor, Rome, Book of Eli) to host the PSComicXpo ribbon cutting ceremony.  Other guests and performers expected to attend include:

There will be constant action to entertain fans of all ages throughout the weekend with planned concerts, a hypnotist show, high quality art installations by top comic book artists, Cosplay, an arcade, a dedicated activity room sponsored by the Palm Springs Art Museum and of course, opportunity for comic trading and purchase.

PSComicXpo CEO, Meachele Campbell is proud of the diversity displayed in the convention line-up and feels this uniquely styled convention will appeal to a wide audience. She states, “The world of comic conventions is a fantastically bizarre and it doesn’t matter what genre – Sci-Fi, Fantasy, Comic, or Pop Culture – you are passionate about. PSComicXpo is a place where everybody is welcome.”

For more information about PSComicXpo or to purchase tickets please visit: www.pscomicxpo.com.  Use code: CV Weekly to get 10% off your purchase.

You’ve seen him in such hits as The Matrix Reloaded, Atomic Blonde, Logan & John Wick. Now find out how this actor and world class stunt coordinator got his start in Hollywood and what he’s learned over the years.

Fans know her not just as the Annabelle Farrell in 2000’s The Replacements, but also from her time on both Melrose Place and Supernatural. Now find out how this actress and writer has managed to find continued success in Hollywood.

Join us as the greatest voice actors in Hollywood gather for a live reading of one of your favorite films in a one of a kind setting in all the voices you love!

She’s one of the top cosplayer in the country who started out for the love of the characters and the joys of creating. Now find out what she’s learned and accomplished over her career and what advice she has for fans.

He’s shown up on the silver screen alongside stars like River Phoenix and Lili Taylor, featured in numerous print publications and conquered both radio and television. Now one of the most exciting hypnotist in the world brings his one of a kind show to Palm Springs for one night only!

Fans known him from his role on the hit series Dexter and his appearances on hit shows NCIS Los Angeles and Hawaii Five-O, now find out how this California native got his start and what he’s got in store as his impressive career continues!

Fans known him as “Ponyboy Curtis” and “Randy Anderson” from the 1983 hit film based on the S.E. Hinton novel. Now find out not only what it was like brining that story to life, but also their thoughts on impact both the film and novel have had on fans over the past three decades.

Fans know his voice from Invader Zim, Ben 10, The Fairly Oddparents and Angry Beavers! Now find out how this fan favorite voice actor got his start and what he’s learned along the way!

He’s one of the top voice actors in the industry, but fans know and love him for his work as the hero Goku in Dragonball Z!  Now find out not only how he got his start in behind the mic, but also what he’s got in store for fans in this rare on stage appearance.

He’s one of Hollywood’s top talents, who’s left his mark on both the big and small screen! Now find out what it was like not only playing Frank Castle in 2008’s Punisher: War Zone, but also Volstagg, one of the Warriors Three in Marvel’s Thor film series and the villainous Firefly in 2013’s G.I. Joe: Retaliation.

She’s one of the lucky citizens of Wakanda, who’s tasked with protecting King T’Challa, in Marvel’s Cinematic universe! Now find out what it was like to be part of one of the top films in the Marvel library, but also one of the top grossing films in modern day history!

All Panels are subject to change.