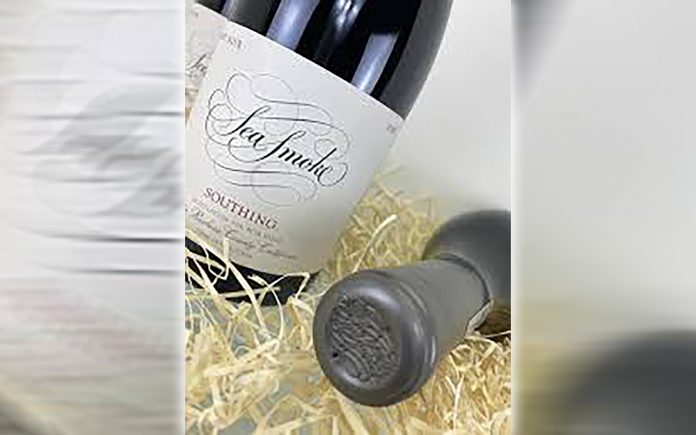 Of course, I was more than pleasantly surprised when my son Paolo dug deep into his remaining wine collection and pulled out two 2009 Sea Smoke magnums to celebrate my recent “yeah—another ‘decade’ birthday”.  Cheers!

The two magnum bottles were the 2009 Sea Smoke Estate Southing Pinot Noir and the 2009 Sea Smoke Chardonnay, Appelation Sta. Rita Hills.  For you wine aficionados who absolutely fawn over Pinot Noir—especially Santa Rita Hills Pinot Noir, just reading of the wine Sea Smoke “Southing” probably brings to mind some of the best juice to come from the beautiful wine country of Santa Barbara.  And their Chardonnay (limited availability), not as well known, rates up there as well.

Here’s the classic spiel about Sea Smoke for those so inclined to read a bit about the world class terroir of Santa Rita:

“Sea Smoke Cellars is a Californian winery in Santa Barbara County that focuses on premium Pinot Noir. The estate was established in 1999 by Bob Davids in the Sta. Rita Hills appellation. Its production is relatively small and mostly distributed through its mailing list. The name of the winery was inspired by the cooling marine fog that is carried into the vineyards along the Santa Ynez River.

All the grapes used in Sea Smoke wines come from the estate vineyard. The property has 98 acres of vines planted with 10 different Pinot Noir clones as well as 10 acres of Chardonnay. The vines are in transitional soils, with elevations between 300-700 feet above sea level, which makes for varied growing conditions. Sea Smoke has used biodynamic farming practices since the 2013 vintage.

Sea Smoke makes three Pinot Noir wines: Botella, Southing and Ten—which is a blend of all 10 Pinot Noir clones. A change of winemaker before the 2009 vintage shifted the wine style of the Pinot Noir, with subsequent vintages undergoing less extraction and seeing less new oak. In the mid-2000s Sea Smoke introduced the Gratis Chardonnay exclusively as a reward for mailing list members. It was so well received that a second Chardonnay was introduced and added to the regular catalog of available wines.

Each year, the goal for Southing is to create the ideal marriage of complexity and elegance. The ever-changing nose of the Southing exhibits watermelon, jasmine, Victoria plum; and subtle baking spices. The fine tannins and minerality are enhanced by the estate vineyard’s characteristic cool climate acidity.”

And here’s a little more background to this area, quoting the New York Times back in 2015: “In the mid-1990s, more vineyards were planted in the Santa Rita Hills as newcomers came to believe that this seemingly inhospitable windswept, foggy western edge of the Santa Ynez Valley might be just the right place for grapes like pinot noir and chardonnay. The steady growth accelerated after the 2004 movie “Sideways” sang its rhapsody for pinot noir and the Santa Ynez Valley. By that time, the federal authorities had approved “Santa Rita Hills” as an official American Viticultural Area, though it is now rendered on labels as “Sta. Rita Hills” to avoid legal conflict with Chile’s huge Santa Rita winery.”

“The wines themselves were divisive. The dominant style for California Pinot Noir in the first decade of the 21st century was opulent and powerful, with sweet, flamboyant fruit flavors and thick, plush textures. Most Santa Rita Hills Pinot Noirs were squarely in this style, which proved popular with some critics but alienated others. More recently, many producers throughout California have gravitated toward freshness, elegance and finesse, characteristics that historically helped to make pinot noir distinctive.”

And as we’re learning and experiencing in our 21st century brave world of wine, wine makers, wineries and producers are delivering wine that just gets better and better.  Ditto that with the wine makers in the Sta. Rita Hills appellation.

With that review in mind, consider the 2009 Southing our family enjoyed with a simple fare of grilled chuck steak burgers, corn-on-the-cob and fresh vinegary coleslaw. The dark fruits in this wine—the plums and cherries tasted like a warm harvest day in October.  The chiseled fruit of its youth has now made way to mellow and savory.  Forest floor permeated, a little mushrooms here & there with a touch of cola, mint and a hush of violets. The wine is still wondrous and elegant with a more than silky nose.

What a birthday treat that was!  If one can still find a magnum of that 2009 around at some wine shop—which would be a tough find, it would probably sell for around three to four hundred bucks.  But no angst here, we simply enjoyed a memorable wine dinner party and appreciated our blessings

But wait!—there’s more: While celebrating my birthday week, we decided to open up the magnum of 2009 Sea Smoke Chardonnay and pair it with home fish-fry that included crispy French-fried potatoes and that more-than-agreeable vinegary coleslaw.

That estate-grown Chard was still elegant with depth and great mouthfeel.  The fresh acids had subsided, but the wine was stately refreshing with aromas and flavors of aged lily & hibiscus, nectar, honeydew, and warm macadamia.  Cheers!