Within the average lifetime of any given individual there are but a few days lived on this earth that can truly be deemed as historic in a life-changing manner. On June 26th, 2015 the Supreme Court of the United States of America made an undeniably historic, 5-4 decision in favor of equality and love. Later that afternoon, hundreds of people varying in age, gender, racial, religious and socioeconomic backgrounds braved the stifling heat and humidity to gather at Francis Stevens Park, downtown Palm Springs, to commemorate the momentous occasion at a rally hosted by the LGBT Community Center of the Desert.

The air was thick with emotion as multiple generations of LGBT supporters and advocates united to reflect on what has been a long and treacherous journey towards equal rights for every American. Their goal was simple……that every American would simply have the right to marry the person that they love. Being the truly momentous occasion that it was, an overwhelming number of attendees were eager to share their feelings, thoughts and perspectives on the day’s events. 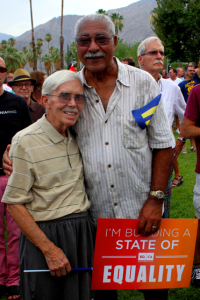 Ball: “We have been together for 54 years. I never thought this would happen. We are so glad that we lived to see it. In our case we have been able to be role-models for a lot of people. We are not only a committed gay couple, we are an interracial couple and as you can imagine, from the 1960s to this very day, we have been through a lot together. We know what it is to go to a restaurant where we were refused service. Now they can’t do that anymore.”

Covington: “I am just so happy. At last, we are official!” 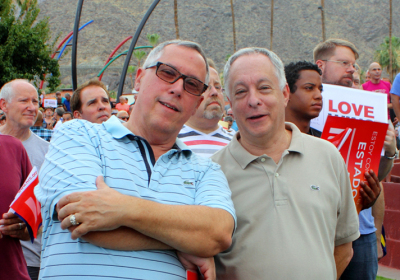 Sanford Cohen, Bob Hrtica: “We have been together for 17 years. We got married in 2013 and we are really happy that people like us in other states can do the same.” 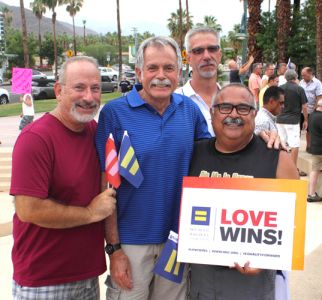 George Padilla, (far right) Board member of AIDS Project Los Angeles: “It is a long overdue day in history. We have nations such as Ireland, Spain and most recently Mexico who now allow marriage equality for all. For us, being such an advanced nation to come to this conclusion so late is unfortunate, but I am so glad we have made it. It has been an amazing journey and this is a wonderfully emotional day.” 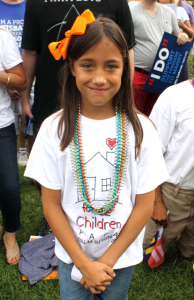 Solange Signgoret (featured speaker): “I feel really excited and happy that all people, whether they are gay or straight can marry whoever they want.” 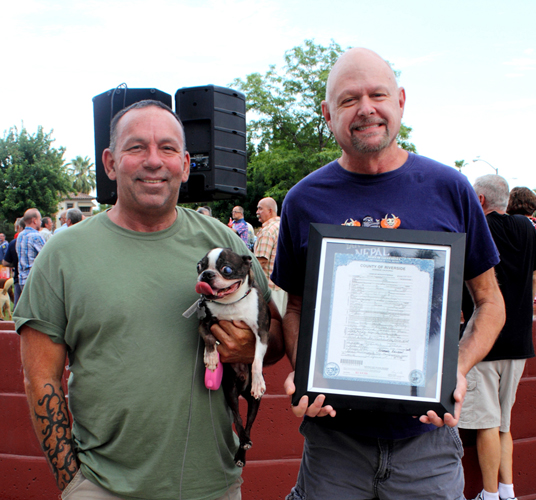 Mark Triplett, Jesse Morales Triplett: “We brought our marriage certificate. It was issued to us when we were married in 2008 when marriage equality was first legalized in this state (before Prop 8 temporarily banned it). We came today to show everyone how happy we are with the decision that the Supreme Court made. Now everyone, regardless of sex, can show their pride and dedication to one another and experience the same happiness that we have been able to experience.” 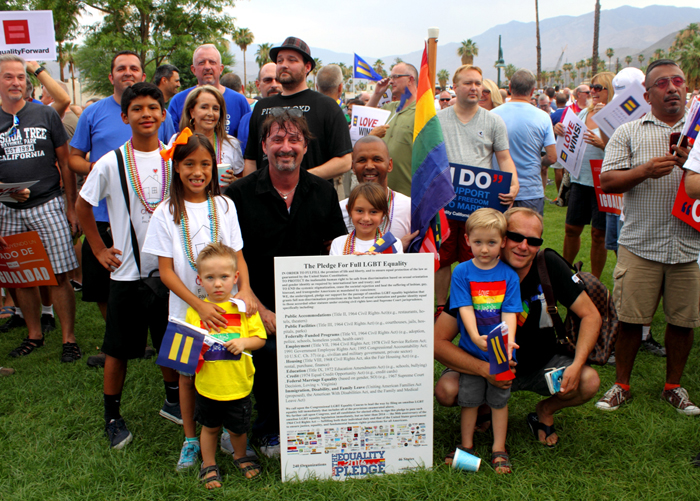 Richard Noble: “We brought a copy of a civil rights bill that is going to be filed at the end of the summer. It will be the first civil rights act that systematically adds sexual orientation and gender identity to all civil rights laws. We have 240 endorsements from 46 states and organizations nationwide. I walked across the country carrying this rainbow flag to raise awareness and while doing so we were able to garner support for a comprehensive civil rights act.” 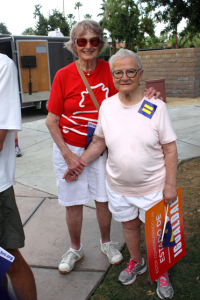 Pella: “We got engaged 55 years ago and we have been waiting this long for our love and our lives to be considered legal. (Gesturing towards Owen with a grin) She’s a nice lady, ya know? I’ve always wanted to marry her but if this kept dragging out she was going to get to old!”

Owen: “I just want to say how much I love her and that marriage does make a difference.” 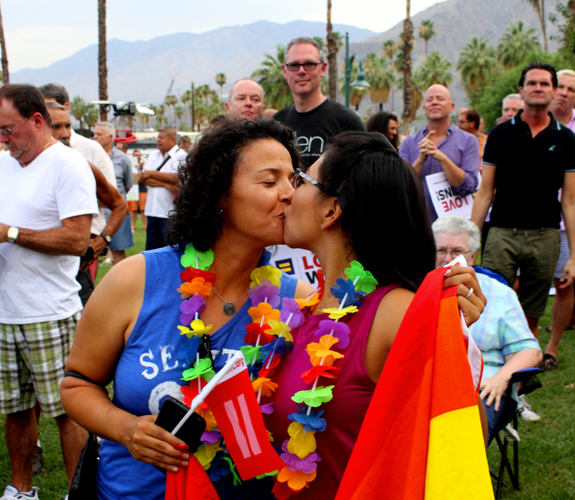 Salas: “This is a really emotional day for me because for so long I have never truly felt accepted. To feel the acknowledgement and acceptance of our government feels like it’s an example being set for all of our family members who don’t accept us.”

Zamora: “We are changing history. People out there who have not been able to feel accepted can now see this change and embrace themselves.” 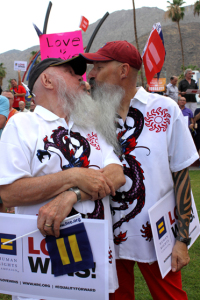 David: “We had our names changed when we were legally married in Canada back in 2004. We were both ministers in the Lutheran church. I was fired from my tenured position because this David fell in love with this Jonathan (winking). It felt profoundly biblical if you ask me! We eventually became clergy in the Episcopal church which is accepting of our love. We are now retired from the ministry.”

Jonathan: “Back in February we celebrated our 25th anniversary. It is just so fantastic that our union is now recognized throughout the entire nation!” 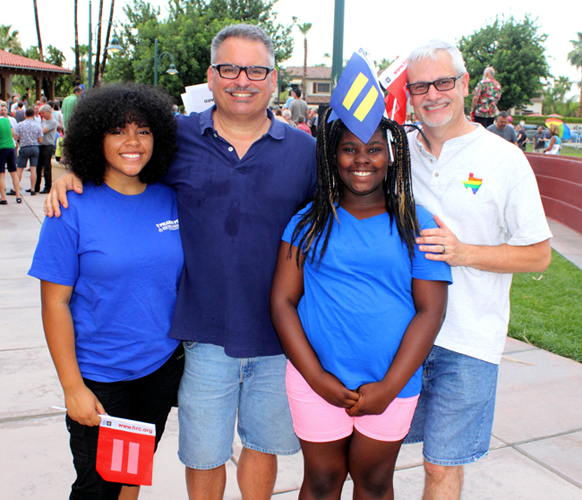 Tim and Dan Dyar-Place with their daughters, Naya and Lilly

Naya: “I say, finally! I think it’s just been such a long time coming and it’s so great that it’s finally here. Finally, love is legal.” 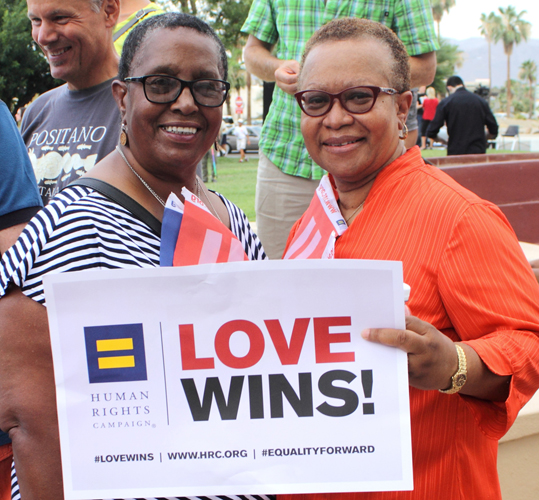 Southall: “This is such a great day. I think about Harvey Milk a lot. How he encouraged us to come out in the 70s and we did. It was a long arduous journey, but now we are here and it was worth it.” 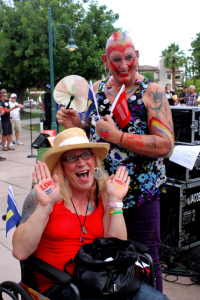 Taylor: “I feel wonderful! The great thing is that those of us in California have been able to experience the blessing of marriage equality and now it is across the entire country! Now everyone can be as happy as we are!”

Sweet: “We both fall under the transgender category and we both, in the past were in heterosexual marriages with kids and living a lie. The irony is that when we both decided to be truthful to ourselves and everyone else we actually lost the rights we once had. The right to marry the people we loved was now something that we had to give up because we came out. It was a sad and bizarre twist in life. Now, I am happier than I have ever been.” 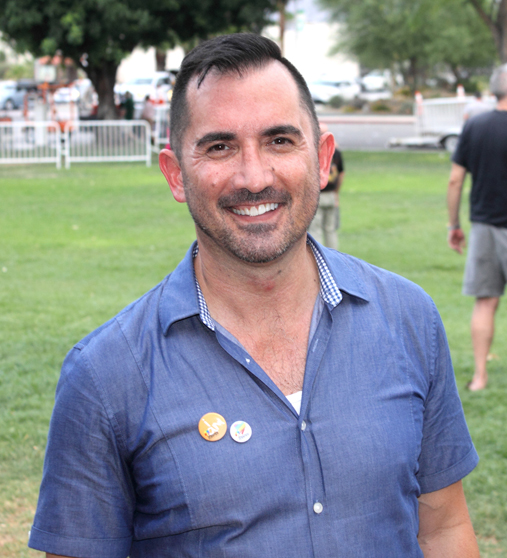 Mike Thomson, Executive Director of LGBT Community Center of the Desert: “I couldn’t be happier. Today is an historic day and at the very core of today’s decision we see that love ultimately wins. When love wins, people have a vision for their life and for their future which is really the best thing we could ever hope for.” 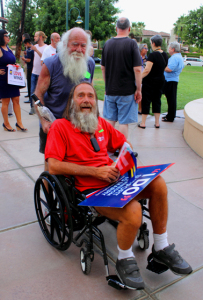 Jason Hackman and his partner Robert

Hackman: “Robert was in a long-term relationship with a man for over 30 years. He was a well-respected doctor. They lived a lavish life and owned many properties. When his partner passed away he had no will and without any legal claims on property they had accumulated during their life together, Robert literally ended up on the street with nothing but the clothes he wore to the funeral. He was on the street for some years before we met. We have been together for a few years now and with both of our health problems we have lots of reasons to take care of each other. Thank God for this decision. Hopefully others won’t have to go through what he has.” 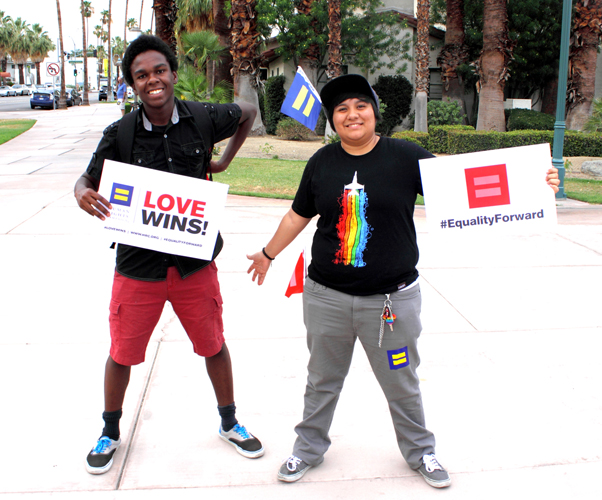 Toledo: “Honestly, this is amazing! I feel like there are always going to be people who are going to try to bring us down but, today we can be happy and hold our heads high because we are united and we have been given legitimacy.”

Hackett: “I am so happy to be here and now I can love whoever I want to love.” 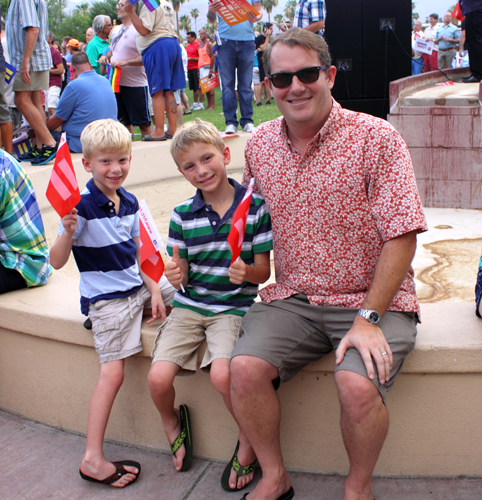 Jim Stewart with his sons Frank and Samuel

Stewart: “I think this is a great day because now my kids can marry whoever they want to marry.”