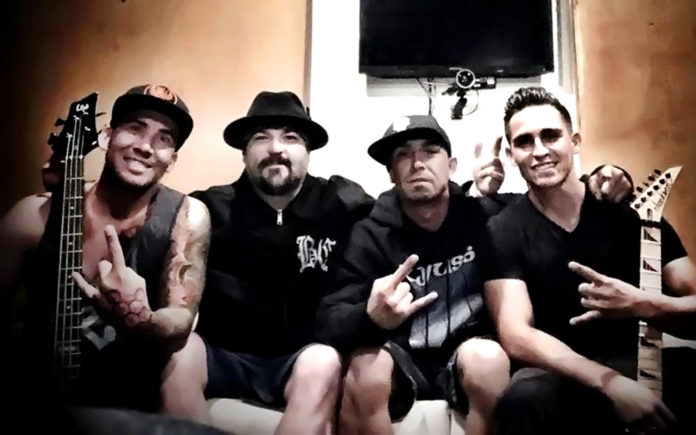 This coming Saturday marks the debut of Chris Williams as the new Se7en4 guitarist. Nico Flores, vocals, Steven Hall, drums, and Trevino Martin, bass, of Se7en4 will be performing, along with Williams, at the first ‘Lo Desert Rock Show’ on December 8th at 9 p.m. at The Viper Room in West Hollywood. This event is brought to you by Coachella Valley Weekly and Mikey Doling’s JaxxRock Entertainment. The concert also features desert rock dependables House Of Broken Promises, Throw the Goat, Mega Sun, and Broken Machine. Tickets are $10 and are available for purchase on Eventbrite. In addition, space may still be available on the ‘Lo Desert Rock Bus’. For $50 you will receive show entry, transportation, mixers, ice, water and camaraderie. You can bring your own alcohol on the bus. Contact Phil Lacombe on social media or email him at philip@coachellavalleyweekly.com for further information and to secure your seat.

Coachella Valley Weekly spoke with Williams about his background and new duties as the Se7en4 shred-master. Subsequently, CV Weekly also connected with Se7en4’s lead vocalist, Nico Flores to share about Williams and the next Se7en4 chapter.

CVW: What has it been like for you being a member of Se7en4?

WILLIAMS: “It’s been a blast! The guys of Se7en4 are great musicians and it’s a great experience for me musically.”

CVW: Was there any type of initiation that took place?

WILLIAMS: “There was no initiation process, so to speak. One day Nico just asked me if I’d be interested in trying a rehearsal, like an audition kinda, and it just went well. I was given their album, learned all the songs, and showed up prepared. That’s why I feel I got the gig. Nico had known of my playing from my short little guitar videos on Instagram, so he thought I’d be a good fit and so far, he has been right.”

CVW: Se7en4 have a significant musical history. How familiar were you with the infamy that is Se7en4?

WILLIAMS: “I wasn’t too familiar with Se7en4. I knew Nico, and then later met the rest of the group. But I did see their last show and they killed, so I’m definitely super-stoked to be a part of Se7en4 now.”

CVW: What are your favorite music qualities of your new bandmates?

WILLIAMS: “My favorite music qualities of the guys would be they fucking rock! All of them! But individually, Trevino has an awesome ear for music and he’s well versed at his instrument. His knowledge of music would be my favorite thing. Steven is a talented drummer but my favorite thing about Steven is his charisma. He really has that showman in him when he’s behind the drum set, his timing is always on. As for Nico, I really love his ability to be a great frontman. He’s an awesome singer and his ability to front the stage is next level for sure. With music and bands, people can be great at their instruments but there is the showman part that’s equally important and Se7en4 has the whole package.”

CVW: Tell us about you and your family.

WILLIAMS: “I live in Yucca Valley now. I was born in Indio. I am a proud father of two beautiful little girls, so I’m definitely a family man, but I’ve been so blessed to have a family that supports me in my musical journey.”

CVW: Tell us about the new Se7en4 music.

WILLIAMS: “As for the new Se7en4 music, everyone is just gonna have to wait and see. One thing I believe Nico, Steven, Trevino and myself have as a band is chemistry. We are all good guys that communicate well, and are aimed at a common goal, which is to practice hard and have fun performing. That’s what music is all about, so I consider myself lucky to have the pleasure of rocking with these guys. Everyone can be damn sure we are gonna own the stage every time we play.”

CVW: Given your ability and how smooth it has seemed, what has been the biggest challenge for you?

WILLIAMS: “The biggest challenge for me is maintaining my improvement and knowledge as an instrumentalist. I believe in being dedicated and true to my instrument, so that means I’ll never truly be satisfied as I constantly aim to improve to my maximum potential. As anyone that plays can tell you, you never stop improving so it’s a pipe dream in a way. So for me, the biggest challenge is accepting that if I want to keep improving I cannot be fully satisfied, because satisfaction is the root of mediocrity and I’m aiming as high as I can in terms of improving as a guitarist, as a musician, and now with Se7en4 the best bandmate I can be.”

CVW: How did the process go to find Chris or did he find you?

FLORES: “Chris and I work in the same industry. I ran into him after work one night and found out we both happen to be martial artists. I train in Brazilian Jiu-jitsu and he trains Mixed Martial Arts out in Indio and that’s where we clicked in the beginning over having drinks after work. I didn’t find out till later that he played guitar.”

CVW: What does the new Se7en4 music sound like compared to the Pete Burquez era?

FLORES: “Not too much different. I’ve always written most of the songs with the boys adding what they add to make our music what it is. I’m really looking forward to Trevino and Chris taking a larger role in that department. Both of those guys speak the same language. It’s been awesome watching them collaborate during these past rehearsals.”

CVW: Pete was a large part of the success of Se7en4. Where do you guys go from here?

FLORES: “We wish Pete nothing but the best. It was just time for him to move on. You are going to see a lot of cool shit coming up. I hope you’re ready!”

CVW: Chris is an amazing musician. What were the highlights in choosing him?

FLORES: “When I found out he played guitar, I was like ‘whatever, another guitarist, good for you’. Then he showed me a video of him playing at the Whisky A Go-Go with the previous band he was in and I was blown away by his stage presence and skill. Plus, we get along really well.”

CVW: (Tongue in cheek) Is Chris too clean cut for Se7en4?

FLORES: “Is he too clean cut? He’s one of the nicest most respectful people I’ve had the pleasure of meeting but he’s a motherfucking cage fighter! He fits right in with us.”

CVW: ‘Lets Get High and Fight’ was released in 2014 and still sounds relevant today. Is there a conscious effort to stay contemporary and are you doing that with the new music?

FLORES: “We are making a conscious effort to be more prolific with our music. Bringing back our old punk/thrash style with some added groove and the same aggressive ‘in your face’ style.”

CVW: What do you anticipate for Chris’ debut at The Viper Room?

WILLIAMS: “As far as Chris’ debut? We are super excited to showcase the newfound chemistry he’s brought to the band and are extremely excited for this particular show because we get to rock the stage with three of my favorite desert bands, HOBP, Mega Sun and Throw The Goat.

Special thanks to Phil Lacombe and Mikey Doling for putting this show together and inviting us to play.”

You can find Se7en4 on most platforms and social media sites.