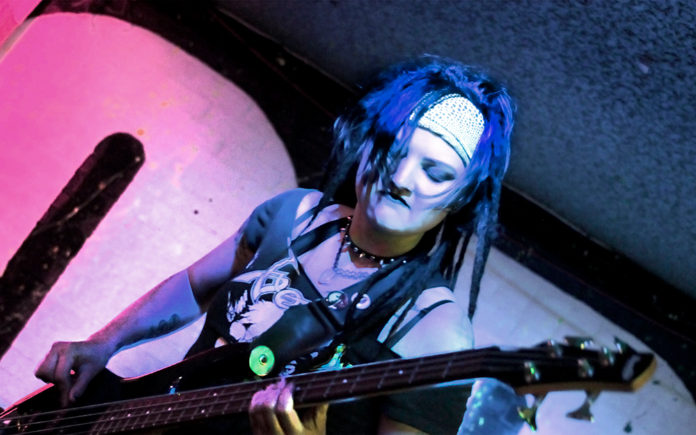 If you consider the elite bassists who have called the desert their home in the last three decades, you’ll find that we have some of the best four-stringers in the world. The bass guitar is that forsaken and unsung instrument that we underestimate in a band. The knee-slapping memes are endless. The truth is that without the bass your band is insignificant.

2019 CVMA winner of ‘Best Bass’ Serene Noell, knows this all too well and has demonstrated, through her bands ORMUS and THE AFTER LASHES, that she is top-drawer of the bottom dwellers.

Coachella Valley Weekly celebrates this woman who rocks. Despite the demand of her two bands, Noell found the time to talk to us.

CVW: I have seen you perform, and you definitely are an elite musician. What was going through your brain when you saw the other nominees on the list? You’re in good company with Derek Wade Timmons, Armando Flores, Dan Dillinger, Bryanna Evaro, Aaron Ramson, Andrea Taboada, Dub Wallace, Nigel Dettelbach & Jeremy Parsons.

Noell: “I am so honored to be sharing a ballot with these talented individuals. It’s unreal that I won the category. I still can’t believe it! I am grateful for this music scene where there is an abundance of love and support.”

CVW: How has the steady success and increase in fanbase affected the ORMUS?

Noell: “ORMUS has come a long way since I first spoke with the band late last year. We are doing amazing, we are getting more creative, tighter and sillier as the ‘Ormwheels’ keep turning. Our fans seem to like our stupid memes we post so that’s cool. We are dorks and will probably get dorkier over time. I love those nerds.”

CVW: THE AFTER LASHES are another highly successful band you are a member of. What are the contrasts in your approach to either band?

Noell: “Both bands are very similar when it comes to musicianship which is the reason we share a guitarist (Chaz Marriott AKA ‘Gina’). The only difference is the genre we play in. ORMUS is Metal and funky, while THE AFTER LASHES are fun and Punky.”

CVW: What are the future plans for each band?

Noelle: “Our plans for both bands are to take us as far as we can go with our music just like any aspiring band. I really want to travel!”

CVW: It is my opinion that you are a musician first and foremost. How far removed are you from the obvious fact that you are a female in a business where males are the majority?

Noelle: “I think females are rising and becoming more confident to be who they really want to be these days especially in the music business. When I was a young teen, I remember seeing an all-female tribute band, THE IRON MAIDENS, and since then I always wanted to be a shreddy powerful chick like them. If I could inspire anyone to do what they always wanted I would die happy. If I could do it, y’all sure as Hell can!”

Noelle: “Well ‘Zazz’ is short for ‘pizazz’, which is what I use to describe these meaty bass riffs. You get the rest…”

CVW: Tell us about your family? I know you recently lost your brother Kristian. I’m so sorry.

Noelle: “I love my family and wouldn’t want to know who I would be without them. If it wasn’t for my sister Esther Sanchez, (vocalist for THE AFTER LASHES), I don’t know if I would have the balls to join a band in the first place, especially one with her! My brother Kristian was a talented song writer and rapper and has always inspired me to go for it. It’s been rough but since he has passed I have even more drive to pursue my dreams because I know he would want that. He will always inspire me, and I miss the Hell out of him.”

CVW: ORMUS continues to call Sky Valley home where the population is less than 2,500 and covers less than 25 square miles. What makes Sky Valley unique?

Noelle: “Sky Valley is where I live. ORMUS practices outside of my house and we never get complaints from the neighbors even when we play super loud video game theme songs and noodling nonsense past 10 p.m. It’s no city life that’s for sure.”

CVW: There are plenty of female rockers you could point to as influential. Who do you identify with?

Noell: “The main females that rock my world are my very own band sisters. I love you girls! If you want some big-time names, I love Nita Strauss, guitarist for ALICE COOPER and THE IRON MAIDENS, Gail Ann Dorsey, bassist for David Bowie and Lenny Kravitz and Sean Yseult, former bassist of WHITE ZOMBIE. Put those ladies together and that is my aesthetic.”

CVW: Is there anything else you’d like to cover?

Noell: “I wanted to add that THE AFTER LASHES are re-releasing our album Swallow It with a few new tracks and ORMUS is recording our album so stay tuned on our social media pages!”