If you’re reading this today, January 6, there are still seven days of great movies that will screen at various venues in the Palm Springs area. Here are some cool films worth catching. (Actually, it’s hard to go wrong even with random picks.) And then of course there’s the “Best of Fest!” screenings all day Monday, January 11 at the end of the PSIFF. Check psfilmfest.org for titles, time and place on January 10. 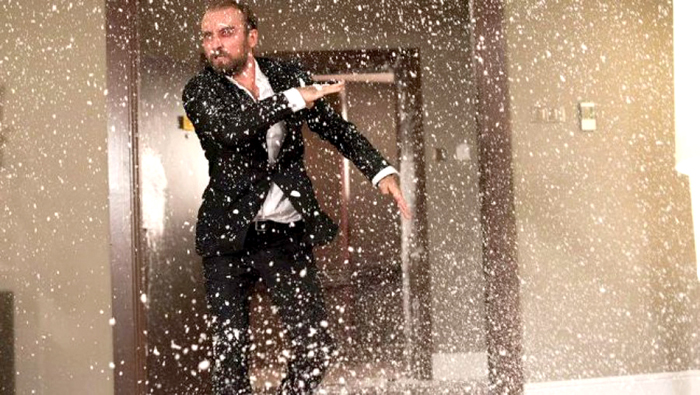 I love Polish director Jerzy Skolimowski’s nifty little thriller. It reminds me in places of the unsettling tone of Hitchcock’s REAR WINDOW. The wonderful conceit here is that an 11-minute story is revealed from multiple perspectives that unfold in what seems to be real time. This adroit, technically masterful tour de force comes from a mature filmmaker at the peak of his considerable powers. What appear to be vignettes of random moments take on a whole new meaning in this tight exercise of pure cinema. 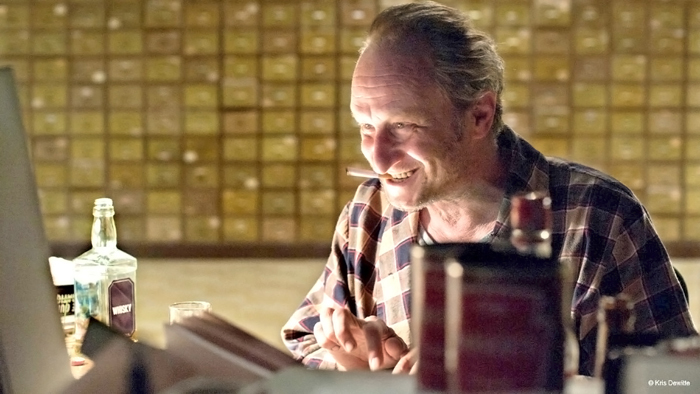 Jaco Van Dormael’s award winning, irreverent comedy is laugh-out-loud funny. I don’t think of Belgium as a country that produces filmmakers of comedic brilliance, but this film that posits an unpleasant God as living in Brussels with his wife and 10 year-old daughters Ea suggests otherwise. Director Dormae (TOTO THE HERO), is refreshingly free of the restraints of political or religious correctness.

This religious satire – if that’s what this is — gets into high gear when Ea hacks into her dad’s computer and texts everyone regarding the exact day they’ll die. Then she runs away to earth where she recruits half-dozen unlikely apostles and reveals a brand new testament. People are released from the ancient idea of an all-seeing deity and indulge their basest notions (Catherine Deneuve has an affair with a gorilla). Finally, God (a memorably irascible Benoit Poelvoorde) finds himself forced to descend to earth in an effort to make people fear him again. 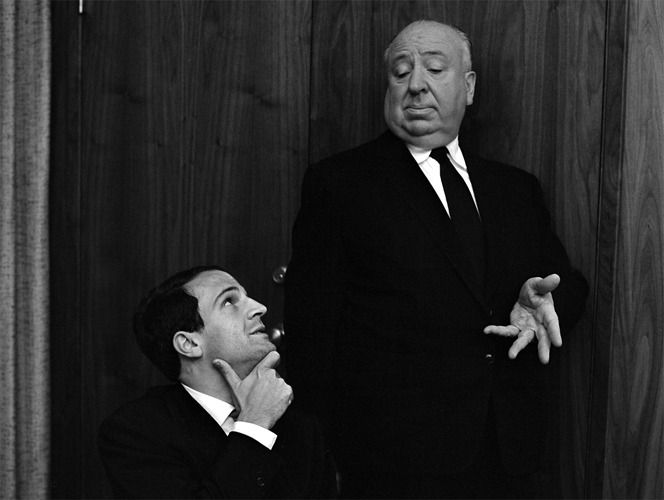 When I was in film school, Francois Truffaut’s published conversation with director Alfred Hitchcock was a kind of movie bible for me. This terrific documentary, revealing of both Hitch and critic turned iconic Nouvelle Vague director Truffaut, puts new life in his 1960s interviews with the master of suspense. The film-by-film examination of his illustrious career is supplemented with choice clips from other esteemed directors. This delicious French film from director Kent Jones is a gift for film buffs. 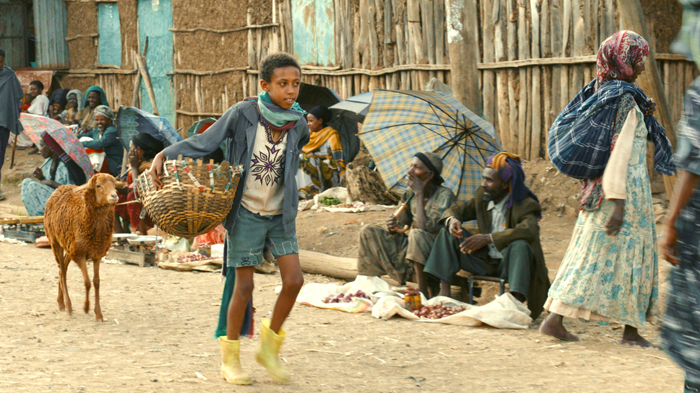 This poignant, beautifully filmed coming of age drama comes from first time Ethiopian director Yared Zeleke. The story focuses on young Ephraim who, after his mom dies, is sent by his dad — along with Chuni his beloved lamb — to live with is gruff uncle. Unfortunately, the latter only sees the lamb as a tasty meal that’s perfect for an upcoming feast.

Exquisitely composed by Josee Deshaies, this sweet, often witty film from a child’s perspective gives fresh insight into a way of life foreign to our cultural sensibilities — but not our hearts. 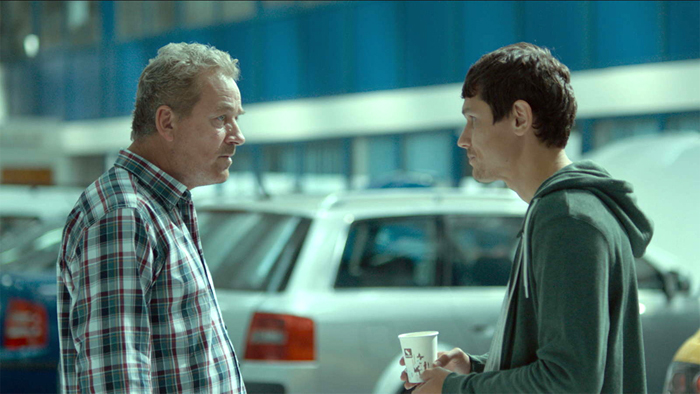 What to do when you overhear an emotional and private argument between a married man and a woman and then get discovered by the man? Then the man realizes you obviously know they are having a secret affair. And when the female turns up dead, the cops question the guy, and you realize he says nothing about even knowing the girl. What do you do? Clearly it’s no secret the guy knows you know he’s the likely killer. And now he’s getting chummier and chummier with you. Do you keep the secret? Tell the police? Hide? The stress is almost overwhelming.

This unsettling story of Vali’s death (murder?) and the increasingly frightening insinuations of Patrescu into his neighbor’s life rivets in this intense and slick psychological thriller from Romanian director Radu Muntean. 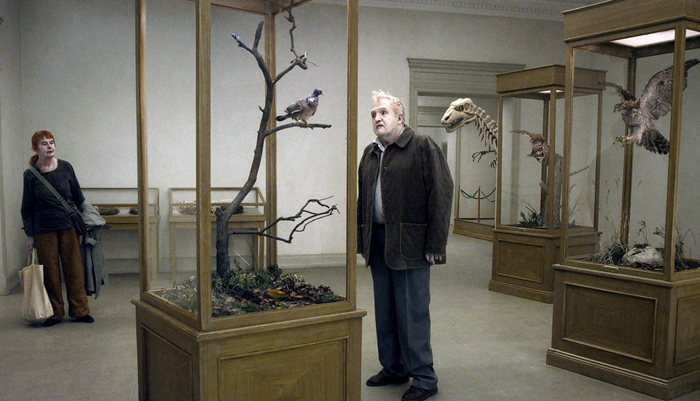 A PIGEON SAT ON A BRANCH REFECTING ON EXISTENCE

Swedish director Roy Andersson’s sublime, existential comedy can be experienced as a meditation on the meaning of life. Or, it can be seen as the strange vagaries of what it means to be human. Or maybe it’s just an exploration of how crazy we humans are in our most ordinary and mundane moments. On the other hand, maybe it’s none of the above. Whatever it is, this perhaps intentionally ambiguous film is made up of 39 vignettes that include recurring, sad-looking, white-faced characters doing stuff in fastidiously designed sets that have a dream-like ambience. Oh, there’s another thing, a locked-down camera photographed each of the single shot scenes, so there’s a Zen stillness to the scenes that perfectly matches the koan-like uncertainty.

Needless to say, this meticulously crafted, admittedly odd, but ferociously humanistic film about life, death and the random stuff that happens in between hypnotized me. Andersson’s stunning movie is cinematic art of a very high order and is my favorite in this year’s festival, but I recognize it is definitely not for all tastes. It won the Golden Lion at the Venice Film Festival. 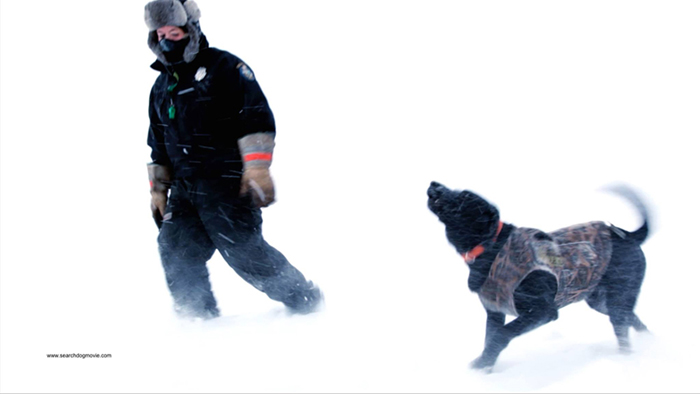 When he was a kid, Matthew Zarella’s struggle with dyslexia was tempered by his love and connection with dogs. Mary Healey’s engaging documentary recounts Zarella’s almost supernatural skill in training Search and Rescue dogs. We see him prepare dogs for a cadaver search test. Intensely dramatic scenes show situations involving murder and suicide. But it is the ordinary moments between Zarella and his dogs that are the most moving. For those who already understand the powerful connection between humans and dogs, this film is reaffirming. But for those who have never experienced a first-hand relationship with these extraordinary canine friends, guardians and co-workers, it is a revelation. As Zarella reminds: “I have always felt that dogs had a higher purpose on this earth, and it was up to the humans to make that happen.”