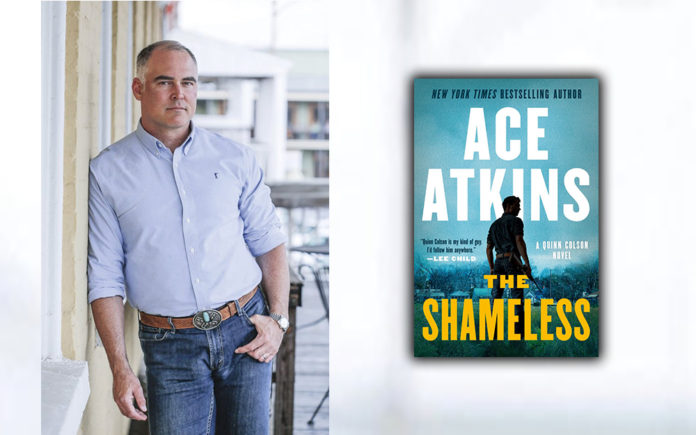 We are a nation of laws and nobody is above the law.  At least that’s how it’s supposed to be.  It seems those who hold power believe differently.  Perhaps that’s because they have been bending the law for so long, they think they can get away with breaking it.  In Ace Atkins, The Shameless: A Quinn Colson Novel (Putnam, 446 pages) not even an heroic Sheriff can win against depravity and rampant corruption.

This is Atkins’ ninth Quinn Colson novel and it is filled with returning characters both good and bad.

Two New York bloggers arrive in Mississippi to investigate a twenty-year-old crime.  The women are young and fish-out-of-water in the South.  But, they know a good story when they see one and they sense a cover-up.

Brandon Taylor was 17 when he disappeared on a hunting trip.  He was found dead weeks later of a gunshot wound.  Colson’s uncle was the sheriff at the time and he declared it a suicide.  No one believed it, but the case was closed and nothing else was done.  Colson and his new wife went to school with Brandon.  Colson himself becomes a suspect.  What really happened may never be known because everything from the coroner’s report to the investigation notes disappeared.

As the bloggers dig into the old case, Colson and his team of hardworking, dedicated badasses are trying to break the drug running, human trafficking crime syndicate that dominates the region.  The local Madam, Fannie Hathcock, battles for territory with the Dixie Mafia who want in on the Native American’s casino.  Then there’s the county commissioner who believes erecting a gigantic cross can fix the whole mess – all the while hoping to keep his own dirty little secrets quiet.

As the good guys chase down the bad guys, the sleazy former state senator runs for governor.  If there is a problem, he has a group of thugs called the “Watchman” who beat-up people.  Of course, he has ties to all the wrong people, but claims all the proof and rumors are “Fake News.”  He promises to bring back “Simpler times” and return the state to its “glorious past.”

As Colson closes in, the Watchmen seek to shut him out, and the senator wins by a landslide.

Author Atkins is not afraid to have serious violence happen to his protagonists.  They have flaws, get shot and worse!

I was particularly glad to see the return of Caddy, Colson’s sister whom he rescued in a previous novel.  Now, she is sober, and running a shelter for women and children.  She has a son who is half black – she was pregnant at the end of the last story with an unknown father.  I liked that she and her son have a close relationship and she is helping other women.  I was rooting for Caddy and her love interest.  It surprised me when she called it off.

I wanted more time with the Brandon storyline and investigation.  It felt like the bloggers were there to appeal to a younger audience rather than involve themselves with solving the crime.  The book opens with their blog, but we never get to hear how they report the story.

There is a lot going on in this Colson installment.  It helps to know the people.  I’m not sure I would be patient enough to follow the story if I hadn’t already known and invested in these characters.  It is likely all the new folks we meet in this story will be back again, because there is no actual conclusion.  That’s what makes this series fun for some and, I’m sure, disappointing to others.

It may seem like there are Trump-like caricatures and even bashing in The Shameless, but it is how the bad guys now operate in the real world.  Bully, badmouth and deny.