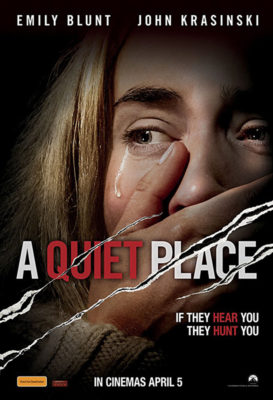 I’ve always been drawn to stories, movies and art that in some way examined or even exploited fear as a subject.

I don’t know what it is about reading a scary story or watching a horror film that’s so satisfying.  Maybe it’s the feeling of facing a fear and surviving.  But for me, it’s something more: it’s cleansing.  Kind of a detox for the psyche.

With that in mind, A Quiet Place  is among the most gripping, frightening and satisfying of recent films.  It’s more than a minor masterpiece because as visceral as it is, it is also smart and emotional.  If you are looking for a film that will not disappoint, please don’t miss this relentlessly bone-chilling Oscar-worthy exploration of pure fear as a family of four confronts the unearthly terrors of a post apocalyptic world.  This one gets my strongest recommendation.

Writer, director and actor John Krasinski, along with co-writers Bryan Woods and Scott Beck have fashioned a superior exercise in unfiltered terror that seduces the audience with it clever conceit and extraordinary execution. 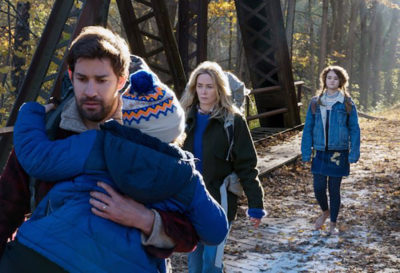 This alien invasion monster movie is unlike anything you have seen.  The Abbot  family (Krasinski, Emily Blunt, Noah Jupe and Millicent Simmonds and Cade Woodward) must survive the aftermath of global destruction and avoid sharp fanged big-eared monsters that hunt by sound alone.  I’ve never been in a theater where the exquisitely subtle and brilliant sound track became so enveloping it was almost palpable.  I don’t think I heard a single cough or rustle of a popcorn bag from the audience.  I was virtually glued to my comfy reclining seat and assume everyone else was as well.

Krasinski is a filmmaker to watch.  It’s fun seeing him and real life wife Emily Blunt together on the big screen in this beautifully crafted movie.  The young actors playing their kids are also really good but it’s Millicent Simmonds, deaf in real life, who stands out – her character’s hearing aid is also a significant part of the plot as is the family’s use of sign language.

Now showing at he beautifully refurbished Mary Pickford D’Place for Entertainment.  My pick for the best sound, picture, seating and snacks in the CV. 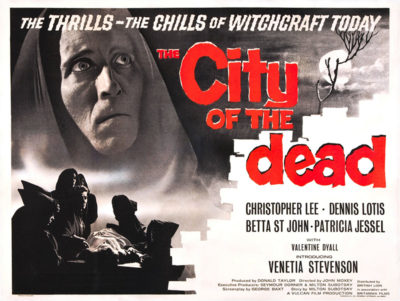 Nan Barlow (Venetia Stevenson) is a pretty young college student researching the history of witchcraft.  Her mom and fiancé taunt her when she says she wants to visit a historical location pertaining to her occult studies.  Even so she arms herself with resolve and drives to the sleepy Massachusetts town of Whitewood to do further research.  But her unnerving time at the eerie Raven’s Inn takes a dark turn when she realizes its proprietor, Mrs. Newless (Patricia Jessel), is in fact the reincarnation of a witch burned at the stake in 1692!

This unexpected revelation confirms an unwelcome truth about the town: that it is really a coven of modern witches who have a sinister plan to sacrifice humans so that they can become immortal.  Uh-oh. 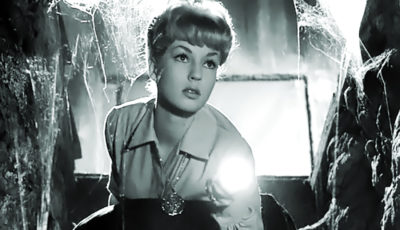 The best things on this stunning 2K transfer/restoration are the richly detailed commentary from Lee and his revealing 45-minute video interview.  In both, he covers a wide rang of fascinating observations beyond the film itself – especially about acting and the conflict of good and evil.  Originally rated R.  VCI Ent/MVD Visual.  Blu-ray.  Recommended.