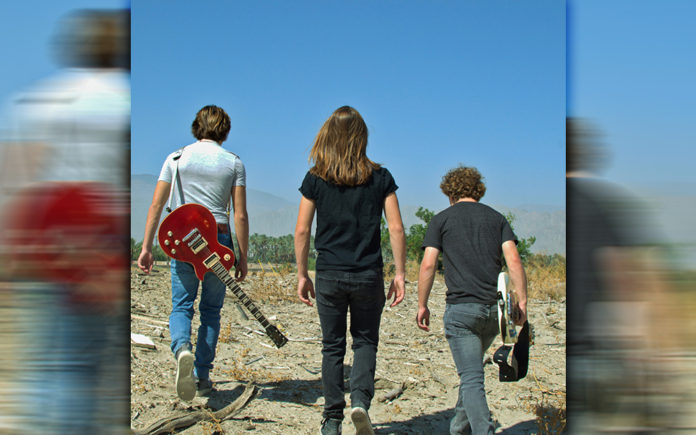 Together for five years and having already played Whisky A Go-Go and Pappy and Harriet’s as well as performing at Stagecoach Music Festival, Silver Sky are the teenage heartthrobs of the Coachella Valley. If this were the late 70’s, Noah Arujo (guitar and vocals) Nick Willman (drums and vocals), and Jake Sonderman (bass and vocals) would be embellishing the cover of Tiger Beat magazine thanks to good looks, Rock and Roll and big hearts.

On Friday, October 4th Silver Sky will be sharing their first single, “Brain Blind” with the world. The song will be available on all digital platforms and the band will be performing at The Hood Bar & Pizza in Palm Desert with support from Metal masters INSTIGATOR and the hard and heavy U.U. This milestone is achieved thanks to the band’s hard work, dedication and generosity.

In 2016 the band, then known as D-Tension, raised $3,600 by way of the Play It Forward campaign for The Sweet Stuff Foundation, the non-profit organization founded in 2013 by Eagles of Death Metal co-founder Joshua Homme to provide assistance to musicians and their families in times of need, as well as musical education and gear for the next generation. The money was donated to victims of the 2015 Paris attacks. Participating artists were asked to cover the EODM song “I Love You All The Time” from its album Zipper Down. The band recorded a video of the song with help from YIP YOPS front man Ison Van Winkle then donated the money generated from a GoFundMe effort. Other artists who recorded the song included FLORENCE + THE MACHINE (FEATURING THE MACCABEES), KINGS OF LEON, ED HARCOURT, IMAGINE DRAGONS, MY MORNING JACKET, SAVAGES and JIMMY EAT WORLD.

In 2018 the band was featured in a nationwide in-store campaign in Vans stores where you could catch a glimpse of photo murals “on the wall” of the band performing. So, you can kind of see where this is going. Silver Sky is breaking new ground for rock bands from the desert. They lead with their hearts and have the experience and musicianship to validate their intentions.

Coachella Valley Weekly sat down with Arujo, Sonderman and Willman on a break from rehearsal to discover more about their plans.

Sonderman: “We’ve been in and out of the studio with Arthur Seay recording our first single called ‘Brain Blind.’”

CVW: For those who may not know about Silver Sky, please describe your sound.

Arujo: “We don’t sound like anything. We are a hard rock band.”

CVW: What was it like recording with Arthur Seay at Bittersand Studios in Indio?

Arujo: “We spent a weekend where we went in all day each day. We had never been in a real studio before. Arthur guided us through all of it. We had our stuff really tight but to hear it come to life on the speakers was a whole different experience.”

Willman: “Usually twice a week we get together. We’re always writing.”

CVW: How are you feeling about your Single Release show for “Brain Blind” at The Hood?

Arujo: “We’re looking forward to it. We’ll be performing mostly originals and a couple of covers we like to play. We have an album’s worth of material.”

CVW: Why did you choose “Brain Blind” as your first single?

Sonderman: “It’s always been the show closer and our go-to song. It was one of the first songs we wrote and one of our catchiest. It’s got a little bit of everything for everyone.”

CVW: You all met & connected at Academy of Music Performance (AMP). How far you have you come as artists?

Arujo: “We are appreciative of AMP and what they did for us. We are thankful to our parents as well. We’ve come into our own. We’ve been playing together long enough where we have that experience. In the past couple of years, we’ve done all our own stuff. We book our own shows, we handle all the money and social media ourselves. It’s a lot. We realized how much our parents were doing for us. We’ve had a lot more say in what we do.”

CVW: I heard you are all eligible bachelors. Is this true? Any girlfriends?

Sonderman: “None of us have girlfriends.”

CVW: If I asked Will Sturgeon, Executive Director of AMP, how he felt about three of his most successful students, what would he say?

CVW: What are your immediate plans after The Hood show?

Willman: “We want to keep the hype going after this show. We’d like to play some other shows as opening acts. We have another single release planned at the end of the year and are hoping to release the album at the beginning of 2020.”