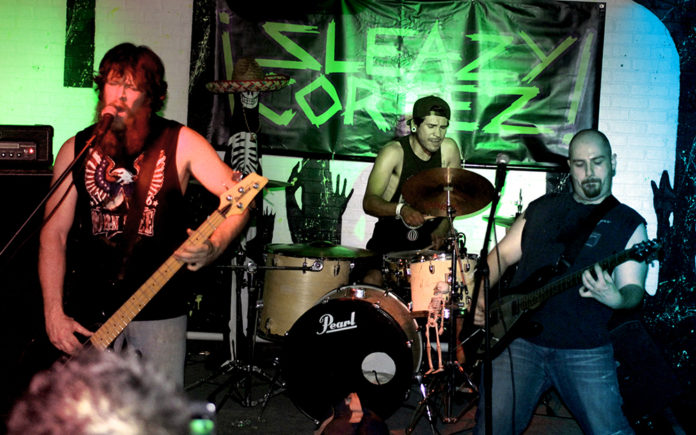 Sleazy Cortez sounds like an illegal wrestling move that could be easily misconstrued as a deviant sexual act. Well it’s neither one of those, well…sort of. Sleazy Cortez is a three-piece desert rock band that features Derek Wade Timmons on bass and vocals, Nick Hales on guitar and vocals and Damian Garcia on drums. Don’t let the name fool you, they are as dirty as the Dirty ‘D’ can get…in a good way. They rock like no other band I’ve seen or heard. As much as they are rehearsed, they are also spontaneous and can delve into the improvisational side of things. On Friday, March 15, 2019, Sleazy Cortez will be performing at the Date Shed along with lounge-punk-surf-rock mythological band Mighty Jack and Cult stalkers Aphrodisiac Jacket. Entry fee is $10. You can purchase tickets online at eventbrite.com or you can purchase at the door beginning at 7:30 p.m. on the night of the show. We spoke with Timmons because Hales doesn’t wake up until after noon and Garcia is a phantom.

CVW: This is your first time performing with Sleazy Cortez at the Date Shed. What do you expect and what should attendees expect?

Timmons: “We’re really looking forward to playing that big of a stage so we can run around more. We’ve got a pretty unusual set worked up, with a lot of variations and things as of yet unrecorded. Hoping to get some CDs and shirts into some Indio folks’ hands.”

CVW: Where is Sleazy Cortez based?

Timmons: “We recently moved our base of operation from the ‘Fabulous Salton Sea’ to ‘Thirsty Thousand Palms.’”

CVW: What is Sleazy Cortez up to currently?

Timmons: “Hmm, demoing out songs for our next record at the moment, really just been jamming a lot lately, still make time for jams twice a week despite us all being in so many other projects!”

CVW: What are the advantages/disadvantages of whoring yourselves to other bands? How does that benefit Sleazy?

Timmons: “Ha Ha! I think it lets us meet more people and spread the ‘Gospel of Sleaze’ and get things out of our system that aren’t necessarily Sleazy material, as well as bringing entirely new sets of influences for us all to bring home and dissect.”

CVW: Is it safe to say that Sleazy Cortez is your priority?

CVW: What does a ‘musical difference’ between Sleazy Cortez look like?

Timmons: “Ha Ha! We don’t really have too many musical differences. Probably the main thing would be me getting too hillbilly or Damian getting too metal, but we just keep jamming til it’s Sleazy, which it always is. I mean, is anything really too redneck or too metal?”

CVW: Have there been any other Sleazy members?

Timmons: “We started off with Luiz Carranza on drums, and recorded Trailer Trash Blues and Piss Drunk Punk EP with him, but Damian’s been our guy for two years now, and he’s brought a whole helluvalot o’ groove. Luiz is still going strong with Robotic Humans, where Damian now plays bass. And of course Nick and I have both played bass in RoboHum as well.”

CVW: What do people need to know about your Sleazy bandmates?

Timmons: “Nick can play the shit out of damn near any style of music, and that white boy got da blues. Damian is a swingin’ beat machine and (as the world will see at The Sweat Act reunion show) a heckuva four-stringer as well.”

CVW: How has 2019 gone thus far? Can we expect new music from Sleazy Cortez?

Timmons: “Hmmm, good! Got into a much larger practice pad (with air conditioning, and more than one working outlet?), and the band is sounding super tight. Jams are better than ever. I have a whole shit-ton recorded on my phone. Anyone want to buy them?”

CVW: How are Death In Pretty Wrapping and Diesel Boots treating you?

Timmons: “Diesel Boots is awesome! Getting to work with such talented dudes as Collyn McCoy (of The Ultra Electric Mega Galactic and Aboleth), Corey Dean Little (Motorsickle), and Trent Ramseyer (Whores of Tijuana, Ogressa) has been a blast. Getting to do something twangy is something I’ve been interested in for a long time. Stoked to play The Hood this Saturday. Totally worth the 255-mile drive to band practice! And playing with DiPW is always stimulating and we have a big show coming up in Vegas yeeeahhhuh Planet Desert Rock in Vegas May 17 with John Garcia and whoever the heck else.”

Check out Sleazy Cortez LIVE as they trash the Date Shed on Friday 3/15/19.