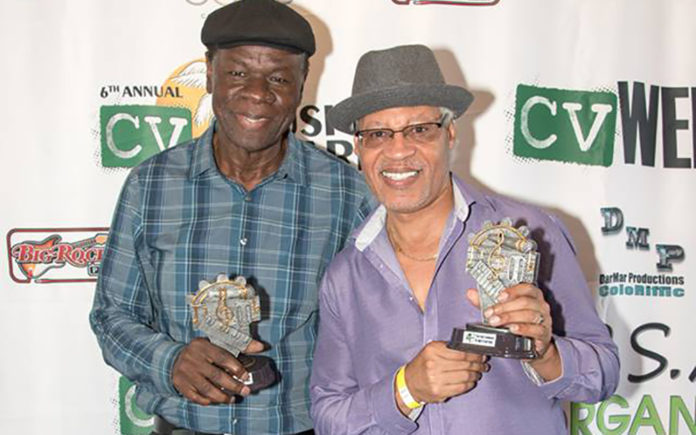 Congratulations to John Carey (guitarist) and Theo Coakley (keyboards), the Smooth Brothers for winning the 2018 CV Music Award for Best Adult Contemporary. They dazzled the audience when they opened the awards show with some heart pumping Latin music and some soulful blues. When they were announced as the winners, John quipped “After 23 years it’s great to get an award.” They were both gracious winners.

I haven’t seen The Smooth Brothers in a couple of years. So it was great to see what a great selection of music that they performed. Carey mentioned they do jazz, soul, blues, reggae, R&B, funk and basically anything you want. In a Jewish Italian wedding they are going to play, they are performing both Jewish and Italian music, they will play anything you like.

During the summer they will be playing at Big Rock on Wednesdays, Mondays at Woody’s in Palm Springs with Motown Mondays, Shanghai Reds on Thursday nights and Sundays at the new Woody’s in Moreno Valley. Busy guys!

John has a great musical history. His first gig was with the Chi-Lites. John’s had great musical successes this year as well, his song “Don’t Walk Away” was #1 in the Smooth Jazz UK and stayed there for 6 weeks.

His new group ‘Funk Attack’ debuted at Big Rock Pub in Indio. Prince, Morris Day, Cameo, Gap and other hitmaker songs all in a fun, retro style that brings you back to those great times and that wonderful music.

This is a five piece band complete with horns. Dressed for the part, you know it’s going to be a party in the house with this kind of music.

Another biggie for John is he was just chosen for guitar for the 90’s Singer “O’Bryan” he will be performing in his shows on the road. O’Bryan had three #1 hits in the 90’s. He has a funky R&B, smooth sound. Carey compared him to Kenny Latimore. His first gig will be at ‘Funkfest’ in Anaheim in August at the Honda Center for an expected crowd of 20,000. Go John!

John suffered two major health crises over the last couple of years. The first was a heart blockage which resulted in a pacemaker. The second was a diagnosis of leukemia. After chemo, he’s been in remission for 5 months now and feels great. He said this is his third chance and he’s going to make the most of it. He said he is very happy to be alive.

Theo hails from the Bahamas and had #1 hits with this band ‘The T Connection’. He had 2 number 1 hits on Capital records in the R&B category. They performed on American Bandstand, Soul Train and other shows. He still performs with them today. Theo and John met in 1989 and formed ‘The Smooth Brothers’. They have been playing for 21 years. John noted that once they land a gig they keep them. He’s been at his Shanghai Red gig for 6 years already.

I will be booking The Smooth Brothers in the Temecula Market. If you want to book them for a party or a venue contact me at 1-702-219-6777. Expect a great show every time you hear The Smooth Brothers. Visit John Carey on Facebook.