The Grand ‘Ol Party does not like President Obama very much. As they cannot beat him in the election booth, they are doing things like suing him and threatening impeachment. Why?

Speaker of the House, John Boehner, plans on suing the President for failing to enforce all of the elements of the Affordable Care Act a/k/a Obamacare. Stated differently, Boehner is upset that Obama is not enforcing all of the provisions of an Act that Boehner and the GOP have tried to abolish at least fifty times. Boehner is not interested in suing Obama for the improper use of work permits in order to keep the refugee children in the United States. Could it be that Boehner is hoping for a rescission of child labor laws? Boehner and his Republican cohorts are really upset over Obama’s failure to fully enforce one law that they really hate.

Be upset over failures to enforce all laws – not just the ones you dislike.

I wonder if Boehner might also take action on some other unenforced laws. In his home state of Ohio alone, it is illegal for women to wear patent leather shoes in Cleveland. Women also cannot disrobe in front of a picture of a man or serve as hotel bellhops.
Our most right Congresswoman, Michele Bachman, has joined the chorus of Republicans who feel that Obama should be impeached. As Obama has not abused a cigar (although he is known to sneak a cigarette), what did he do to warrant impeachment saber rattling?

The GOP have a laundry list that includes Obama’s association with Tony Rezko, ACORN, his birth certificate, support for union jobs, help for woman-owned car dealerships, anything he has ever said or done related to Obamacare, using his office to influence people to support his initiatives and killing an American who was part of Al Qaida by using a drone. More serious issues currently under investigation include the IRS targeting of conservative non-profits and the spying on news gathering organizations in order to stop White House leaks of confidential information.

Looking back a few years at the Bush Administration, they most certainly broke the law by performing wiretaps on Americans including Keith Olbermann and other news reporters. In the Iraq War, they committed war crimes by violating the Geneva Convention through various forms of torture on enemy combatants. The fabrication of ‘acts’ to get the United States into the war was another impeachable offense. While a few Democrats suggested that Bush should be impeached, it never reached the hysteria that is currently sweeping Congress.

While transgressions by people in positions of power are unacceptable at all levels and in all ways, these rantings by the GOP sound more like sour grapes than an honest effort to cease abuses.

Cases in point include the comparing of Obama to Hitler or schoolyard taunts where Obama is called a ‘tyrannical despot’ or King.

Despite constant calls for impeachment, chorus leaders like Representative John Duncan say that they will not begin impeachment hearings as this might turn independents away from the GOP while firing up the Democrat base in advance of mid-term elections. As a point of edification, tyrants, despots and Kings do not really care about elections – a look at Syria or Russia proves this.

While 47% of all Americans feel that Obama is doing a good job, only 25% feel that America is going in the right direction. Meanwhile, Boehner and the GOP-led Congress have an 80% disapproval rating. They would be doing themselves and our country a great service of historic proportions if they actually worked on creating comprehensive plans meant to solve America’s serious and growing list of problems. 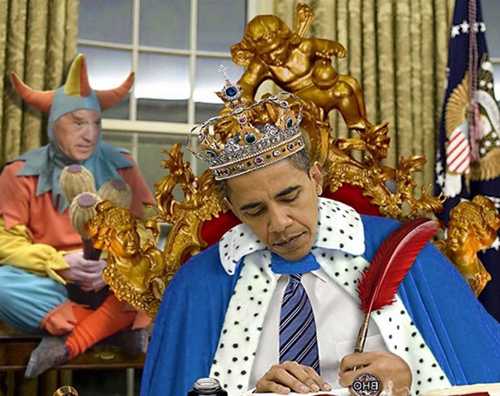